‘Is it lawful to do good or
to do harm on the sabbath?’ 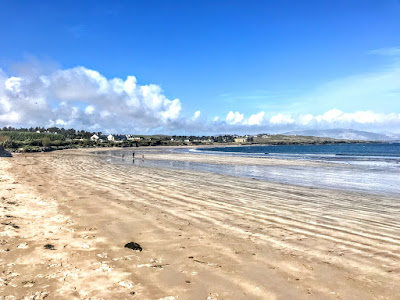 God’s counsels are ‘more in number than the sand’ … the beach at Ballinskelligs, Co Kerry (Photograph: Patrick Comerford, 2018)

This has been glorious summer weather for the past week. On my journeys up to Dublin and back down, I have travelled through countryside watching people working in the fields until late in the evening, taking advantage of the long days and the warm sunshine before the darkness begins to settle in.

And even then, the full moon has allowed some farmers to work much later than they expected. Some fields have been busy right up to 11 at night.

This morning, in our reading from Saint Mark’s Gospel (Mark 2: 23 to 3: 6), we are invited once again to join Christ on his journey with the disciples on their way to Jerusalem, and we are also challenged in the other readings to think about walking out of darkness into light, from oppression to freedom.

This Gospel reading talks about the feeding and healing we experience in our lives when we rest in God.

So I want to talk about just three things from our readings this morning: 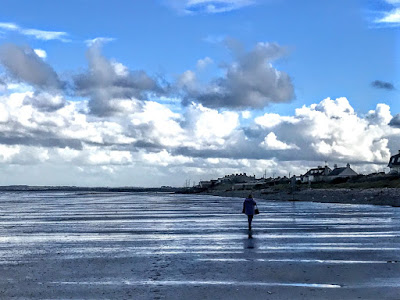 ‘You mark out my journeys and my resting place … you encompass me behind and before’ (Psalm 139: 2-4) … a lone walker on the beach at Laytown, Co Meath (Photograph: Patrick Comerford, 2018)

In his 1980 bestseller, Cosmos, the astronomer Carl Sagan (1934-1996) calculated that there are more stars in the heavens than all the grains of sands covering the world’s beaches. He calculated that a handful of sand contains about 10,000 separate grains.

But how many grains of sand cover the earth’s beaches?

Some years ago, researchers at the University of Hawaii tried to calculate this number by dividing the volume of an average sand grain by the volume of sand covering the Earth’s shorelines. The volume of sand was obtained by multiplying the length of the world’s beaches by their average width and depth. The number they calculated was seven quintillion five quadrillion (that is 7.5 followed by 17 zeros or 7.5 billion billion) grains of sand.

This is a staggering number: 70 sextillion (or 7 followed by 22 zeros or 70 thousand million million million) stars in the observable universe. And that is probably a very, very low estimate because the number of galaxies filling the Universe is thought to be much larger than those the Hubble can see. 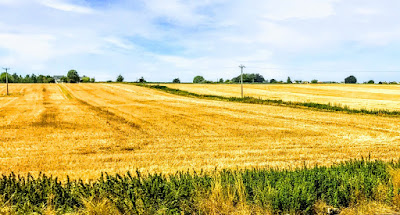 ‘As they made their way [through the grainfields] his disciples began to pluck heads of grain’ … grain fields near Cambridge (Photograph: Patrick Comerford)

The first part of Gospel reading (Mark 2: 23-28) begins when Christ is bypassing the grainfields and the disciples make their way through the fields. The religious law of the day accepted that as long as they are plucking the heads of grain and not harvesting it, they are allowed to so this, and there is no question of any theft (see Deuteronomy 23: 24-25).

So, what concerns the Pharisees here is not theft. They are worried that the disciples are gleaning on the Sabbath, and they challenge Christ about this. They claim this behaviour ignores the command to observe the Sabbath and keep it holy (see Exodus 20: 8; Deuteronomy 5: 12). Perhaps they thought the disciples could have prepared food the previous day to take with them.

Jesus disagrees, not because he is trivialising the laws about the Sabbath, but because he sees the Sabbath in a different light. He turns to a story about David, who is fleeing Saul who is plotting to kill him (see I Samuel 21: 1-6). David takes consecrated bread that was supposed to be part of the 12 loaves reserved for the priests (see Leviticus 24: 5-9) and feeds it to his followers who are on the journey with him.

By meeting the needs of David’s hunger, the priest sustains the life of a weary traveller and contributes to David’s quest to fulfil his calling to be the king anointed to replace Saul (see I Samuel 16: 1-13).

Why, in this story, does Jesus identify the priest who assists David as Abiathar? The Old Testament account (I Samuel 16) names the priest as Ahimelech. Who is mistaken in this passage … Jesus? Saint Mark? An unknown and unidentifiable redactor?

There are details here that are not in the original story: David was not explicitly acting from hunger, and he does not enter the house of God to eat the bread of the presence.

I have read many attempts to reconcile this Gospel account and the story of David, most of them setting out with the premise that the ‘inerrancy’ and ‘infallibility’ of Scripture must be defended at all costs, without seeking to debate the literary genre found in this passage.

Instead, Christ is displaying a sense of irony and a sense of humour here. He asks his protagonists: ‘Have you never read what David did … when Abiathar was high priest?’ (verses 25-26).

If they say no, they show they have not read this story; if they say yes, they show are not truly familiar with the details of the story?

Christ then offers a legal opinion derived from scripture itself. He argues that sometimes certain demands of the law are rightly set aside in favour of greater values or needs, especially when those needs involve someone’s well-being, and this can bring God’s blessings.

With his subtle sense of humour, Jesus challenges us when we are too straight-faced and humourless, and put our minor interpretations of petty values before the real needs of others, and their sense of fun and enjoyment of life. 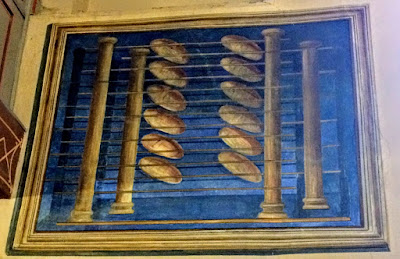 ‘He entered the house of God … and ate the bread of the Presence’ (Mark 2: 26) … 12 loaves of bread in two rows of six (see Leviticus 24: 5-9) depicted in a fresco in the 17th century Kupa Synagogue in the old Jewish quarter of Kazimierz in Kraków (Photograph: Patrick Comerford)

The second part of the Gospel reading (Mark 3: 1-5) is set once again on the Sabbath, but this time in a synagogue. But even before the healing takes place, a debate begins. This debate is not about whether Christ has the right or the power to heal the man’s withered hand, or even whether it is appropriate for him to do this in a synagogue, but whether doing this on the Sabbath shows disdain for the law of God.

Of course, the man is not dying, although his hand is withered, and this act of healing could take place on any other day, indeed at any other venue.

Even before they speak, Christ’s response to his potential protagonists is once again to ask a question: ‘Is it lawful to do good or to do harm on the sabbath, to save life or to kill?’ (verse 4).

If they say no, they show their ignorance of the law and the rabbinical tradition; if they say yes, how could they possibly disagree with what they know he is about to do?

Once again, the irony and humour of Jesus trump suspicion and disdain on the part of those who are watching but doing nothing.

In our Collect this morning, we pray that ‘in the keeping of your commandments … we may please you, both in will and deed.’

What better day is there than the Sabbath, a day meant to promote God’s commitment to humanity’s well-being, for the restoration of a man’s malformed hand? In doing so, Christ allows him to return to work with dignity, and restores him to his full and rightful place in the community of faith that may have been denied to him by the very people who are present that day. 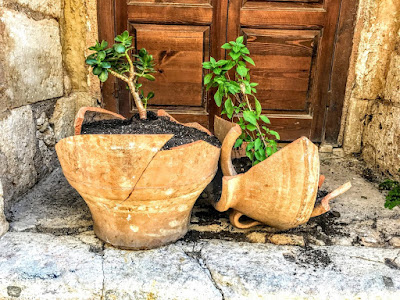 ‘But we have this treasure in clay jars’ (II Corinthians 4: 7) … clay jars on a window sill in Rethymnon in Crete (Photograph: Patrick Comerford)

In conclusion, what better way of honouring God’s great Sabbath, the coming kingdom, than seeing the hungry are fed, the sick are healed, those on the margins are restored to their place in the heart of society?

We can do this conscious of God’s great majesty, yet with a sense of Christ’s good humour.

In our epistle reading (II Corinthians 4: 5-12), Saint Paul seems to be saying that we are living in a new creation: ‘Let light shine out of darkness’ (verse 6), which is both the light of creation (see Genesis 1: 3) and the ‘light of knowledge of the glory of God in the face of Jesus Christ’ (verse 7).

Saint Paul is saying that all that distorts and spoils our created goodness dies in Christ and that Christ’s life is manifest as the flourishing of new creation in our lives. Just as humanity is created out of the clay (see Genesis 2: 7), we are ‘clay jars’ – cheap and fragile – but in those clay jars we hold that great treasure which is our life in Christ.

Cheap and fragile we may be, but we are called to be like Christ. 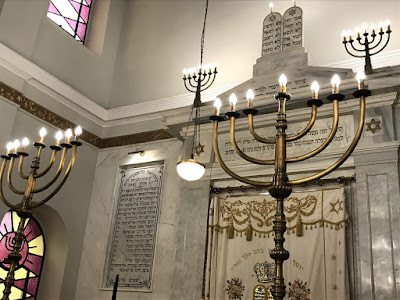 ‘The lamp of God had not yet gone out’ (I Samuel 3: 3) … the lights in a synagogue in Thessaloniki (Photograph: Patrick Comerford, 2018)

(Revd Canon Professor) Patrick Comerford is the priest-in-charge, the Rathkeale and Kilnaughtin Group of Parishes. This sermon was prepared for Sunday 3 July 2018, the First Sunday after Trinity (Trinity I)

‘The lamp of God had not yet gone out’ ... candles in a church in Thessaloniki (Photograph: Patrick Comerford, 2018)