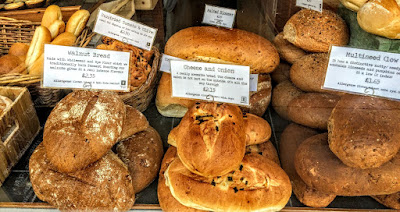 ‘Let us break bread together, we are one’ (Hymn 428) … bread in the window of Hindley’s Bakery and Café, Tamworth Street, Lichfield (Photograph: Patrick Comerford)

We all love parties and anniversaries.

Recently, we have been blessed in this group of parishes with a number of baptisms and weddings.

In recent weeks too, I have also enjoyed taking part in the events marking the 850th anniversary of the foundation of Saint Mary’s Cathedral, Limerick.

And, this Sunday is the Fifth Sunday in a summer month, we are here together in this group parishes for our joint celebration of the Eucharist in the Rectory Garden, followed by the parish summer barbecue.

This all seems to add an extra context and relevance to this morning’s Gospel story of the feeding of the multitude.

Parties affirm who we are, where we fit within the family, and mark the rhythm of life and the continuity of community.

Even though in our Epistle reading (Ephesians 3: 14-21) Saint Paul alludes to the fact that there are different families, he reminds us that there is a unique way in which we, as Christians, are members of the same family, a particular family, the Church, the family of God.

Families share names, share stories, share memories, share identities, share anniversaries. And that is not all in the past. These celebrations allow us to express and share our hopes for the future too ... is that not what baptisms and weddings are about in every family – hope for the future, hope for life itself?

The stories of the feeding of the 5,000 and of Christ walking on the water are familiar to us from the other three gospels. But Saint John presents these stories in a slightly different way this morning (John 6: 1-21).

The story of the multiplication of the loaves as Saint John alone tells it has a number of key details, such as a Passover context, that are there to remind us of our feeding at the Eucharist and of Messianic hope for the future.

In this story, the disciples have failed to buy or produce enough bread for a meal. Christ responds not by sympathising but by demanding great generosity, so great that it would take six months’ wages to be so generous.

Barley loaves were the food of the poor, and so the boy’s offering symbolises the poverty of the people, while the disciples fail to offer from the riches of the kingdom.

Christ is going to tell the people he feeds, and the disciples too, that he is the bread of life, and that whoever comes to him will never be hungry, whoever believes in him will never be thirsty (see John 6: 35).

The feeding with the fish looks forward too to a later meal by the shores of Tiberias … that breakfast with the disciples when the Risen Christ feeds them with bread and fish. The fish is an early symbol of faith in the Risen Christ: Ichthus (ἰχθύς, ΙΧΘΥC) is the Greek word for fish, and can be read as an acrostic, a word formed from the first letters of words spelling out ἰησοῦς Χριστός, Θεοῦ Υἱός, Σωτήρ (Iēsous Khristos Theou Huios, Sōtēr), ‘Jesus Christ, Son of God, Saviour’.

Christ asks the disciples to make the people sit down – well, not so much to sit down as to recline. They are asked to recline on the grass as they would at a banquet or at a feast – just as Christ does with the disciples at the Last Supper.

And then, in a Eucharistic sequence, he takes the bread, blesses or gives thanks, breaks it and gives it. John here uses the word εὐχαριστήσας (eucharistisas, verse 11), from the verb εὐχαριστέω (eucharisteo), ‘to give thanks,’ the very word from which we derive the word Eucharist in the liturgy.

Saint John alone tells us that Christ later tells the disciples to gather up the fragments lest they perish. Gathering is an act of reverential economy towards the gifts of God; but gathering also anticipates Christ gathering all to himself (John 6: 39; see also John 17: 12).

Look at the amount that is left over in the outpouring of God’s generosity. There are 12 baskets – one for each tribe of Israel and one for each of the 12 disciples. God’s party, the Eucharist, looks forward to the new Israel, not the sort of earthly kingdom that the people now want but the Kingdom of God.

Christ puts no questions of belief to the disciples or to the crowd when he feeds them on the mountainside. They do not believe in the Resurrection – it has yet to happen. But he feeds them, and he feeds them indiscriminately. The disciples want to send them away, but Christ wants to count them in. Christ invites more people to the banquet than we can fit into our churches.

When we invite people into the Church, we have so much to share – must more that the meagre amount people may think we have in our bags.

‘Where are we to buy bread for these people to eat?’ (John 6: 5) … bread on sale in a bakery in Platanias near Rethymnon in Crete (Photograph: Patrick Comerford) 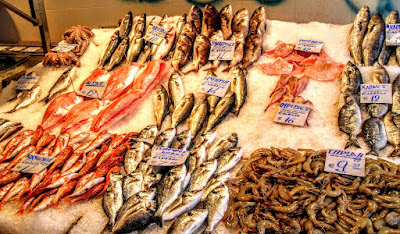 ‘There is a boy here who has five barley loaves and two fish’ (John 6: 9) … fish on a stall in the market in Thessaloniki (Photograph: Patrick Comerford)

Holy Father,
who gathered us here around the table of your Son
to share this meal with the whole household of God:
In that new world where you reveal the fulness of your peace,
gather people of every race and language
to share in the eternal banquet
of Jesus Christ our Lord. 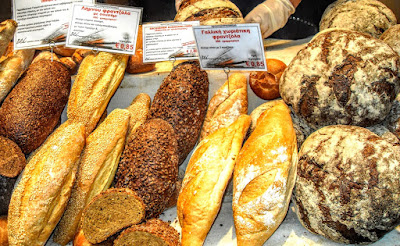 A variety of bread in a shopfront in Thessaloniki (Photograph: Patrick Comerford)