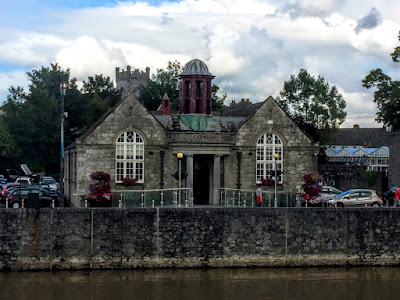 The Carnegie Library on John's Quay, Kilkenny, the gift of Andrew Carnegie and the Countess of Desart (Photograph: Patrick Comerford)

When I first took an interest in researching the genealogy and history of the Comerford family almost 50 years ago in the late 1960s, one of the first libraries I used was the Kilkenny City Library on John’s Quay.

In a day when libraries were often dour and lacking in adequate library, the staff there were cheerful and helpful, and they generously allowed an enthusiastic teenager on day trips open-shelf access to important sources such as William Carrigan’s four-volume History of the Diocese of Ossory.

It was a time long before the internet offered so many facilities to genealogical researches, and I am reminded of their cheerful attitude each time I see the library in its attractive setting on the banks of John’s Quay, reflected in the waters of the River Nore.

The library, which opened in 1910, was built through sponsorship from Andrew Carnegie (1835-1919). It was designed prepared by the Tyars and Jago practice in association with E Stewart-Lowrey and Son on a site donated by Ellen Odette Cuffe (1857-1933), Countess of Desart, widow of William Ulick O’Connor Cuffe, 4th Earl of Desart.

Lady Desart was born Ellen Odette Bischoffsheim in London, and became a philanthropist and politician, as well as President of the Gaelic League. She could be described as the most important Jewish woman in Irish history.

She was the daughter of Henri Louis Bischoffsheim, a wealthy Jewish banker of German origin. He was responsible for founding three of the largest banks in the world: the Deutsche Bank, Paribas Bank, and Societe Generale. She married William Cuffe (1845-1898), 4th Earl of Desart, in Christ Church in Down Street, Mayfair, on 29 April 1881. Her younger sister, Amélie Bischoffsheim, married Sir Maurice FitzGerald, 20th Knight of Kerry. For much of their life, the couple lived at Desart Court, between Kilkenny and Callan.

The library on John’s Quay is one of the many philanthropic projects in Kilkenny she sponsored with or in memory of her brother-in-law, Captain Otway Frederick Seymour Cuffe (1853-1912), a former Mayor of Kilkenny. Other projects included Aut Even Hospital (1915) and the Desart Hall. She also established local woodworking and woollen industries.

This Carnegie Library. is a distinctive landmark in the streetscape of Kilkenny. It is a detached, three-bay, single-storey classical-style building, with an elegant bowed Doric portico at the centre, single-bay, single-storey, gabled flanking end bays, and four-bay, single-storey side elevations. The classical theme of the composition is enhanced by finely-detailed dressings to the window openings, and an open work steel turret on an octagonal plan with a copper-clad square-profiled base and a lead-lined ogee dome.

In a cost-effective measure that appealed to Carnegie’s frugal agent, James Bertram (1872-1934), the library was built almost entirely in fine concrete block imitating local Kilkenny limestone. This was an early use of concrete block in the Kilkenny area.

Most of the original fabric has survived in intact, although the unique fittings made by the family-owned Kilkenny Woodworkers Company were removed some time in the 1990s.

Before the library was built, the Kilkenny Circulating Library had a reading room for members in the Tholsel which is now known as City Hall. The annual subscription fee was 11s 4d.

In 1903 and 1904, Kilkenny Corporation agreed to adopt the Public Libraries (Ireland) Act 1855, which allowed the establishment of public libraries in towns with populations of more than 5,000. The Library was to be supported from the rates, but and the maximum rate that could be levied was one penny in the pound.

Kilkenny Corporation approached Andrew Carnegie for a grant to aid the establishment of a free library. The Scottish-born US steel industrialist and philanthropist provided grants for building public libraries in the US, the UK, Ireland and throughout the English-speaking world.

He built and equipped libraries on condition that local authorities provided the site and maintained the service. He promised £2,750 for Kilkenny but then cut this to £2,100 because the rate struck by the Corporation was too low – the rate was to yield £140 but yielded only £105.

The site at John’s Quay was bought for £600 by Lady Desart, who also paid for the furniture. The foundation stone was laid in 1908. The library was handed over to Kilkenny Corporation in 1910 and was opened on 3 November by Lady Desart. Later that day, she was conferred with the Freedom of the City.

Membership of the Library was free to the residents of the borough, but there was a charge for non-residents of 2s 6d or a half crown.

The Reading Society books were transferred to the new library in 1911.

The library was all contained in a square shaped single floor. Originally it had six rooms: a gymnasium used for the library, a reference room, librarian’s room, lending department, reading room and the ladies’ room with an attached toilet.

Until 1972, the Carnegie Library was the only purpose-built facility offering a range of library services in Co Kilkenny. The main changes to the library over the years reflected changes in library practice, as it moved from closed access collections to open access and the rooms were reduced in number.

A country library service did not begin until 1923. The Kilkenny County Library Committee first met that year in the library on John’s Quay. Lennox Robinson attended that first meeting, when Lady Countess of Desart was co-opted to the committee.

Constant debates arose about the censorship of books. On 19 December 1923, for example, it was agreed to remove the works of George Bernard Shaw from circulation.

By 1924, 2,415 volumes had been circulated to various small repositories around the county, known as ‘centres’ and later as ‘adult centres,’ and run by local volunteers. By 1925, 52 centres had been set up around Co Kilkenny, 5,412 volumes were in stock, there were 5.410 registered readers, 2,243 books were in the centres, and 15,820 books had been issued. That year, Kilkenny County Council took responsibility for the County Library Service.

The Kilkenny People reported late last year [25 October 2017] that plans to develop a new city library at 75 and 76 John Street — the former Meubles site — have been shelved in favour of plans to develop the Carnegie library and transform John’s Quay into a cultural quarter.

The chief executive of Kilkenny County Council, Colette Byrne, said the development would be ‘far more than just a library,’ and would offer a multi-functional space of at least 1,5000 sq metres that involves extending the Carnegie Library to the rear.

The proposed designs include the public realm around the library, including the Evans Home building behind the library, towards John Street. The estimated cost of the project is about €4.5 to €5 million, and €2.5 million of that will have to be found locally. The council has plans to relocate the Butler Gallery from Kilkenny Castle to a fully-renovated Evans Home.

As for Lady Desart, she was appointed to the Irish Free State Senate as an independent Senator in December 1922, becoming one of the four women in the new Senate and the first Jew to serve as a Senator in Ireland.

She remained a senator until she died at Waterloo Road in Dublin on 23 June 1933. In her will, she left £1.5 million to the charities she was associated with. She is commemorated in the Lady Desart pedestrian bridge, which was opened beside the library in 2014.