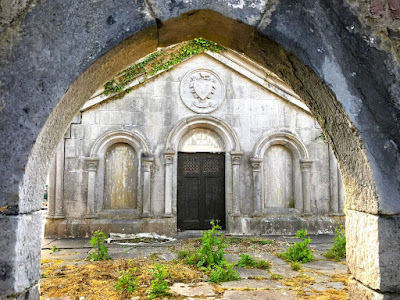 The Vandeleur Vault at Saint Senan’s Church, Kilrush, Co Clare, seen through an arch in the ruins of 1,300-year-old church (Photograph: Patrick Comerford, 2018)

Kilrush in Co Clare has two churches at each end of the town, each named after Saint Senan, the saint associated with Scattery Island and its monastic foundations.

The Roman Catholic Church on Toler Street was built on land at the west end of the town donated by the Vandeleur family of Kilrush, while the former Church of Ireland parish church is on Grace Street at the east end of the town.

It is as though both churches bookend the town.

It is remarkable that a Church of Ireland parish church should be found in the less conspicuous location in a planned Irish town. But the Church of Ireland’s Saint Senan’s Church stands close to the Vandeleur Estate, on the site of an earlier, perhaps monastic church, that dates back 1,300 years, while the Roman Catholic Saint Senan’s stands at the western edge of the town, developed by the Vandeleur family.

As the town spread west, Grace Street and the site of the Church of Ireland parish church became less visible and less central in the life of Kilrush. 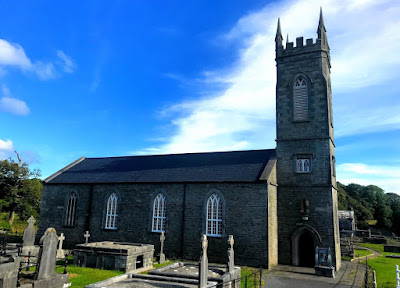 The older, earlier church, stands in the ruins in the churchyard to the south of the later church, dating from 1813. Saint Senan’s Church was designed in 1811 by the Dublin-based architect, Samuel Johnston, who exhibited his design for the church at the Society of Arts of Ireland.

Samuel Lewis described the church as a ‘a large edifice with an embattled tower crowned with pinnacles,’ and that it was built in 1813.

The church has a three-bay nave with a lean-to vestry. There is a pitched slate roof with cut-stone gable copings., and a single-pitched roof to vestry.

The three-stage entrance tower, added around 1840, has cut-stone crenellations and pinnacles to the tower.

The church is built with rubble stone walls and has cut-stone string courses and quoins to the upper stage of the tower. The nave has pointed arch openings with limestone dressings and tracery. The tower has pointed arch and square-headed openings, with cast-iron quarry glazing, label mouldings on the second stage openings and louvers at the third stage openings.

The church has a pointed arch door opening with a flush metal door.

The architect Samuel Johnston studied at the Dublin Society’s School of Drawing in Architecture. He was admitted a freeman of the City of Dublin as a member of the Corporation of Carpenters in 1804.

Johnson had submitted designs in the competition for the new Custom House at Cork in 1808. He was Surveyor of Buildings to the Revenue Commissioners from 1815 or earlier until 1818 or later. During those years, he drew up a set of plans for the Custom House in Dublin that were reproduced as engravings.

Johnston also exhibited several architectural designs with the Society of Artists of Ireland in Dublin between 1801 and 1811. These included a design for the House of Recovery and a design for Nelson’s Pillar in Dublin. 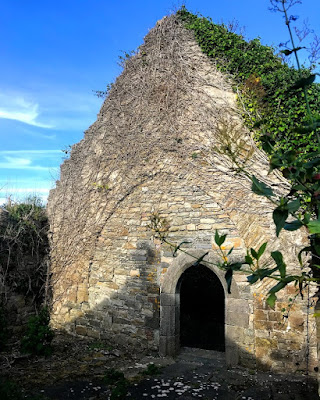 The ruins of the early church in the grounds of Saint Senan’s Church, Kilrush (Photograph: Patrick Comerford, 2018)

The sculptor Thomas Kirk (1781-1845) designed monuments inside the church to John Ormsby Vandeleur, who died in 1828, and Colonel Monument to Col. Seymour Vandeleur. Kirk also designed the statue of Nelson on top of Nelson’s Pillar in Dublin and the statue on the monument to Thomas Spring-Rice in the People’s Park in Pery Square, Limerick.

In 1860, Welland and Gillespie proposed the new robing room and gallery.

Outside Saint Senan’s Church, there are cut-stone piers with cast-iron gates and a wrought-iron lamp holder. The churchyard the ruins of the earlier, 1,300-year-old church, and there is an abundance of cut-stone grave markers and mausoleums, including up to 30 World War I graves and the Vandeleur family vault. 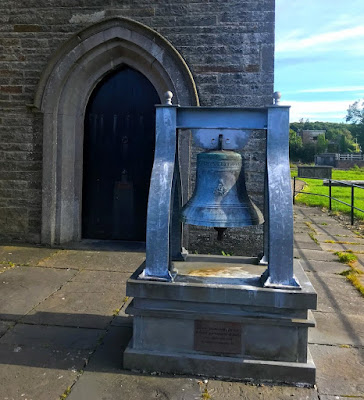 The Clare Champion reported recently that the committee in charge of the upkeep of the graveyard has not met since 2008. 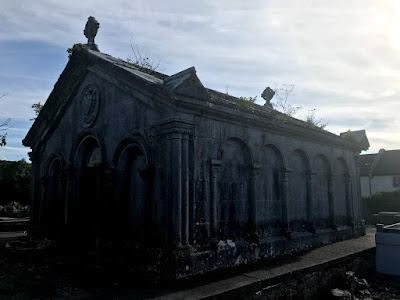 The most impressive and prominent mausoleum in the churchyard is the Vandeluer Vault, erected by Colonel Crofton Moore Vandeleur of Kilrush House in 1873. It is designed to look like a miniature chapel, with blind arcades in the north and south sides, the entrance on the east side, facing the ruins of the early church, and panels on the east and west ends.

The Vandeleur coat-of-arms is above the entrance door on the east side of the Vandeleur Mausoleum, with the motto: Virtus Astra Petit (‘Virtue seeks the stars’). 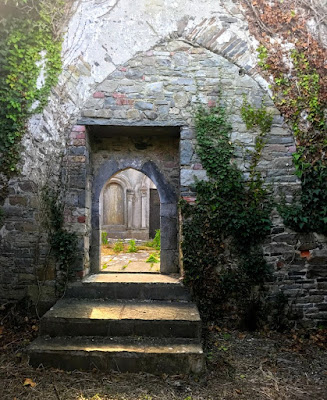 The Vandeluer Vault seen through a door in the original chancel arch of the earlier church (Photograph: Patrick Comerford, 2018)

The plaque over the main entrance to the vault reads:

‘Blessed are the dead that die in the Lord.

The plaque to the left of the main entrance to the vault reads:

‘Sacred to the memory of Crofton Moore Vandeleur of Kilrush who died 8th Nov 1881 eldest son of the Right Hon John Ormsby and Lady Frances Vandeleur. He passes away from this life to join his beloved wife immeasurably regretted by his sorrowing family relations and friends. His existence was spent in endeavouring to do good amongst all around him for many years he represented the County of Clare in the Imperial Parliament. Also to the memory of Crofton Toler Vandeleur late Captain of Hussars and 7th Dragoons Guards son of Colonel Crofton Moore and Lady Grace Vandeleur, who died and is interred in Brussels, May 1884 aged 44 years. Deeply lamented by his beloved wife and children and relations.

The plaque to the right of the main entrance reads:

‘Sacred to the memory of Grace second daughter of Hector second Earl of Norbury the affectionate and lamented wife of Crofton Moore Vandeleur who departed this life trusting in the Lord June 2nd AD 1872 aged 59. This mausoleum was erected by her husband for the Vandeleur family as a tribute of love and honour to one who for forty years proved herself a devoted wife mother and friend and by her kindness of heart many virtues and talents endeared herself to all. Also to the memory of their dear children John Toler Vandeleur a twin interred at St Mary's Church Dublin, born Jan 1836 died Feb 1837. Henry Rebow Vandeleur, interred at Kilrush, born Dec 1848 died Feb 1849. Frances Letitia Vandeleur, interred at Buxton, born March 1834 died Oct 1870.

‘For as in Adam all die even so in Christ shall all be made alive.1 Corinthians xv’.

The plaque on the west side, to the left at the rear of mausoleum reads:

The plaque on the west side, in the middle section at the rear of the mausoleum reads:

‘This mausoleum is erected on the site of the old church of St Senan in which here interred the Rev John Vandeleur son of Giles Vandeleur of Ralahine, Co Clare appointed to the prebend of Inis-Catherie and Union of Kilrush 1687, died 1727.

‘and the Right Hon Thomas Burton Vandeleur second son of Crofton and Alice Vandeleur, one of the Judges of the Kings Benches in Ireland, died Sept 1835.

Sadly, hundreds of the surrounding graves at the back of the church are unkempt, a number of vaults are open and can be accessed, the graveyard is overgrown and the grass is not cut regularly.

Dear Patrick, the churchyard has been restored by the voluntary work of members of Kilrush and District Historical Society (KDHS). This ongoing project which began in 2012, has been made possible by considerable local fundraising and successful grant applications. The fruits of our labour are neatly reflected in your article. The reference to the committee mentioned in the Clare Champion predates our group. KDHS has also mapped, surveyed and documented the entire site. Our project for 2019-2021 is to repair the boundary wall. In 2019, the Vandeleur Mausoleum was completely restored owing to a grant from the Heritage Council of Ireland, which was secured by members of KDHS.

We are glad that you enjoyed your visit to the churchyard.
Best wishes,
Dr Paul O'Brien, Secretary, KDHS.