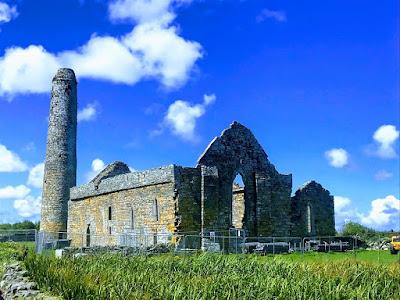 The Cathedral ruins and round tower on Scattery island (Photograph: Patrick Comerford, 2018)

Late last week, I joined a tour group of about 30 people who took a boat from Kilrush Marina in Co Clare, with Scattery Island Tours to visit Scattery Island, with its ruined cathedral, churches, round tower and monastic sites.

Scattery Island is a once-inhabited but now deserted island in the Shannon estuary, about a mile south-west of Kilrush. The island and its tall round tower are clearly visible from the coast, and the longest part of this short boat trip was passing through the lock that allows boats to pass from Kilrush Marina into the Shannon Estuary.

Apart from the monastic site, and Inis Cathaigh or Scattery Island is also home to a lighthouse, the remains of an artillery battery, a visitor centre, a ruined castle and the scattered remains of the homes of families who had lived on the island until the 1970s. Most of the island is now owned by the Office of Public Works.

The Irish name Inis Cathaigh later became Iniscathy, Iniscattery and finally Scattery, and means Island of the Battles, or, in legend, the island of the sea monster vanquished by Saint Senan.

The island is closely inked in history and in myth with the story of Saint Senan, who was born at Magh Lacha, east of Kilrush, ca 488. Legend says his birth was foretold by Saint Patrick on a visit to the area. As a boy, Senan was placed under the guidance of an abbot named Cassidan, and finished his studies with Saint Naul at Kilmanagh, Co Kilkenny.

Saint Senan began his mission work by founding a church near Enniscorthy, Co Wexford, ca 510-512. The parish is still known as Templeshannon (Teampail Seanain, or the Church of Senan). He then founded churches at Sennen’s Cove, Cornwall, and at Plouzane (‘Church of Senan’) in Brittany. He is also said to have visited Menevia, Rome, and Tours, before returning to Ireland around 520.

Legend says that Saint Cannera she asked to be buried near Saint Senan. When she died, her brother waited until low tide to bury her in the inter-tidal zone, which was not officially part of the island, thus fulfilling his sister’s wish without breaking his own rules.

According to local legend, Saint Senán had to defeat ‘The Cathach,’ a sea monster that inhabited the island and killed anyone who stepped ashore. The Angel Raphael led him to Ard na nAingeal, where he faced the monster.

Inis Cathaigh became an abbey and the seat of a bishop, with Saint Senan counted as its first bishop from ca 535-540. He is listed among the ’12 Apostles of Ireland’ and died on 8 March 544, when he was buried in the abbey church.

The Vikings first raided the island in 815, killing many monks. The monastery was plundered repeatedly until the Vikings came to settle there in the mid-10th century. This, in turn, led to attacks by Irish kings.

Scattery was a part of the Norse Kingdom of Limerick, and with its strategic location at the mouth of the Shannon Estuary it effectively controlled all maritime traffic passing up the Shannon to Limerick. 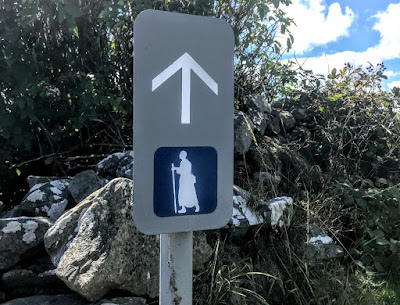 At an early period, the abbot-bishop of the monastery tried to exercise authority over what later became parts of the dioceses of Killaloe, Limerick and Ardfert. The Diocese of Inis Cathaigh was recognised at the Synod of Ráth BreasailI in 1111, and included the present Baronies of Moyarta and Clonderalaw in Co Clare, the Barony of Connelo in Limerick as well as a small portion of Kerry from the Feal to the Atlantic.

An Irish Franciscan friary, Thomas McMahon, was appointed Bishop of Scattery by Pope Innocent VI in 1360, and tried to take possession of the island and the diocese. But the bishops of Limerick, Killaloe and Ardfert complained to Rome, and in 1366 Pope Urban V declared the appointment null and void. In 1378, its possessions were divided, and the island remained a portion of the Diocese of Killaloe, being subsequently merged into the parish of Kilrush.

There was a series of titular Bishops of Scattery in the 14th and 15th centuries, but they were absentees and generally served as assistant bishops in York and Canterbury until 1467. They included an English Augustinian, John Grene, who was Bishop of Inis Cathaig in 1452-1467 but lived in England.

In the reign of Queen Elizabeth I, the abbey with the churchyard, 24 acres of land, a house, a castle, and three cottages in the island of Inniscattery were granted to the Mayor and citizens of Limerick, together with a church in ruins, 20 acres of wood and stony ground, and all the tithes. 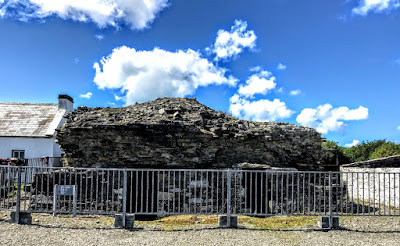 The ruins of the Keane Castle on Scattery island (Photograph: Patrick Comerford, 2018)

The Keane family built a stone castle on the island in the 1577, a decade before the Spanish Armada in 1588. It was several storeys high in 1681, but today only the vaulted chamber at ground level is all that can be seen of the castle near the pier.

The artillery battery, located on the south of Scattery, was built during the Napoleonic Wars and is well preserved. The Shannon Estuary was one of three invasion places the French had considered along the west coast of Ireland, and Scattery Island is one of six batteries built in the estuary.

After the Windsor Castle was salvaged in 1842, Scattery Island was home to Shannon Estuary river pilots and their families. The main families of the island were the Brennan, Griffin, Hehir, McMahon, Melican, Moran and Scanlan families.

The lighthouse on the island was built in 1872. Today, it is fully automated and powered by solar power. 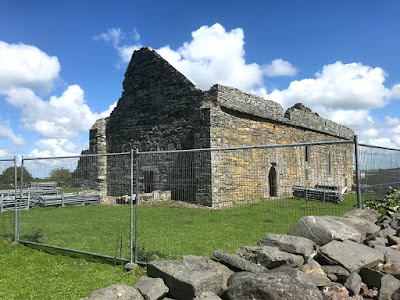 The west end of the Cathedral on Scattery island (Photograph: Patrick Comerford, 2018)

Scattery Island has the ruins of six churches and one of the highest Round Towers in Ireland.

The main church on the island is Saint Mary’s Cathedral, probably built in the 8th century, and repeatedly altered and enlarged until the 15th century. It is 20.7 metres long and 8.2 metres wide. The north wall, the lower part of the west gable and parts of the south wall possibly date from the 8th or 9th century.

The east gable was rebuilt at a later date and a large gothic window was inserted. Gothic windows and a pointed doorway were also inserted into the south wall during that later period and the doorway in the west gable was blocked up.

An effigy of a bishop’s head on the outside of the east window is said to be Saint Senan. Below this are two carved heads of snarling animals, said to represent the monster Saint Senan banished from the island. 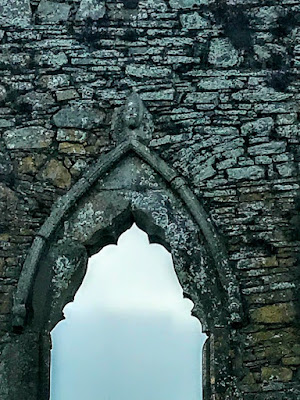 The figure of a mitred bishop above the east window of the Cathedral on Scattery island (Photograph: Patrick Comerford, 2018)

To the north the cathedral, a smaller church or ‘oratory’ was probably a private chapel used by the monks and priests of the island community. Excavations of the site revealed the base of a rich Romanesque chancel arch dating from ca 1100, with clustered pillars and chevrons. 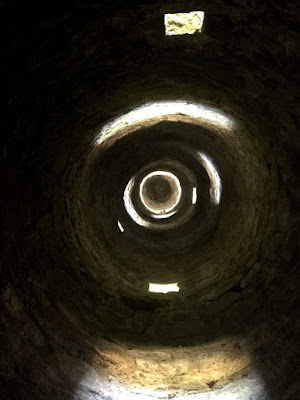 Inside the Round Tower, one of the tallest in Ireland (Photograph: Patrick Comerford, 2018)

To the immediate west of the cathedral, the Round Tower is 26 metres (85.3 ft) high. It is one of the oldest and tallest surviving round towers in Ireland, and one of only two to have its door at ground level – a feature shared with the round tower in Castledermot, Co Kildare; most round towers have doorways raised 1.5 to 4.5 metres above the ground. 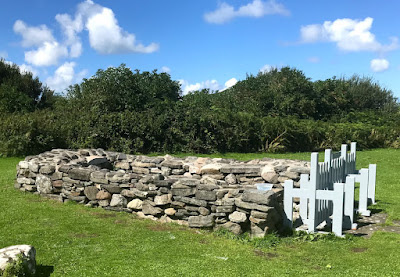 Saint Senan’s Well to the south of the round tower (Photograph: Patrick Comerford, 2018)

Saint Senan’s Well or Tobar Senan, to the south of the round tower, is a sunken well entered by steps and still filled with water. It remains a place of pilgrimage associated with a ‘pattern’ on Saint Senan’s Feast Day, 8 March. Legend says that during a drought Saint Senan prayed for water and an angel appeared, guiding him to this place. When he plunged his staff into the ground, water sprung forth. 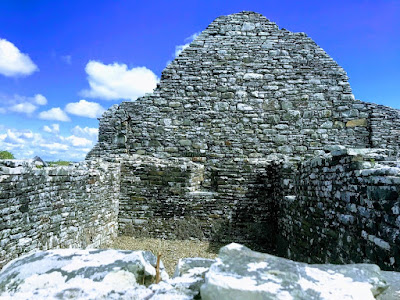 To the north of the cathedral site, Saint Senan’s Church is a small 12th century church built in the Romanesque style.

Immediately west of this church, ‘Saint Senan’s Bed’ is a small church built over the burial place of Saint Senan. An iron bar blocking the doorway was traditionally used to block women from entering this small church. 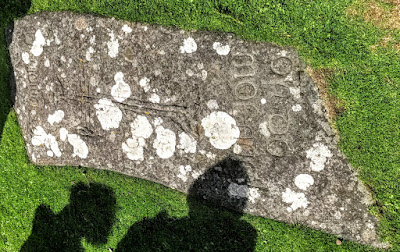 Close to Saint Senan’s Church and Saint Senan’s Bed, a mediaeval grave slab is carved with an ornate cross and inscription in mediaeval Irish that reads, Or do Moenach aite Mogroin, ‘Pray for Moenach, the teacher of Mogroin.’ This is probably the burial ground reserved for the island’s monks, priests and bishops. 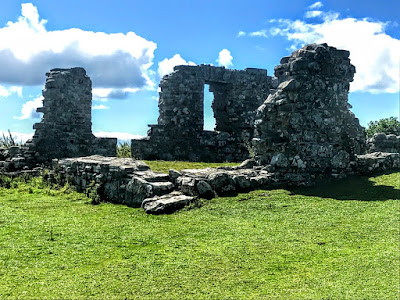 The church ruins on the Hill of the Angel (Photograph: Patrick Comerford, 2018)

The highest point on the island is the Hill of the Angel or Cnoc an Aingeal, a ridge to the south-west of the cathedral. The ruins here are from a church built to commemorate Saint Senan’s battle with the island monster. It is said this is where Saint Senan first set foot on the island, having been flown there by an angel to confront the monster.

This is thought to be one of the earliest surviving churches from Saint Senan’s monastery, but only a few sections of the foundations and the south wall of the church remain, including a window and two doorways. 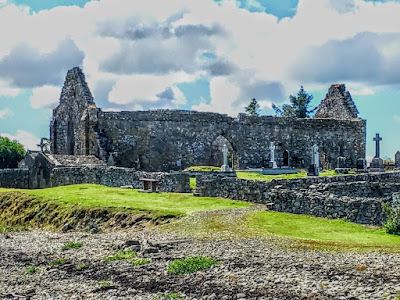 The Church of the Dead is the most recent church on the island (Photograph: Patrick Comerford, 2018)

The most recent church on the island is the Church of the Dead or Teampall na Marbh, which probably dates from the late 14th or early 15th century. Inside the church, there is a mediaeval carving of a man’s face to the right of the east window. 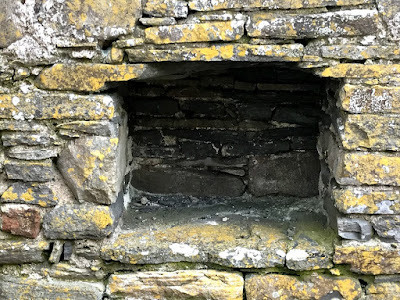 A Piscina in the Church of the Dead (Photograph: Patrick Comerford, 2018)

The graveyard at this church was the traditional burial place for the lay inhabitants of the island. The last burial here took place in 2007.

On the shore, close to the Visitor Centre, a ‘Prayer Stone’ was placed here in the 19th century as marker to guide pilgrims visiting the island. At one time, there were seven of this prayer stones on Scattery. 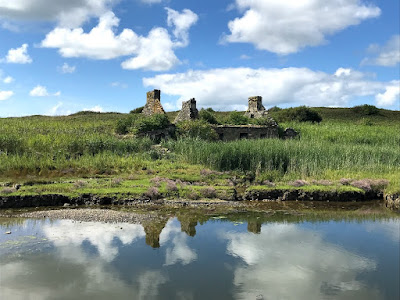 The population of Scattery Island peaked at 141 in 1881, and the population continued to thrive into the 20th century, with a post office opening in the 1930s. The school closed in 1948, and the last two islanders, brother and sister Bobby and Patricia McMahon, left Scattery in 1978, and by 1989 most of the island had been bought on behalf of the Irish State.

Inis Cathaigh remains the name of a titular see in the Roman Catholic Church, and today the titular Bishop of Inis Cathaigh is Bishop Josef Graf, who was appointed in 2015 as an auxiliary bishop of Regensburg in Germany. In the Church of Ireland, Inniscattery remains the name of a prebendal stall in the United Chapter of the Cathedrals of Limerick, Killaloe and Clonfert. Since 2016, the Prebendary of Inniscattery is Canon Ruth Gill, of Shinrone Parish in the Diocese of Killaloe.

At the pier on Scattery Island … with views of the Church of the Dead, the Round Tower and the Cathedral (Photograph: Patrick Comerford, 2018; click on image for full-screen view)