‘Where you go, I will go … your
people shall be my people,
and your God my God.
Where you die, I will die’ 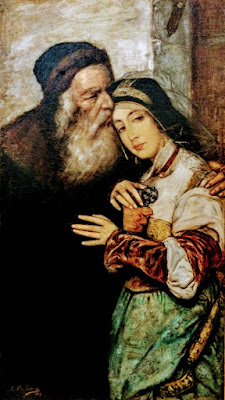 ‘Shylock and Jessica’ by Maurycy Gottlieb … a copy in the Jewish Museum in the Old Synagogue in Kraków (Photograph: Patrick Comerford)

I have been working all day on sermon notes and liturgical resources for the first two Sundays in November, which include two successive readings that summarise the story of Ruth.

Because the first of these Sundays may be celebrated in many parishes as ‘All Saints’ Sunday’ (4 November 2018) and the second marked as Remembrance Sunday (11 November 2018), many people in parishes may not hear the story of Ruth.

Ruth is the story of three widows who are powerless and destitute in a male-dominated society, and the first reading includes Ruth’s memorable song or poetic passage addressed to Naomi:

Ruth abandons her home and her traditional religion, marries Boaz and becomes a Jew by choice. Ruth and Boaz are the parents of Obed, who is the father of Jesse, and Jesse is the father of David, Israel’s greatest king. She is one of only five women mentioned in the genealogy of Jesus, along with Tamar, Rahab, Bathsheba and Mary (see Matthew 1:1-16).

Ruth’s story is an important illustration of interfaith marriage and challenges the tradition that Jewish identity is conveyed only through matrilineal descent.

In my search for images to illustrate the story of Ruth, I came across a copy of the painting Shylock and Jessica, by Maurycy Gottlieb, which I photographed in the Jewish Museum in the Old Synagogue in Kraków almost two years ago.

Maurycy Gottlieb (1856-1879) was a Polish Jewish realist painter of the Romantic period who was, perhaps, the most famous Jewish painter of his age. He was born in Drohobych to a wealthy, Yiddish and Polish-speaking orthodox Jewish family. Drohobych in Galicia was then part of the Austrian sector of partitioned Poland, but is now in western Ukraine.

Maurycy (Moses) Gottlieb was one of the 11 children of Isaac Gottlieb and his wife Fanya (née Tigerman). At the age of 15, he enrolled in the Vienna Fine Arts Academy, and in 1873 he went to Kraków to study under Jan Matejko. There he became a close friend of Jacek Malczewski.

However, an anti-semitic incident at the School of Fine Arts prompted Gottlieb to leave Kraków after less than a year, in spite of Malczewski’s protests. He visited Norway and Vienna, and then moved to Munich in 1875 to study.

In 1876, he won the Gold Medal at the Munich Academy for this painting, Shylock and Jessica, a painting inspired by a scene in Shakespeare’s The Merchant of Venice. This too is a story of heartbreak and conversion, and some ways is a reversion of the story of Ruth.

Jessica is Shylock’s only daughter, and she breaks her father’s heart by running away with her father’s savings to marry Lorenzo, a Christian. After eloping with Lorenzo, she trades her dead mother’s turquoise ring for a monkey. Her thoughtlessness devastates her father:

Jessica converts to Christianity in act of abandonment that brings to end the line of Jewish descent in Shylock’s family. When Lancelot the clown says Jessica is ‘damned’ because she is the ‘Jew's daughter,’ Jessica declares ‘I shall be saved by my husband. He hath made me a Christian’ (3.5.18-19).

Jessica sees her marriage to Lorenzo as a way to escape being her father's daughter:

Alack, what heinous sin is it in me
To be ashamed to be my father's child?
But though I am a daughter to his blood,
I am not to his manners. O Lorenzo,
If thou keep promise, I shall end this strife,
Become a Christian and thy loving wife. (2.3.16-21)

Gottlieb based Jessica’s face on Laura Rosenfeld (1857-1944), to whom he had proposed marriage. When the painting was exhibited in Lviv (1877) and Warsaw (1878), it received wide acclaim.

Laura was also one of 11 children, the daughter of Joseph Rosenfeld and his wife Rosa (née Kolisch) of Brno. Laura was sent to convent schools in Lienz and Geneva, but continued to adhere to the Jewish faith instilled in her by her mother. When her father died, her widowed mother moved with her to Vienna, where she first met Maurycy, in 1875 or 1876.

Maurycy was smitten by Laura, and he soon proposed to her. They became engaged and she became the subject of many of his paintings, including Portrait of Laura, Jews Praying in the Synagogue on Yom Kippur, Shylock and Jessica, Uriel Acosta and Judith.

Meanwhile, in those two years while he was living in Vienna, he worked on paintings with biblical themes and produced book illustrations.

After visiting Rome in 1878, Gottlieb returned to Kraków, where he worked on a new project, a series of monumental paintings including scenes from the history of the Jews in Poland. As he continued to travel, Laura began to lose interest in him. He sensed her distance in their letters and became more and more anxious, until Laura finally confessed she had fallen in love with someone else.

Gottlieb died on 17 July 1879, according to some, of a broken heart, intentionally letting his health fail, due to his despair over this failed romance and Laura’s new-found love. He expressed his heartbroken feelings of despair in his letters to Laura and in his painting Jews Praying in the Synagogue on Yom Kippur, where he has placed his own name on the memorial inscription on the Torah mantle.

Laura believed she was the cause of this death, later writing that she only consented to marry the Berlin banker Leo Henschel, because he threatened to shoot himself if she did not. ‘I said yes because I could not forget the suicide of the young painter Gottlieb, two years before.’

Despite his premature death at the age of 23, more than 300 of his works survive although not all are finished.

But what happened to Laura Rosenfeld?

While Laura ran a busy family home in Berlin household, she continued to read and study. After her husband died in 1909 and her children had left home, Laura dedicated her life to education and social work. She worked in an orphanage for children of criminals, as a social worker, and set up a communal home near Berlin that stressed harmony and equality among the residents. She was also active in feminist and human rights movements.

With the rise of the Nazis, she fled to the Netherlands in 1933, and there she lived in The Hague. For a time, she was hidden by a friend in the east Netherlands until she was betrayed. She was 86, paralysed and almost blind, when she was sent to Westerbork, a transit camp in the Netherlands, and from there to Auschwitz-Birkenau. The last known record of her is on 4 April 1944. Her family genealogical accounts say she was murdered in Auschwitz on 8 April 1944.

Her eldest daughter, the sculptor Margarete Steiner-Henschel, was murdered in Auschwitz on 31 August 1944. Laura and her daughter Margarete are commemorated on a memorial monument in Zeist in the east Netherlands. 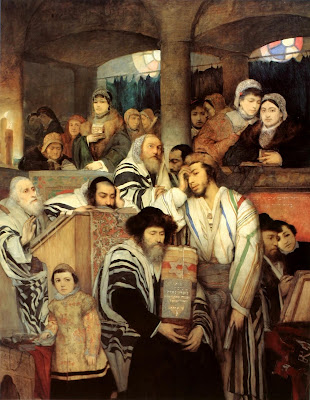