An afternoon of island-hopping
on the Lagoon islands of Venice

Sephardim against Ashkenazim … a chess set in Murano glass seen in a shopfront in Murano (Photograph: Patrick Comerford, 2018)

One afternoon last week, two of us caught a vaporetto from the San Zaccaria waterbus station in front of the Doge’s Palace on the waterfront beside Saint Mark’s Square in Venice, and headed off to visit some of the tiny islands out in the lagoon, including San Michele, Murano, Mazzorbo, Burano and Torcello.

The lagoon was once the preserve of fishermen and hunters, and the stories of the islands are shrouded in myth and legend. Murano is the island of glassmakers and Burano the island of lace, but other islands were monasteries, used as prisons and gunpowder factories, or served as market gardens or cemeteries.

Appropriately, it was an afternoon shrouded in fog and mist, and the first stop was at Cimitero on the island of San Michele, across the water from Fondamente Nuove.

The island, with a large number of cypress trees and enclosed within high terracotta walls, was originally the two islets of San Michele and San Cristoforo della Pace.

Hermits of the Camaldolese Order moved onto the island in the 12th century, and founded the Monastery of Saint Michael (S. Michele di Murano), which became a centre of learning and printing. The famous cartographer, Fra Mauro, who drew maps that helped European explorers, was a monk of this community. 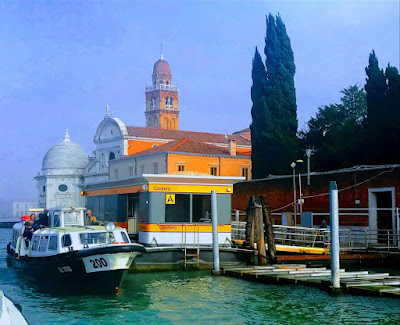 The Church of San Michele in Isola, designed by Mauro Codussi in 1469, is the first Renaissance church in Venice (Photograph: Patrick Comerford, 2018) 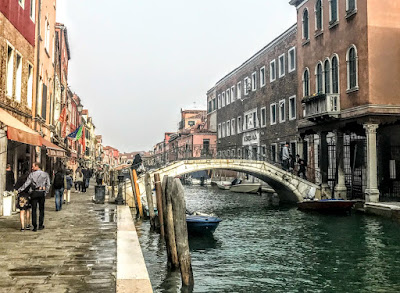 Murano is not one island, but a cluster of seven small islands linked by bridges over eight channels (Photograph: Patrick Comerford, 2018)

From San Michele, we continued on to Murano, which is synonymous with Venetian glass. Murano is about 1.5 km north of Venice and measures about 1.5 km across with a population of about 5,000. It is not one island, but a cluster of seven small islands linked by bridges over eight channels.

Murano was first settled by the Romans, and in the sixth century people moved here from Altinum and Oderzo. At first, the island prospered through fishing and the production of salt. It was also a centre for trade through the port it controlled on Sant’Erasmo.

Murano began to decline from the 11th century as the islanders began to move in large numbers to Dorsoduro.

Murano’s reputation as a centre for glassmaking was born when the Venetian Republic, fearing fire and the destruction of the city’s mostly wooden buildings, ordered all the glassmakers to move their foundries to Murano in 1291.

Exports began in the 14th century, and Murano became famous, initially for glass beads and mirrors. The glassmakers became the most prominent citizens of Murano. By the 14th century, they were allowed to wear swords, enjoyed immunity from prosecution by the Venetian state and found their families intermarried with Venice’s most affluent families.

Nevertheless, so many glassmakers took the risk of migration and established glass furnaces as far away as England and the Netherlands, Venice had partially lost its monopoly by the end of the 16th century. 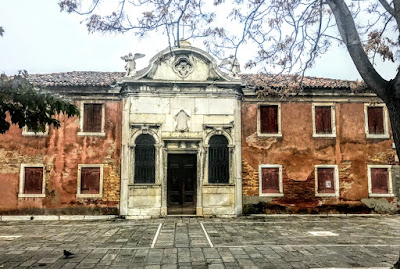 The Oratorio ex Ospizio Briati is the chapel of a former Carmelite convent on Murano (Photograph: Patrick Comerford, 2018) 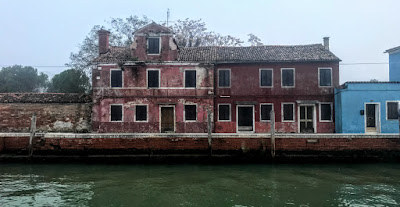 The journey in the Lagoon continued along the canals of Mazzarbo (Photograph: Patrick Comerford, 2018)

From the pier at the Faro lighthouse in Murano, we caught another vaporetto, continuing our journey in the Lagoon through the canals of Mazzarbo, an island of orchards and gardens, and on to the island of Burano. 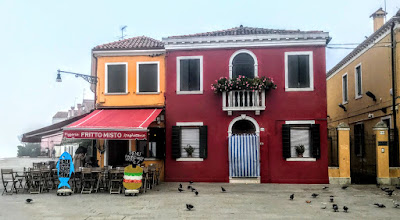 Burano is one of the most colourful islands in the lagoon (Photograph: Patrick Comerford, 2018)

Burano is one of the most colourful islands in the lagoon, known for its small, brightly painted houses. The colours follow a specific system, and householders need permission for the colours they use in painting their houses.

Burano too is a collection of five smaller islands, linked by canals and bridges, and with a population of about 2,800. Because of its size, Burano is densely populated, covered almost entirely covered with residential buildings but with a few small green areas.

Burano was probably first settled by the Romans. In the 6th century, the island was settled by people from Altino. Two stories are told to explain the name of Burano. One says it was founded by the Buriana family, and another that the first settlers came from the small island of Buranello.

Although Burano became a thriving settlement, it gained none of the privileges of neighbouring Murano or Torcello. It gained importance only when the women on the island began making lace with needles, a skill introduced from Venetian-ruled Cyprus. When Leonardo da Vinci visited Burano in 1481, he bought a cloth for the main altar of the Duomo or cathedral in Milano.

Lace from Burano was exported throughout Europe, but this trade began to decline in the 18th century and the industry did not revive until 1872, when a school of lacemaking was opened.

The Church of San Martino is known for its leaning campanile, and also has a painting by Giambattista Tiepolo (‘The Crucifixion,’ 1727).

Many of the men of Burano work as fishermen or on the water. One of the first things visitors to Burano see is ‘Souaci Gesú,’ a sculpture by Remigio Barbera, an artist from Burano. This sculpture, in a park near the vaporetto stop and facing the waterfront, shows a grieving young woman expressing her pain and despair at the death of her husband at sea.

We waited here in silence before catching another vaporetto that would bring us to the neighbouring island of Torcello. 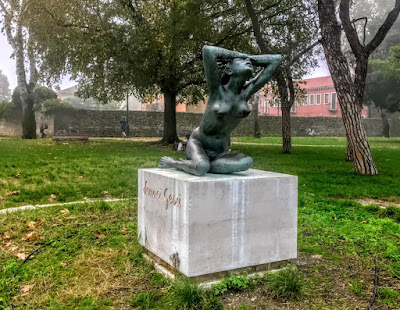 ‘Souaci Gesú,’ a sculpture by Remigio Barbera, is one of the first things visitors see in Burano (Photograph: Patrick Comerford, 2018)