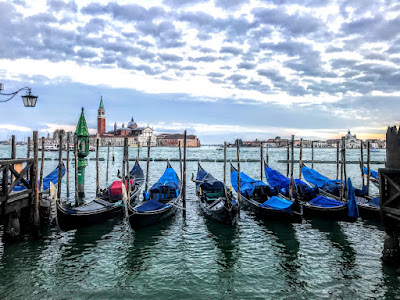 Simeon Luzzatto argued it was acceptable to travel by gondola on Shabbat (Photograph: Patrick Comerford, 2018)

Simeon (Simcha) Luzzatto (שמחה לוצאטו‎) was a prominent rabbi in the ghetto in Venice, where he shared the rabbinate with Leon de Modena, and their work prefigured the Enlightenment in Europe.

The Luzzatto family of Italian scholars can be traced to the late 15th century or earlier. According to family tradition, the family is descended from a German Jew from the province of Lausitz who migrated to Italy, where he was named after his native place (Lausatia, Lausiatus, Luzzatto). The German rite is said to have been observed in the family synagogue in Venice, the Scuola Luzzatto.

The earliest recorded member of the family is Abraham Luzzatto, who lived at Safed in the late 15th and early 16th century.

His great-great-grandson, Simeon Luzzatto, was born in Venice ca 1580-1583. He was educated by some of the outstanding rabbis of the day, as well as receiving a secular and classical education.

By the age of 20 or 22, many of his works were being published and discussed throughout the Jewish community, and was still a young man when he acquired renown as a rabbi and scholar.

He is styled rabbi at the head of a long responsum, Mish’an Mayim (1606), which he wrote in response to the miḳweh of Rovigo. This responsum shows him to have been an authority in rabbinics and is quoted by many rabbinical authorities.

He shared the rabbinate of Venice with Leon of Modena, who held him in great esteem, and together they wrote a work on the Karaites.

His Discorso circa il stato degli Hebrei et in particolar dimoranti nell’inclita città di Venetia (‘Discourse Concerning the Condition of the Jews, and in particular those living in the Fair City of Venice’), published in 1638, was written in Italian and addressed to the Doge and the leaders of the Venetian Republic.

His Discorso is a treatise on the position of the Jews, particularly those in Venice. It is an apology for the Jews in 18 arguments, each forming a chapter.

For instance, one chapter defends the Jews of Venice and their usefulness in commerce. Another explains the causes of decreases in certain state revenues and shows that encouraging the activities of the Jews would tend to increase those revenues. He points out that the Jews are especially fitted for commerce, that they loyally observe the laws of the state, and that the Venetian Republic reaped great advantages from its relations with them.

The chief merit of this book is its impartiality, for while Luzzatto depicts the better characteristics of the Jews he does not ignore their faults. He shows remarkable knowledge of the commerce of his time and of the political influences that affected it.

According to Luzzatto, the common people felt little antipathy toward the Jews, and depended on them to some extent for their living. He argued that the fanatical religious zealots were found among the patricians who, out of envy, advocated restrictions and even banishment.

The last three chapters include an examination of Hebrew literature and of the various classes of Jewish scholars, an account of the directions in which the Jews were permitted freedom, and of their sufferings, and a survey of the Jews in non-Italian countries.

This discourse was successful in convincing the Doge to rule against an edict to expel the Jewish population from Venice.

Another important work in Italian, Socrates, written in his youth, argues that human reason cannot attain its goals if unaided by divine revelation. This is written in the form of a Platonic dialogue and seeks to prove how useless human reason is without revelation.

In his Socrates, Luzzatto tries to prove the impotence of human reason when unaided by divine revelation. It is in the form of a parable, in which he puts his thoughts into the mouth of Socrates.

Reason, being imprisoned by Orthodox authority, appealed for liberation to the Academy of Delphi, which had been founded to rectify the errors of the human intellect. The academy granted her petition notwithstanding the remonstrance of Pythagoras and Aristotle, who argued that Reason, when free, would spread abroad most frightful errors. Liberated Reason caused great mischief, and the academicians did not know what to do, when Socrates advised combining Reason with Revelation.

Luzzatto dedicated this book to the Doge and Senate of Venice, and stated his ancestors had settled in Venice two centuries earlier. In this book, he also quotes an earlier work he had published, Trattato dell’ Opinioni e Dogmi degl’ Hebrei e dei Riti Loro Piu Principali.

From 1648, he headed the Venetian rabbinate of Venice.

Luzzatto was well acquainted with ancient literature and philosophy and with contemporary literature, and he is praised by Joseph Delmedigo as a distinguished mathematician.

Luzzatto was a thinker and a believer as well. He did not share Manasseh bin Israel’s dream that the lost 10 tribes still exist together in some part of the world.

Jacob Aboab asserts that he saw in Venice a collection of Luzzatto’s sermons, speeches and responsa, which included one that argued it was acceptable to travel by gondola on Shabbat. 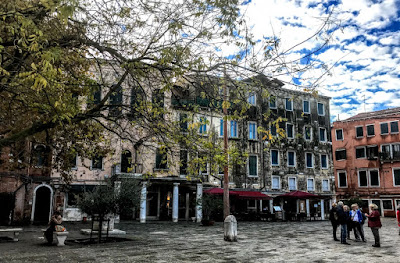 Synagogues surround the main square in the Ghetto in Venice … from 1648, Simeon Luzzatto headed the rabbinate of Venice (Photograph: Patrick Comerford, 2018)