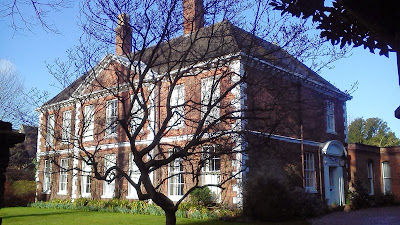 The Deanery in the Cathedral Close in Lichfield … George Boleyn was Dean of Lichfield in 1576-1603 (Photograph: Patrick Comerford)

Tudor dynastic disputes, secret romances in royal households, hidden heirs and the claims of alleged illegitimate children to family titles and estates are all ingredients for blockbuster romances and television series that become box sets.

These stories include tales of high treason, hurried executions and accusations of inappropriate liaisons. Add in the secret life of Anne Boleyn, plots to dethrone Elizabeth I, stories of young children secretly sent across the sea to secure their safety in Ireland, and we have the storyline for a Tudor drama that is likely to be + 90 per cent fiction and – 10 per cent history.

It becomes farcical when I hear about a barking dog who interrupts a dean’s sermons in Lichfield Cathedral – yet that episode, however comical, is one of the truest elements in a series that mixes farce, fiction and history.

But in some idle moments over Christmas and New Year, I came across an additional ingredient seldom found in popular paperback romances: George Boleyn, who was the Dean of Lichfield from 1576 until he died 1603.

Was this colourful character at the court of Queen Elizabeth really her first cousin? Was he the illegitimate son – or even the legitimate son – of Anne Boleyn’s brother, the tragic George Boleyn, who was executed on accusations of high treason and claims of incest with his sister?

However, another theory states that he could not have been the legitimate son of Henry VIII’s brother-in-law, although there was no record of children. Other sources say it is more likely that he was a distant cousin and relative of Queen Anne Boleyn.

The dean is sometimes said to have been the son of Jane Boleyn, née Parker, who died in 1542, and George Boleyn, Earl of Wiltshire. This would introduce the first Irish connection through his supposed grandfather, Thomas Boleyn (1477-1539), and his wife, Lady Margaret Butler (1465-1540), a daughter of Thomas Butler (1426-1515), 7th Earl of Ormond.

Despite these persistent claims, we cannot be sure of the parentage of George Boleyn, who became Dean of Lichfield, and we know very little about his childhood and early life, not even his date or place of birth. 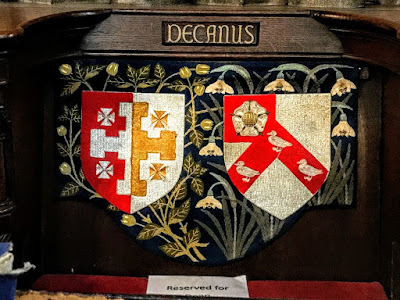 George entered Cambridge as a sizar, or a poor student who paid his way undertaking menial tasks. In other words, he did not come from a privileged family or comfortable circumstances.

Although Cambridge records suggest he was ‘perhaps’ a son of George Boleyn, Lord Rochford, this suggestion relies on secondary sources, including the Dictionary of National Biography, which says he ‘was not improbably the son of George Boleyn, Viscount Rochford …, who is usually reported to have left no male issue.’ But we have no primary sources for these claims.

At Cambridge, Boleyn was a pupil of John Whitgift, then Lady Margaret’s Professor of Divinity and later Archbishop of Canterbury (1583-1604). He graduated BA (1553) and proceeded MA (1559). 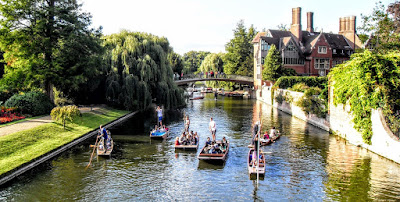 The Jerwood Library at Trinity Hall overlooking the Backs and the River Cam in Cambridge (Photograph: Patrick Comerford)

He was ordained deacon by Edmund Grindal, Bishop of London, on 21 March 1563, and priest on 11 December 1566. But by then he was holding church offices, and was Prebendary of Ulleskelf in York Minster from 3 August 1560, a post he held until he died.

On 21 December 1566, ten days after being ordained priest by Grindal, Boleyn was made a canon of Canterbury Cathedral, and in the following year he received the degree BD in Cambridge. He returned to Cambridge as the University Preacher 1572.

Serious charges were laid against Boleyn in Canterbury in September 1573, alleging he had threatened the dean, Thomas Godwin (later Bishop of Bath and Wells), that he would nail him to the wall, had struck one of the canons, William Eling, with a blow on the ear, had attempted to strike another canon, Dr Rush, had struck a third canon in the chapter house, and had thrashed a lawyer. Obviously, Boleyn had a fiery temper, and he admitted he habitually swore when he was provoked. 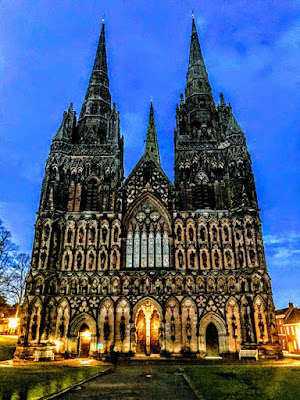 Boleyn received the degree DD through Trinity College Cambridge in 1576, and later that year he was installed as Dean of Lichfield on 22 December 1576.

Boleyn became involved in a lengthy and serious dispute with John Aylmer, Bishop of London, in 1582. It is recorded that the bishop, ‘being necessitous on his coming into the diocese, laboured all he could to supply himself from his clergy.’ But Boleyn, a man ‘prudent and stout,’ strenuously resisted the bishop’s planned visit. When he appealed the privy council, the Archbishop of Canterbury was appointed to institute a visitation.

Dean Boleyn had a dog named Spring, and on one occasion, when he was in the pulpit, ‘hearing his dogg cry, he out with this text: whie how now hoe, can you not lett the dogg alone there? come Springe, come Spring.’ At another time, as he was delivering a sermon, ‘taking himself with a fault he said there I lyed, there I lyed.’ 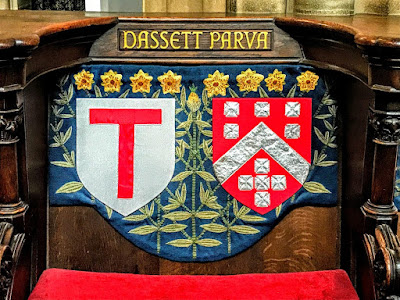 The stall of the Prebendary of Dassett Parva in Lichfield Cathedral (Photograph: Patrick Comerford, 2018)

Boleyn resigned the rectory of Saint Dionis, Backchurch, in London, in August 1591, and in 1595, after much opposition, he was appointed Rector of Bangor-on-Dee, or Bangor Monachorum with Overton, near Wrexham in North Wales.

Willis’s Survey of Cathedrals’ says ‘Dean Boleyn was kinsman to Queen Elizabeth, who would have made him Bishop of Worcester, but he refused it.’ In his will he writes: ‘Her majestie gave me all that ever I have and subjectes gave me nothing.’

Boleyn died on 25 January 1603, and was buried in front of the choir in Lichfield Cathedral. 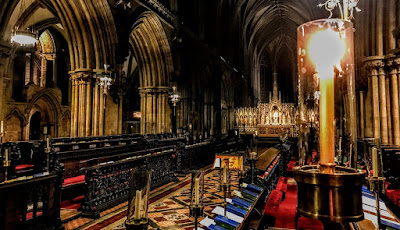 The choir in Lichfield Cathedral ... Dean George Boleyn was buried in front of the choir after his death in 1603 (Photograph: Patrick Comerford, 2018)

In his will, Boleyn says he is a kinsman of Lord Hunsdon, who was the grandson of Mary, eldest daughter of Sir Thomas Boleyn, father of the ill-fated Viscount Rochford.

There are continuing debates on online forums about the dean’s parentage, with many suggestions that he was a son of George Boleyn, Viscount Rochford, and his wife and Jane, although there is no record that they ever had any children.

Many of these debates also discuss his father’s sexuality, with contradictory claims that he was gay, that he was ‘a womaniser,’ and that he was a wife-hater, as well as the old allegations at his trial that he had incestuous affair with his sister, Anne Boleyn, second wife of Henry VIII and mother of Queen Elizabeth.

If there had been a legitimate son, he would have been a claimant to the title of Earl of Ormond and Earl of Wiltshire, which Henry VIII had forcibly removed from the Ormond Butlers and the Stafford family and bestowed on the Boleyn family. But there is no record that the Dean of Lichfield ever considered making a claim to these titles.

The debate has been fraught, with unsigned comments by people who claim they are reputable authors, biographers and historians; claims and counterclaims have been removed and restored on pages on Wikipedia.

Many of the suggestions have been speculative. Some contributors concede that George Boleyn of Lichfield may have been an illegitimate son of the executed George Boleyn, but there is no evidence from any primary sources for his parentage.

But the trail also links to Clonony Castle, a mediaeval tower house near Birr, Co Offaly, that briefly belonged once to the Boleyn family. The castle was granted by Henry VIII to Thomas Boleyn, father of the ill-fated Ann and George, and eventually was home of Elizabeth and Mary Boleyn, exiled there after her death.

Claire Ridgway and Clare Cherry, in George Boleyn: Tudor Poet, Courtier & Diplomat (2014) suggest that when the elder George Boleyn was executed, that another illegitimate son, Thomas Boleyn, was moved to Clonony Castle for his safety, and that Elizabeth and Mary Boleyn were descended from this illegitimate son.

It has also been suggested that Elizabeth and Mary Boleyn were the granddaughters of George Boleyn, Dean of Lichfield. However, the Dean of Lichfield never once claimed to be the illegitimate son of George Boleyn, Lord Rochford, nor did he have any children himself, and he left his savings to be distributed among his servants. His family tree needs more historical research and less fictional speculation and fantasy. 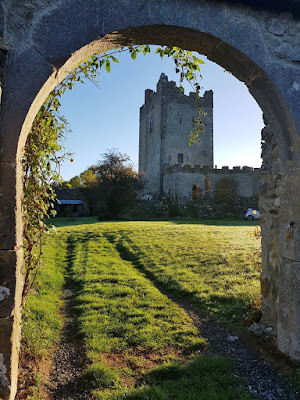 I realize your post is almost two years old, but I hoped to delve more into the question of whether George Boleyn the Dean of Lichfield (NOT the beheaded Viscount Rochford) never actually had children himself. You assert that he did not--is there any historical statement of that? The question of the Dean's parentage will never be "proved"--but it would be great to see if it can be established if he himself had offspring.