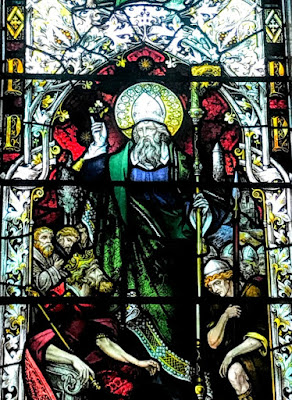 As I prepare to celebrate Saint Patrick’s Day tomorrow [17 March 2019], I paid a brief visit to Saint Patrick’s Church in Waterford this week, and then visited the site associated with the Waterford friar who should be acknowledged as the man who placed the liturgical celebration of this date in the Church Calendar.

Luke Wadding (1588-1657) is the Waterford Franciscan who turned 17 March into Saint Patrick’s Day. He was born in Waterford on 16 October 1588, the son of a Waterford merchant, Walter Wadding, and his wife Anastasia Lombard, sister of Archbishop Peter Lombard of Armagh.

Luke Wadding joined the Franciscans in Waterford and was ordained a priest in Portugal in 1613. He was sent to Rome in 1618, and there he was instrumental in founding Saint Isidore’s College for training Irish students preparing for ordination.

Luke Wadding, who was a cousin of Patrick Comerford, Bishop of Waterford and Lismore, succeeded in having 17 March designated Saint Patrick’s Day and becoming a feast day in the Calendar of the Church for the first time.

It seemed appropriate to visit Saint Patrick’s Church in Waterford on Friday morning [15 March 2019], and the site of the Franciscan Friary in Waterford associated with Luke Wadding.

There are records of Mass being celebrated on the site of Saint Patrick’s Church as early as 1704, and the present building dates from 1750. People in Waterford claim this is the oldest post-Reformation Roman Catholic church in Ireland. It predates Holy Trinity Roman Catholic Cathedral nearby on Barronstrand Street, and it is a rare example in Ireland of a Catholic church that survives from the first half of the 18th century, almost a century before Catholic Emancipation.

From the outside, the building looks like a large storehouse. The interior is a single cell with a horseshoe shaped gallery. Saint Patricks Church has considerable charm and is vividly evocative of the period in which it was built.

The church is in a narrow, closed alley between Great George’s Street and Jenkin’s Lane. The gateway on George’s Street is permanently locked, so it is easy to miss a building that is one of the hidden gems of Waterford.

This is five-bay two-storey Catholic church, built in the mid-18th century. It was renovated and extended around 1840, with the addition of a two-bay double-height chancel at the south-west (liturgical east) end and a round-headed door opening in a fluted pilaster doorcase, with pediment, moulded archivolt with a keystone, and timber panelled double doors with an over-panel.

The church was extended around 1890, with the addition of a two-bay single-storey sacristy at the south-east.

Because it has been comprehensively renovated and extended over the years, the church retains little of its original exterior fabric. But inside, much of the early form of this church remains intact. 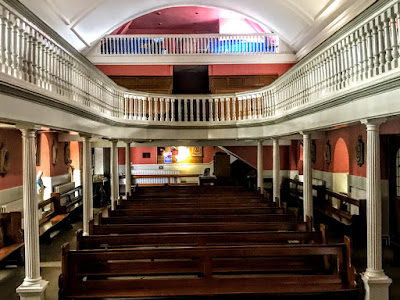 Inside, the church has a full-height interior with carved timber pews, a balustraded timber circumferential or U-shaped gallery on the first floor supported on fluted Doric columns. There is a decorative plasterwork Classical-style reredos with fluted pilasters, a frieze with triglyph motifs and a broken pediment over. The barrel-vaulted ceiling on a moulded cornice has plasterwork panels. 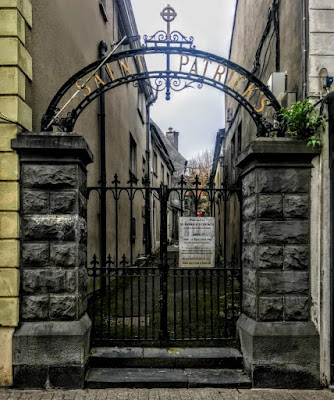 The church has two attractive gateways, one leading from Great George’s Street, the second at Jenkin’s Lane.

The late Victorian gate from Great George’s Street that dates from around 1890. This gate is made of a pair of rusticated limestone ashlar piers with moulded capping, cast-iron double gates that have fleur-de-lys finials, and a wrought iron arch with lettering. 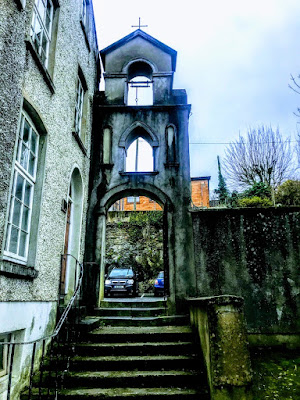 When it was renovated around 1995, the wrought iron gate was added and the bell was removed. 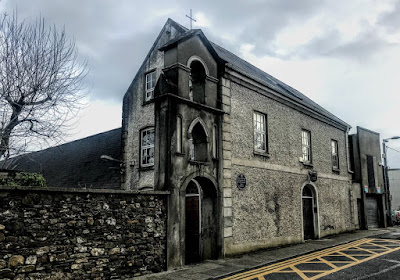 The building beside the Jenkin’s Lane gate and attached to the church is the site of the first school opened in Waterford by the Presentation Sisters. When they arrived in Waterford and were given temporary accommodation in Manor Street, and opened their school here on 6 November 1798.

This was the first free school in the south-east and was played a significant role in offering education to the poor people of Waterford. The building is now is a heritage centre. 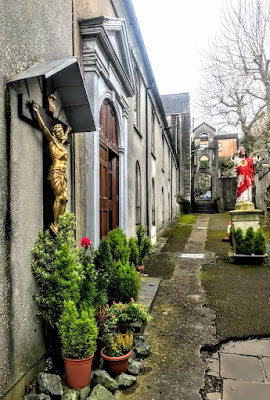 At the other end, the church is attached to the former Saint Patrick’s Home, which owes its foundation to Lawrence Carew, a Waterford merchant who lived in Cadiz.

By then, however, many long-established Catholic merchant families had left Waterford, and many had moved to France, Spain and Portugal. Three Waterford families in particular settled and prospered in Cadiz in Spain: the Whites, Walshes and Carews. One of the successful Waterford-born merchants in Cadiz included Lawrence Carew, who was born in Waterford in 1683 and left for Cadiz around 1713.

Carew became a Spanish citizen in 1731. In the 1750s he gifted a set of six silver candlesticks and a reliquary crucifix for the high altar in the ‘Big Chapel’ – the predecessor of the Catholic cathedral.

Carew also founded and endowed an almshouse for poor widows that was attached to Saint Patrick’s church off Jenkin’s Lane. After his death, the charity was administered by his son-in-law Nicholas Langton and was supported by the rental income from house property in Cadiz.

The house provided accommodation for 13 women who were given lodgings and were paid a pension of £4 a year. In 1956, 10 women were in residence although the yearly pension by then had been reduced to £3 a year.

This is a three-bay two-storey former almshouse, built in 1754, is set back from George’s Street and shares the grounds of Saint Patrick’s Catholic Church. It was extensively renovated around 1990 to accommodate a charitable hostel. 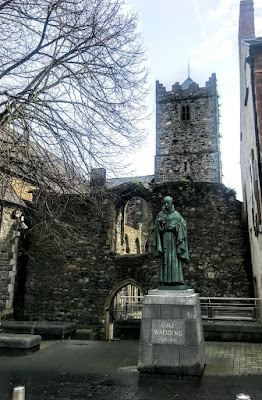 The statue of Luke Wadding outside Greyfriars in Waterford (Photograph: Patrick Comerford, 2019)

The Franciscan friary was built here in 1240, only 14 years after the death of Saint Francis of Assisi. Sir Hugh Purcell donated the church to the Franciscans. The 16th century writings of Donatus Mooney, Luke Wadding and the Annals of the Four Masters refer to Sir Hugh Purcell as the founder of the friary.

A 14th-century Franciscan chronicler, Bartholomew of Pisa, wrote of miracles that took place at the tombs of Father Nicholas and Father John of Waterford, probably in the 13th century.

Richard II stayed at the friary in 1394 while making plans to attack the Gaelic Irish in the Wicklow Mountains. The church was the scene of the surrender of four Irish chieftains – the O’Conor Don, de Burgo, O’Brien and O’Kennedy – to Richard II in 1395.

The bell tower which still stands, was added in the late 15th century and is 25 metres high.

At the Reformation, the friary was suppressed on 2 April 1540, and all but one of the bells from the tower were sold and moved to Christ Church Cathedral. The friars remained in Waterford. Part of the friary precinct, the ‘great garden’, was granted to David Bailiff in 1542. He was probably responsible for the opening of Bailey’s New Street, between the church and Reginald’s Tower.

Henry Walsh, a Waterford merchant, received a charter from Henry VIII in 1544 to convert the Friary into an almshouse known as the Holy Ghost Hospital. The almshouse remained on this site until 1815 when it moved to the Cork Road.

Meanwhile, the church was used for burials. From 1693, it became the church of French Huguenot refugees, and to this day it is known as ‘the French Church.’

The bell frame from which the bells were suspended in the tower remained on the site until 1809. The Methodists built a Gothic Revival church in 1885 on the site of the convent. 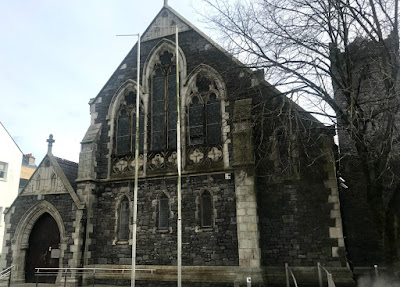 Drew was also commissioned in 1900 to design a restoration of the French Church as a memorial to Field Marshal Lord Roberts, but this was never carried out.

Although the interior of the French Church has extensively remodelled in 1999 to accommodate its use as an art gallery, the exterior retains its original picturesque form and character.

Part of Greyfriars Church today serves as a municipal art gallery and the location of ‘The King of the Vikings’ exhibition. Many of the ruins of the friary church still remains The current Franciscan church in Lady Lane, Waterford, was built in 1834 and refurbished in the 1930s. 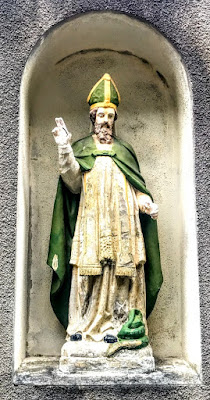