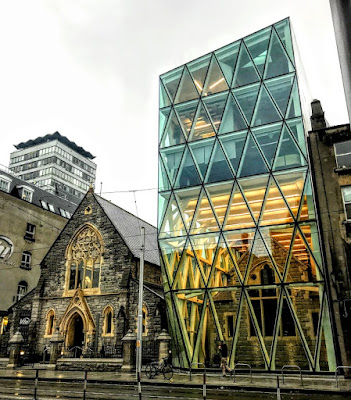 VHI Healthcare has expanded its offices into the former Scots Presbyterian Church and its neighbouring hall on Abbey Street, Dublin (Photograph: Patrick Comerford, 2018)

As I stood at the bus-stop in Abbey Street, Dublin, at the weekend, waiting for a bus to Clontarf, I noticed the way the former Scots Presbyterian Church and its former church hall have been incorporated tastefully into the headquarters of VHI Healthcare.

I have memories of meetings of Christian CND and the Student Christian Movement (SCM) in the church hall in 1980s, but the church has been closed since 2003.

McCauley Daye O’Connell Architects were appointed to design the expansion of VHI’s offices on Abbey Street into the adjacent disused Presbyterian Scots Church which is a protected structure. The VHI wanted to stay in its current location but needed to adapt the former church and the adjacent church hall, which had fallen into disrepair and were suffering from vandalism.

The key concept and challenges of their dynamic design were to respect and preserve the cultural, religious, historical and architectural heritage of the church and its ancillary buildings while meeting the client’s needs for a new, innovative and sustainable office extension.

This extension needed to fully integrate with the existing office accommodation, giving VHI improved and sustainable office facilities. And so, the former church and church hall were completely refurbished and returned to full use.

The new design provides a public entrance foyer in the former church, making it the primary public zone and entrance area for the building. It also provides new office floors suspended above the original church hall, all contained within a contemporary triangular exo-skeleton lattice design that provides the external structure, creating a building that is light and transparent and contrasts and complements the original Gothic church design.

The United Presbyterian Church of Scotland began working in Ireland in the 1840s but met with little initial success. This mission was aimed mainly at the Scots living in Dublin, and the first congregation may have met first in Aungier Street and then in Whitefriar Street.

By 1863, the congregation was meeting in the Pillar Room of the Rotunda Hospital. A formal congregation was installed in 1866 and the Revd James Stevenson became the first minister. Mission work also began in the North Strand area aimed at the many Scots living in that area.

Abbey Street was originally known as Great and Little Mary Street, and took its name from Saint Mary’s Abbey, which in the Middle Ages had lands that across the north-east of the city. When this church was built, Abbey Street already had four churches, and this was the fifth place of worship in a street that the Irish Builder noted ‘is not one of any great length.’

This was a gable-fronted three-bay double-height Gothic-Revival church in a style that was described as ‘Geometric Gothic,’ and it was designed by the Limerick-born architect, William Fogerty (1833/1834-1878), who also worked in Dublin, London, and New York during a short but intensive and creative career.

William Fogerty was a born in 1833 or 1834 into a well-known Limerick family of architects. His father was the architect John Fogerty, and an elder brother was the architect Joseph Fogerty. He studied at Queen’s College, Cork (now UCC), before joining his father’s practice in Limerick with his father in the 1850s. He was working from 97 George’s Street, Limerick, in 1861-1863.

He moved to Dublin in 1863, and was elected a Fellow of the Royal Institute of Architects of Ireland (FRIAI, 1863) and a council member (1867-1868). A year after designing the Scots Church on Abbey Street, Dublin, he went on a tour of Italy in 1869 with Thomas Henry Longfield. He then moved to London, where his brother was already in practice as an architect, and practised from Westminster Chambers, Victoria, and 8 Buckingham Street.

Fogerty’s church on Abbey Street was built by Crowe and Sons of Great Brunswick Street (now Pearse Street), Dublin, in granite, with dressing of limestone and freestone, at a cost of £6,000.

The church was designed with a nave measuring 70 ft by 28 ft in the clear, two side aisles, each 8 ft wide, separated from the nave by light columns and arches. The ground floor was to seat 450 persons, with another 70 in the gallery.

The main entrance was in the centre of the nave facing Lower Abbey Street, with a spacious porch and vestibule, with separate side entrances to the vestibule and school-room.

There was a lecture-room and a range of vestries at the rere, and a school-rook 45 ft by 22 ft at the side.

Fogerty’s originally designs for the church included a tower and spire, rising to 110 ft, at the north-west angle, but they were never built.

The church was formally opened in April 1869 by the Revd Professor John Eadie of Cambridge Street Church, Glasgow.

The Revd James Stevenson was succeeded by the Revd William Proctor in 1884. Six years later, the neighbouring single-storey church hall was built in 1890 in the Gothic Revival style to designs by the Belfeast-born architect Sir Thomas Drew (1838-1910).

Drew was a son of the Revd Canon Dr Thomas Drew, ‘a militant Orange’ clergyman who was Rector of Christ Church, Durham Street, Belfast, and later of Loughinisland, Co Down, and Precentor of Down Cathedral.

Drew became diocesan architect of the United Dioceses of Down, Connor and Dromore in 1865, but remained Murray’s chief assistant until 1867. Later he practised on his own, although in 1870 he worked closely with William Fogerty before Fogerty moved to the US.

The dwindling congregation of Ormond Quay and Scots Church decided to close its church in Abbey Street and to amalgamate with the Presbyterian Church in Clontarf in 2003.

The Presbyterian Church in Clontarf traces its roots to the two Secession congregations in at Mary’s Abbey and Mass Lane in Dublin that merged 200 years ago to form the Union Chapel. The Secession Synod started a mission in 1836 to form a second Secession congregation in Dublin. In 1837, this congregation bought Ebenezer Chapel on the corner of D’Olier and Hawkins Street for £600 to use as their church. The congregation moved to a new church in Lower Gloucester Street, now Sean McDermott Street, in 1846.

By the 1880s, many members of the congregation were living in the new suburbs of Fairview and Clontarf. In 1888, the Gloucester Street church decided to move to Clontarf, a site was found on the corner of Howth Road and Clontarf Road and the new church opened in 1890.

The Clontarf congregation welcomed the members of Ormond Quay and Scots Church in 2003, and the church in Clontarf is now known as Clontarf and Scots Presbyterian Church.

The minister of Clontarf and Scots Church, the Revd Lorraine Kennedy-Ritchie, was one of the speakers at the Clontarf Ecumenical Conference on Saturday.

The former Ormond Quay and Scots Church closed in 2003 and merged with Clontarf and Scots Presbyterian Church (Photograph: Patrick Comerford, 2018)