‘Woman, here is your son ... Here is your mother’ ... Mary and the Beloved Disciple in a crucifixion window in Christ Church Cathedral, Dublin (Photograph: Patrick Comerford)

Saint John the Divine on his deathbed ... from a window in Chartres Cathedral 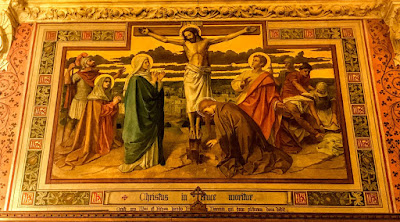 ‘Jesus dies on the Cross’ … Station XII in the Stations of the Cross in the Chapel in Saint Patrick’s College, Maynooth (Photograph: Patrick Comerford, 2019)

(Revd Canon Professor) Patrick Comerford is priest-in-charge, the Rathkeale and Kilnaughtin Group of Parishes. This is the third of seven reflections on ‘the Seven Last Words’ on Good Friday, 19 April 2019, in Saint Mary’s Church, Askeaton, Co Limerick.