Two windows in Derry
Cathedral remembering
the friends of children 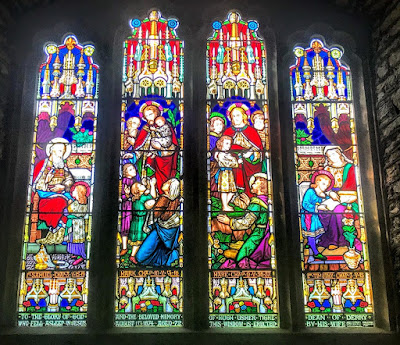 The best-known stained-glass window in Saint Columb’s Cathedral, Derry, is perhaps the window commemorating the hymnwriter Cecil Frances Alexander, wife of William Alexander, Bishop of Derry, illustrating three of her hymns: ‘Once in Royal David’s City,’ ‘There is a green hill far away,’ and ‘The golden gates are lifted up.’

But if Mrs Alexander is remembered as the author of children’s hymns, visitors should not overlook the children’s window in the south aisle in memory of the Very Revd Hugh Usher Tighe, Dean of Derry, who died in 1874.

The four lights refer to four images of childhood and faith (from left):

He was educated at Corpus Christi College, Oxford, and he was ordained deacon in 1826 and priest in 1827. That year, he also married Anne Florence McClintock, daughter of John McClintock of Drumcar, Co Louth, MP for Athlone and later for Co Louth, and Lady Elizabeth McClintock. Her grandfather was the Earl of Clancarty.

Tighe inherited the Carrick estate in Co Westmeath in 1833.

At first, he was the curate of Longbridge Deverill. He then became the Rector of Clonmore, Co Louth, and a Chaplain to Thomas de Grey, 2nd Earl de Grey, Lord Lieutenant of Ireland. 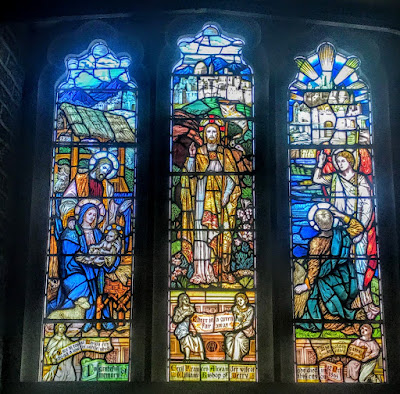