‘Return to your home,
and declare how much
God has done for you’ 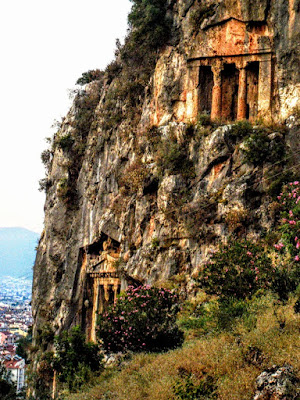 ‘For a long time … he did not live in a house but in the tombs’ (Luke 8: 27) … the Lycian rock tombs in the cliff faces above Fethiye in Turkey (Photograph: Patrick Comerford) 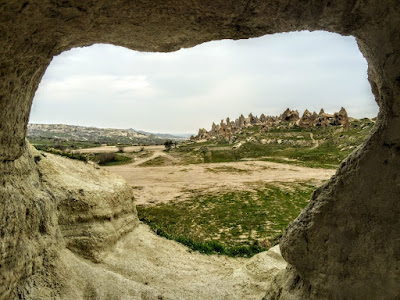 ‘When Elijah heard it, he … stood at the entrance of the cave’ (I Kings 19: 13) … in a cave in Goreme in central Turkey (Photograph: Patrick Comerford)

The path to ordination began almost 50 years ago, on a late summer afternoon in 1971, when I lifted the latch, pushed open the door, walked into the chapel at Saint John’s Hospital in Lichfield, and as I stood in ‘a sound of sheer silence,’ felt filled with the light and love of God.

I shall remember and celebrate these events this week while I am at the annual conference of the Anglican mission agency, USPG (United Society, Partners in the Gospel).

At that conference, I hope I have the grace to shut up enough so that, like Elijah, that as I listen for the voice of God, I may hear it in ‘a sound of sheer silence,’ or in what the King James Version of the Bible calls ‘a still small voice’ (verse 12).

I hope too that the speakers and the people I meet remind me that ordained ministry should never be about me. Indeed, ordained ministry should never even be confined to the limits or the boundaries of the Church … that at the heart of ministry, at the heart of the life of the Church, are love and breaking down the barriers and crossing the boundaries that exclude others.

In our readings this morning, the Prophet Elijah, the Apostle Paul, and Christ and the Disciples find themselves crossing the boundaries, and find that for God, in reality, there are no boundaries that exclude others.

These readings challenge us to think about who is clean and who is unclean, who are the outsiders and who are the insiders.

God is in control of all life, whether it is the storm and fire, the stormy arguments that divide communities, or our own interior storms that are capable of destroying our own thinking and our own minds.

In our Old Testament reading, the Prophet Elijah is fleeing a vengeful and murderous Queen Jezebel. He is forced to flee to the mountains and become an exile, a religious refugee, an outsider.

And just when he is at the point of wanting to give up, even of wanting to die, he climbs the mountain, and in the crag of the rock, instead of encountering the power and might of God in the great wind, the splitting of rocks, the earthquake or the fire, he realises God is present quietly, in ‘a sound of sheer silence,’ in the ‘still small voice.’

The man who has forcibly been made an outsider meets the living God, all his storms are subdued, and he realises he is the true insider.

Saint Paul’s Letter to the Galatians is the one book in the Bible that is addressed to a Celtic people. The central dispute at the heart of this letter is the debate about how Gentiles could convert to Christianity, at a time when the vast majority of Christians were Jewish or Jewish proselytes.

In the Church, there can be no more distinctions based on ethnic, social or gender differences. If we belong to Christ, we are the true, spiritual descendants of Abraham and heirs to God’s promises. There are no outsiders.

Our Gospel story (Luke 8: 26-39) is set by the Sea of Galilee. After Jesus calms a storm on the lake (Luke 8: 22-25), he and the disciples arrive on the other side and travel deep into Gentile territory, perhaps 30 or 50 km on the other side of the lake. The area is known as the Decapolis, dominated by ten Greek-speaking cities.

Imagine you are among the first group of people in the Early Church who begin to read this story. You would expect the story to unfold with Jesus and Disciples seeking out distant family members, staying with nice, upright people, perhaps visiting the local synagogue maintained by a tiny Jewish minority presence in one of the towns.

But from the very moment they get off the boat, they are in a place and among a people they would have regarded as unclean: these Gentile people are ritually ‘unclean,’ the man has an ‘unclean’ spirit, he is naked or a person of visible and public shame, he lives among the tombs, which are ritually unclean … and the pigs are unclean too.

This episode plays a key role in the theory of the ‘Scapegoat’ put forward by the French literary critic René Girard (1923-2015). The opposition of the entire city to the one man possessed by demons is the typical template for a scapegoat. Girard notes that, in the demoniac’s self-mutilation, he seems to imitate the way the villagers might have tried to stone him and to cast him out of their society.

For their part, the villagers in their reaction to Christ show they are not really concerned with the good of the possessed man. He acts as a scapegoat, and they can project anything they dislike about themselves onto him. Why kill him when he has such a useful function in their enclosed society?

Now, I do not in any way want to diminish or dismiss the real power of evil and the hold that it can have over people.

But in René Girard’s take on this story, the uneasy truce that the Gaderenes and the demoniac have worked out means he serves a ritual purpose for them so long as he is alive and perceived as being possessed.

But when Jesus steps off the boat, he brings with him a stronger spiritual power: love and healing, forgiveness and acceptance, are stronger than stoning, chaining, or scapegoating. And the pigs rushing headlong over the cliffside tell a story that is not so much about cruelty to animals but saying we need to put behind us all that we regard as unclean or sinful in others and need to start accepting ourselves.

After this episode, the man not only sits ‘at the feet of Jesus,’ as disciples did, but he becomes a missionary to other Gentiles. This is a story of dramatic transformation.

Look at the changes in this man’s life: he moves from outside the city to inside it; he moves from living in tombs and being driven into the desert to being alive in a house; he moves from nakedness to being clothed, from being demented to being of sound mind.

Saint Luke here uses the word οἶκος (oikos), which means a house, an inhabited house, even a palace or the house of God, as opposed to δόμος (domos), the word used for a house as a domestic home. Those who live there now form one family or household, and this comes to mean the family of God or the Church (for examples, see I Timothy 3: 15; I Peter 4: 17, and Hebrews 3: 2, 5).

The outsider, the person seen as unclean and defiled, the scapegoat, is restored to a full place in the Church, in God’s household, in God’s family.

Who do you think we see as Scapegoats today, as outsiders to be pushed to the margins, so that we can maintain the purity of our family, church or society?

Who do we expose and shame so that we can maintain the appearance of our own purity?

Are these the very people who might bring the good news to people on the margins, inviting them into the household of God? 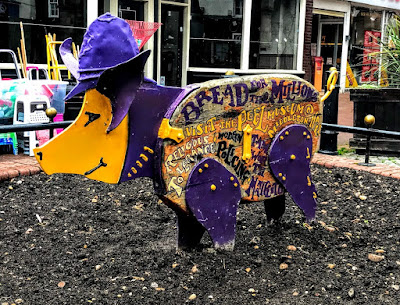 ‘Now there on the hillside a large herd of swine was feeding’ (Luke 8: 32) ... wooden sculptures of pigs throughout Tamworth celebrate the political achievements of Sir Robert Peel, including ‘bread for the millions’ and ‘religious tolerance’ (Photograph: Patrick Comerford, 2019)

26 [Jesus and his disciples then] arrived at the country of the Gerasenes, which is opposite Galilee. 27 As he stepped out on land, a man of the city who had demons met him. For a long time he had worn no clothes, and he did not live in a house but in the tombs. 28 When he saw Jesus, he fell down before him and shouted at the top of his voice, ‘What have you to do with me, Jesus, Son of the Most High God? I beg you, do not torment me’ – 29 for Jesus had commanded the unclean spirit to come out of the man. (For many times it had seized him; he was kept under guard and bound with chains and shackles, but he would break the bonds and be driven by the demon into the wilds.) 30 Jesus then asked him, ‘What is your name?’ He said, ‘Legion’; for many demons had entered him. 31 They begged him not to order them to go back into the abyss. 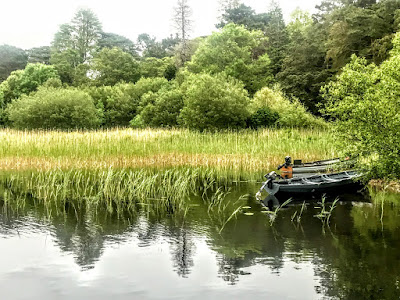 The Collect (the Opening of a Synod):

God,
who from old taught the hearts of faithful people
by sending them the light of your Holy Spirit:
Grant us by the same Spirit to have a right judgment in all things
and evermore to rejoice in his holy comfort;
through the merits of Christ Jesus our Saviour,
who is alive and reigns with you in the unity of the Spirit,
one God, now and for ever.

‘At that place he came to a cave and spent the night there’ (I Kings 19: 9) … the once-inhabited caves at Matala on the south coast of Crete (Photograph: Patrick Comerford)