Castle and bunkers are
reminders of sieges
of Corfu and Albania 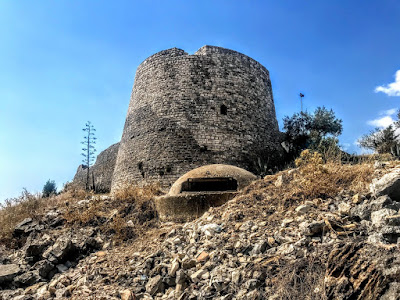 Lekuresi Castle, on a hill above Saranda, played a pivotal role in the siege of Corfu (Photograph: Patrick Comerford, 2019)

Between my visit to Butrint earlier this week, and my walking tour of the religious sites in Sarnada – including the site of an early synagogue, the Orthodox Church of Saint Charalambos and the City Mosque – I took a tour of Lekuresi Castle or Lëkurësi Castle, about 3 or 4 km away from the centre of Saranda.

The castle stands on the top of the hill of Lëkurës looking directly over Saranda. Lëkurësi Castle is on a strategic hill top overlooking the town of Saranda, and south-east of the town centre.

It was built in the early 16th century by Sultan Suleiman the Magnificent, who completed the castle by 1537.

This was the same sultan who had attacked Corfu and he needed to control the harbour of Saranda and the road that connected it with Butrint. The castle was built to guard the city of Saranda against invaders arriving by boat along the coastline by boat. The region traditionally belonged to the southern part of the region of Himara.

Suleiman the Magnificent led the Siege of Corfu in 1537 in an attempt to capture the island from the Republic of Venice at the beginning of the Ottoman–Venetian War (1537-1540).

At the time, the Ottoman Empire had entered an alliance with France, in which the Ottomans would attack southern Italy and Naples under Barbarossa, and Francis I would attack northern Italy with 50,000 men. Suleiman led an army of 300,000 from Constantinople to Albania, with the objective of transporting them to Italy with the fleet.

The Ottoman fleet gathered in Avlona with 100 galleys, accompanied by the French ambassador Jean de La Forêt. They landed in Castro, Apulia, by the end of July 1537, and left two weeks later with many prisoners. Barbarossa had laid waste to the region around Otranto, carrying about 10,000 people into slavery. Francis, however, failed to meet his commitment, and instead attacked the Netherlands.

The Ottomans left southern Italy, and instead diverted their forces to mount the Siege of Corfu, then held by the Republic of Venice, in August 1537. Suleiman decided to leave Avlona for Corfu on 19 August 1537. The fleet of about 320 ships started bombarding Corfu on 26 August. An Ottoman force of 25,000 men landed on the island of Corfu. At the siege, the Ottomans were met by the French Admiral, Baron de Saint-Blancard, who left Marseille on 15 August with 12 galleys and arrived at Corfu in early September.

Saint-Blancard tried in vain to convince the Ottomans to again raid the coasts of Apulia, Sicily and the March of Ancona. But eventually Suleiman, worried by a plague mong his troops, decided to return with his fleet to Istanbul by mid-September without having captured Corfu.

The French ambassador, Jean de La Forêt, became seriously ill and died around that time. Francis I finally arrived in Italy, and reached Rivoli on 31 October 1537.

Saint-Blancard’s fleet spent the wintered in Chios until 17 February 1538. It was decided that three ships would go to Constantinople, while the rest of the fleet returned to France. In Constantinople, they were received by the French ambassador, Charles de Marillac. Hayreddin Barbarossa provided for the expenses, and the French galleys finally left on 11 April 1538 to return to Nice through Monastir.

As a consequence of the Siege of Corfu, the Venetians formed an alliance with the Pope and the Habsburg against the Ottomans. On 18 June 1538, Francis I signed the Truce of Nice with Charles V, and so abandoned his alliance with Ottomans, for the time being.

Lekuresi Castle was attacked at the end of the 18th century by Ali Pasha of Ioannina, and the surrounding areas were raided. 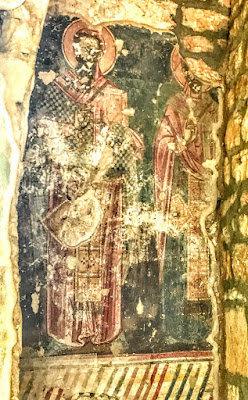 The remains of Byzantine frecoes in the walls of Lekuresi Castle (Photograph: Patrick Comerford, 2019)

The castle is square in shape and has two round towers at its north-west and south-east corners. At one time, the village of Lëkurës was enclosed within the castle walls.

During the isolated regime of Enver Pasha, that closed Albania to the outside world from the 1960s to the 1980s, the bunkers and sentry lookouts were built on the slopes surrounding the castle.

These concrete bunkers can be seen throughout Albania, with an average of 5.7 bunkers for every square kilometre. By 1983, a total of 173,371 concrete bunkers had been constructed across Albania.

Now it was Albania, and not Corfu, that felt besieged.

But inside the castle wall we found much older Byzantine mosaics, perhaps moved here from a village church and with lit candles showing evidence of local devotion and veneration that had turned the alcove into a makeshift castle. 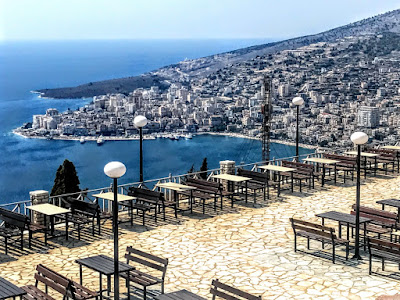 The castle, sometimes a venue for summer concerts, offers commanding views of Corfu and Ksamil islands and of the surrounding countryside. The Castle Restaurant inside the walls also has a bar, but both the restaurant and bar were empty when we visited.

The castle is open from 10 am to 11 pm, seven days a week, and there is no entrance fee.

It takes 45 to 60 minutes to walk there from the centre of Saranda, but it is uphill most of the way. The road leading up to the castle is not in great condition and it is easier to visit the castle using a taxi, although haggling about the fare beforehand is strongly recommended. 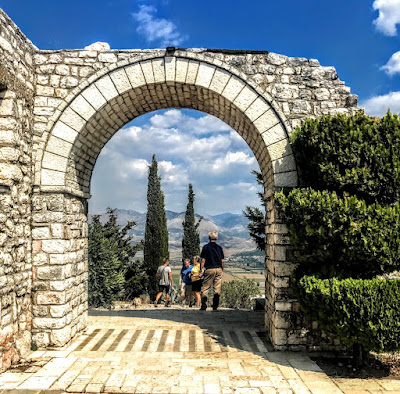 Lekuresi Castle is open to visitors throughout the year (Photograph: Patrick Comerford, 2019)