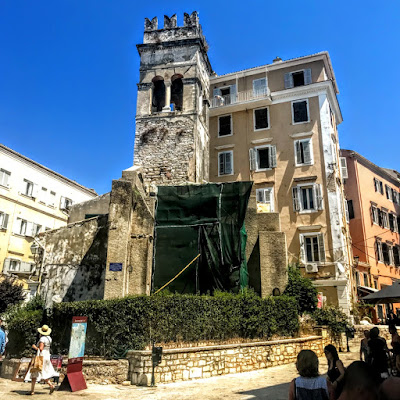 George Nugent Grenville, who was born on 31 December 1789, was a younger son of George Nugent-Temple, 1st Marquess of Buckingham. His mother, Lady Mary Elizabeth Nugent, was the only daughter and heiress of Robert Craggs Nugent (1709-1788) of Carnalstown, Co Meath, who became Viscount Clare in 1766 and the Earl Nugent in 1776.

At one time, the family’s estates in Co Westmeath, Co Longford and Co Clare totalled 15,991 acres. Nugent was educated at Brasenose College, Oxford, and in 1810 received the honorary degree of DCL from Oxford.

Nugent became one of the Lords of the Treasury in 1830, but he resigned this position and his seat in the House of Commons in August 1832 when he was appointed the Lord High Commissioner of the Ionian Islands.

As Lord High Commissioner of the Ionian Islands, Nugent entertained a visiting King Otho of Greece in the Solomos family villa in Zakynthos.

It may have been at the Solomos villa in Zakynthps that Nugent introduced Eliza-Dorothea Tuite, from Nenagh, Co Tipperary, to Count Giovanni Salomos or Solomos of Zakynthos. They were married in 1838, giving the Irish Philhellenes an interesting family connection with Dionysios Solomos, author of Hymn to Liberty, the Greek national anthem.

Nugent remained the High Commissioner in Corfu for three years, living at the Palace in Corfu. He was rewarded with being made a Knight Grand Cross of the Order of Saint Michael and Saint George, an order associated particularly with Corfu.

In politics, Nugent was a Radical Whig and a strong supporter of Queen Caroline of Brunswick. He visited Spain as a partisan of the Spanish Liberals against the Carlists, advocated the abolition of capital punishment, and supported a measure for the further repeal of Penal Laws. He died on 26 November 1850.

Meanwhile, Eliza and Giovanni settled in the Greater Athens area, and both were buried from Saint Paul’s Anglican Church in Athens.