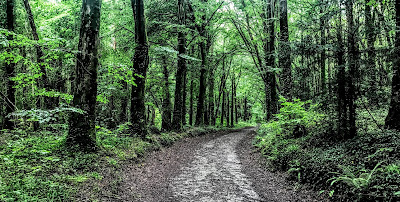 Walking in the woods at Curragh Chase, near Kilcornan and Askeaton, Co Limerick (Photograph: Patrick Comerford, 2019)

The name of the café celebrates the fact that Curragh Chase, about 10 km east of Askeaton, was the estate of the de Vere or Hunt family for 300 years, from 1657 to 1957.

Today it is a forest park, popular with campers and walkers, particularly at this time of summer. But the Hunt or de Vere family is celebrated in quotations from the poet Aubrey de Vere that line the café walls, and two large Celtic crosses that remember many family members.

Two large Celtic crosses on the Curragh Chase estate commemorate many members of the family. 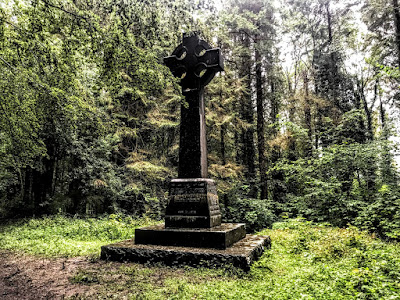 In the woodland walks, a large cross commemorates Robert Stephen Vere de Vere (1872-1936), an Irish judge in the British Colonial Service. He was born on 13 July 1871, the son of Major Aubrey Stephen Vere O’Brien of Adare, Limerick, Ireland and changed his surname to de Vere by Royal Licence after inheriting Curragh Chase on the death of his father in 1898.

He was educated at Winchester School and Trinity College, Cambridge, where he was graduated BA (1891), and LL.B. (1894). He then entered the Middle Temple to study law and was called to the bar in 1898.

His wife Isabel Moule, was a daughter of Handley Moule (1841-1920), Bishop of Durham and a former Cambridge theologian.

He joined the Colonial Civil Service in Limerick and was a magistrate before going to South Africa during the Boer War.

He was posted to the Gold Coast as a District Commissioner (1903-1905) and then to the Seychelles as a legal adviser and crown prosecutor. During World War I, he was a Military Censor. From 1922 to 1926, he was the British Judge in the Anglo-French Condominium of New Hebrides, before spending two years in Cyprus as President of the District Court.

The cross to his memory has inscriptions on four sides of the base that commemorate his work, his wife, his career and his devotion to the Curragh Chase estate.

The inscription on raised letters at the front of the base reads:

To the glory of God
and
to the beloved memory
of Robert Stephen Vere
de Vere, this memorial
was set up by his wife
Isabel Catherine
God is Love

He served God and man
by public work freely
given at home and in his
colonial appointments:
Gold Coast, New Hebrides,
Cyprus, Seychelles, Grenada,
as Chief Justice and friend
of all in need.
1872 + 1936

My work is with my God
his servants shall serve him

The inscription at the back of the base, quoting Isaiah 6: 3, a well-known hymn and Psalm 121 reads:

The whole earth is full of his glory

For the beauty of the earth,
hill & lake & flower & tree,
for the splendour of the skies,
and the wonders of the sea,
Lord of all to thee we raise,
this our grateful song of praise.

I shall lift up mine eyes unto the hills
from whence cometh my help.
My help cometh from the Lord,
who made heaven and earth.

The inscription on the left side of the base reads: 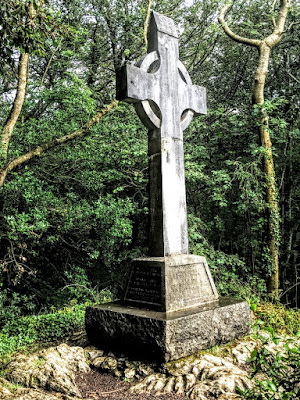 The second cross is on the top of rocky outcrop (Photograph: Patrick Comerford, 2019)

The second cross is on the top of a rocky outcrop looks across the lake at Curragh Chase and over to the house.

The inscription at the front of the base reads:

The inscription at the back of the base reads:

The inscription on the left side reads:

The poet Sir Aubrey (Hunt) de Vere, 2nd Baronet (1788-1848) was the son of Sir Vere Hunt, 1st Baronet and the Hon Eleanor Pery, daughter of William Pery, 1st Baron Glentworth. He was educated at Harrow, where he was a childhood friend of Lord Byron, and Trinity College Dublin. He married Mary Spring Rice, a daughter of Stephen Edward Rice and Catherine Spring, and sister of Thomas Spring Rice, Lord Monteagle, in 1807, and succeeded to his father’s title and estates in 1818.

Sir Aubrey suffered financial troubles because of his ownership of Lundy Island, which his father had bought unwisely in 1802. He was High Sheriff of Co Limerick in 1811. He changed his surname from Hunt to de Vere in 1832.

Wordsworth said Aubrey de Vere’s sonnets were the most perfect of the age.

His third son Aubrey Thomas de Vere (1814-1902), who was born at Curragh Chase House, was also a poet and critic who was strongly influenced by Wordsworth and Coleridge.

At Oxford, he came under the influence of John Henry Newman, and he was received into the Roman Catholic Church by Cardinal Manning in Avignon in 1851, Later, he was a professor at the Catholic University in Dublin. He is buried in the churchyard at Saint Mary’s Church, Askeaton.

His sister Eleanor married the Hon Robert O’Brien, a brother of the patriot William Smith O’Brien.

Their brother, Sir Stephen Edward de Vere, 4th Baronet (1812-1904) was the second son of Sir Aubrey de Vere, 2nd Baronet. In 1847, he travelled in one of the ‘coffin ships’ that transported famine emigrants to North America.

Sir Stephen de Vere also built a smaller house in the 1850s on Foynes Island in the 1850s. There he wrote poems, political pamphlets and translated several editions of the works of Horace, and a built a Gothic revival Roman Catholic church in Foynes, where he was buried in 1904. 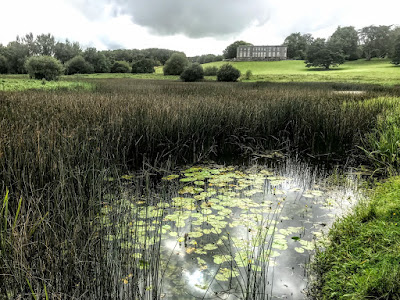 The ruins of the house at Curragh Chase and the lake seen from the cross on the rocky outcrop (Photograph: Patrick Comerford, 2019)