An evening in Porthleven,
the most southerly port
and harbour in Britain 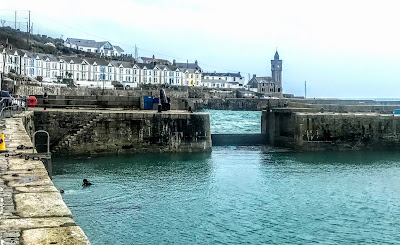 Porthleven is the most southerly port in the United Kingdom (Photograph: Patrick Comerford, 2019)

After visiting Marazion and St Michael’s Mount in Cornwall on an overcast, wet afternoon, last week, the family group I was with continued on south along the coast of Mount’s Bay to the fishing harbour of Porthleven, where we had dinner that evening.

Porthleven, with its granite harbour and pier and its famous clock tower, has a population of about 3,000, and is the most southerly port in the United Kingdom.

During winter storms, many people visit the town to watch the waves crashing over the sea defences and storms roll in from the Atlantic. 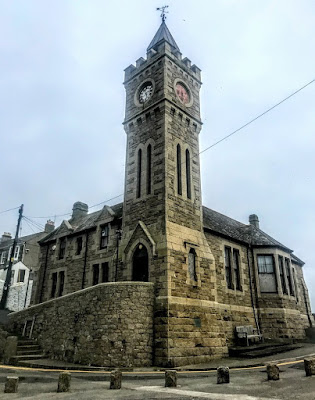 The Bickford-Smith Institute in Porthleven is one of the landmark buildings of Cornwall (Photograph: Patrick Comerford, 2019)

Porthleven’s harbour is best known for the Bickford-Smith Institute, a prominent building next to the pier and harbour entrance. It looks like a church, and its clock tower, standing 20 metres high, makes it one of the landmark buildings of Cornwall.

The tower has been painted by many artists and is used as popular image of Porthleven. A photograph of the building with large breaking waves often appears in the background of BBC weather forecasts, particularly when windy conditions and rough seas are expected.

The institute has a plaque to Guy Gibson VC, the leader of the Dambuster Raid, on the wall facing the harbour. Gibson was born in India, but his mother was from Porthleven, his parents were married here, and he regarded Porthleven as his hometown.

Gibson visited the town regularly during World War II, and occasionally attended Porthleven Methodist Church. He was killed in 1944 and his name is included on the community’s war memorial and Gibson Way in the town is named after him.

Today, the institute building houses the town council offices and is also used by a snooker club.

The present village began with the construction of the harbour in 1811(Photograph: Patrick Comerford, 2019)

The history of Portleven dates back to at least the mid-11th century, and nearby Methleigh is said to have been the site of a fair and annual market from the year 1066. After the Norman Conquest, the Manor of Methleigh was held by the Bishop of Exeter but the Earl of Cornwall possessed the fair.

The name Porthleven is probably connected with Saint Elwen or Elwyn, who gave his name to a chapel that stood here before 1270. There were also chapels in neighbouring Higher Penrose and Lanner Veor and a holy well at Venton-Vedna.

Saint Elwen’s chapel was rebuilt about 1510, but it was destroyed at the Reformation in 1549. 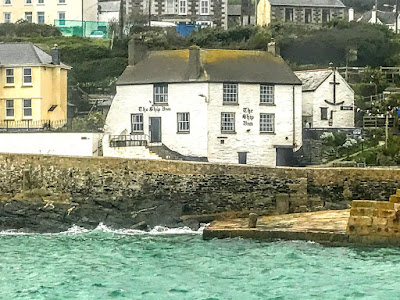 The Ship Inn in Porthleven dates from the 17th century (Photograph: Patrick Comerford, 2019)

The Ship Inn in Porthleven at the harbour is said to date from the 17th century. However, Porthleven did not develop until the days of sail, when it became a harbour of refuge at a time when this part of the Cornish coast was a black spot for wrecks. Due to the prevailing westerly winds, it was easy for a ship under sail to be trapped in Mount’s Bay and wrecked nearby.

The present village began with the construction of the harbour in 1811. The harbour faces south west into the prevailing wind and so building the harbour and sea walls was a major undertaking.

From the cliffs there are views of the abandoned engine houses of the tin mine at Rinsey and of Tregonning Hill, an extinct volcano where china clay was first discovered in England.

Although Saint Bartholomew’s, the parish church, was built in Porthleven in 1842, the town remained part of the neighbouring small parish of Sithney until 1844.

The Royal National Lifeboat Institution stationed a lifeboat at Porthleven in 1863. A boat house was built at Breageside, and from there the boat was taken to the water on a carriage.

Shipping china clay from Porthleven came to an end in 1880. But by then Porthleven had also become a centre for shipbuilding, employing up to 20 people at times. Between 1877 and 1883, 52 fishing boats were built here, ranging in length from 6.7 m to 17 metres. The harbour once had a fleet of more than 100 drifters used to fish pilchard and mackerel.

A new boat house opened on the west side of the harbour entrance in 1894 with a slipway to make launching easier. The station was closed in 1929 and the slipway was dismantled. The boat house was used as a store for a while, later become the Shipwreck Centre museum, and is now a gallery, studio and party venue. 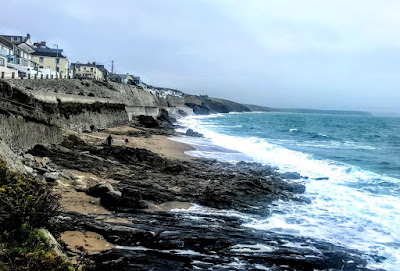 The small beach below the harbour at Porthleven (Photograph: Patrick Comerford, 2019)

Porthleven lies within the Cornwall Area of Outstanding Natural Beauty, and the South West Coast Path, which follows the coast from Somerset to Dorset and passes through the town.

Porthleven remains the most southerly working port in the United Kingdom. But it is also popular with artists and has several studios and craft shops, as well as several good restaurants and a small beach.

We stopped briefly for a drink in the Harbour Inn, and had dinner that evening at Kota Kai in Celtic House at Harbour Head. Kota Kai and its neighbour, Kota Restaurant, where Jude Kereama is the head chef. 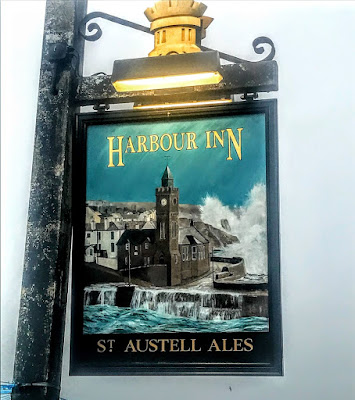 The Harbour Inn at the harbour uses the clock tower as its pub sign (Photograph: Patrick Comerford, 2019)