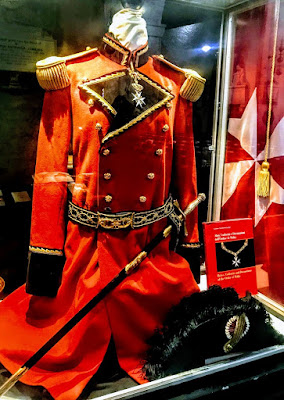 A colourful exhibition in Saint Mary’s Cathedral, Limerick, tells the story of the Order of Malta (Photograph: Patrick Comerford, 2019)

The current, colourful exhibition in Saint Mary’s Cathedral, Limerick, looks at the work of the Sovereign Military Order of Malta, its Ambulance Corps and its history.

The exhibition, which runs for a month, was organised to coincide with an Ecumenical Service in the cathedral last Sunday [20 October 2019] and the unveiling of a commemorative stone that marks the presence of the order in Limerick City for over 800 years.

Sunday morning was a major celebration for the Order of Malta in Limerick. Members of the Limerick unit were joined by the council and members of the Irish Association of the order (SMOM), local dignitaries, and members of the ambulance corps at the ecumenical service hosted by the Dean and Chapter of Saint Mary’s Cathedral.

The Order of Malta claims recognition in international law as a sovereign entity (Photograph: Patrick Comerford, 2019)

Today, the Order of Malta Ambulance Corps in Limerick is based at Saint John’s House on Davis Street. But the Sovereign Military Hospitaller Order of Saint John of Jerusalem, of Rhodes and of Malta – to give it its full, formal name – dates back to 1099, and has had a presence in Limerick since 1212.

Like the Vatican City, the Palazzo Malta and its other properties in Rome form an independent enclave. The order is recognised in international law as a sovereign entity, maintains diplomatic relations with 107 states, and has permanent observer status at the UN. It has humanitarian missions throughout the world, particularly in areas of conflict.

The Sovereign Military Order of Malta (SMOM), or simply the Order of Malta, or the Hospitallers, claims it is the oldest order of chivalry in the world. It was founded in Jerusalem in 1099, and since then it has helped to alleviate suffering among the poor and the sick around the globe.

Essentially, the order is an international organisation of Roman Catholics who are members of the laity and who, as knights, dames and donats of Saint John, bear witness to Christ’s words, ‘Love thy neighbour.’ This is expressed in the Order’s motto, Tuitio Fidei et Obsequium Pauperum, ‘Defence of the faith and assistance to the poor.’

Most members are married and live and work ordinary lives. A small number take full religious vows but are self-supporting. Although members of the order are Roman Catholics, it is not a papal order. It recognises the Lutheran Johanniterorden and the Anglican/Episcopalian Venerable Order of Saint John, sharing the same values and mission, and it works closely with them in humanitarian and charitable activities. 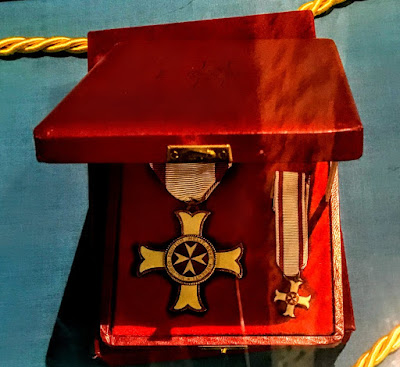 The Order of Malta claims it is the oldest order of chivalry in the world (Photograph: Patrick Comerford, 2019)

Pope Paschal II recognised the order in 1113 as an independent sovereign entity under the governance of its elected princely grand master and sovereign council.

The order first arrived in Ireland in 1171. It soon established preceptories or houses that offered medical care services and facilities, in Co Wexford and Co Waterford. By 1174, the order’s Irish headquarters, the Priory of Ireland and Hospital of Saint John was located at Kilmainham in Dublin.

The second great hospital in Ireland was the Preceptory of Any in Co Limerick, which gives it name to the town of Hospital. It was founded by Geoffrey de Mareis or Marisco in 1215. However, the order was present in Limerick City for some years before that. Ancient maps indicate the site of the order’s ‘Frankhouse’ at the corner of Creagh Lane, opposite the corner of the wall of old Saint Mary’s cemetery at the south-west corner of the cathedral and its south door.

From 1212, when the order was confirmed in possession of its church and house in Limerick, it maintained its charitable hospitaller activities in the city. Within a few years, the order had founded over 129 centres in Ireland, including lazar-houses for the care of lepers, in Kilkenny, Carlow, Tipperary, Cork, Limerick, Kerry, Kildare, Meath, Louth and Down. Some historians suggest that the Knights Hospitaller took possession of Saint Mary's Church, Askeaton, after the Knights Templar were suppressed in Ireland in 1309.

The mediaeval Priory of Ireland was a separate institution from the Grand Priory of England, and it reported directly to the Order’s Grand Masters in Jerusalem and later in Rhodes. There is evidence that some Irish Knights had brought the devotion to Saint Brigid of Kildare to the Holy Land.

Many of the Irish priors were colourful characters. Roger Utlagh or Outlawe opposed Bishop Richard de Ledrede’s witch trial of the prior’s sister-in-law, Alice Kyteler, in Kilkenny in 1324.

Like other religious foundations and orders in Ireland, the order was dissolved at the Reformation in 1540. It was restored for a brief period under Queen Mary I in 1557, but was suppressed again with the succession of Queen Elizabeth I in 1558.

However, Irishmen continued to join the order in Continental Europe and titular Priors of Ireland continued to be appointed. They included Mathurin d’Aux de l’Escout Romegas (1557-1581), one of the heroes of the Great Siege of Malta in 1565 and of the naval Battle of Lepanto in 1571.

During the three sieges of Limerick in 1651, 1690 and 1691, members of the order were present in the city providing medical care and assisting in the defence of Limerick.

Count Laval Nugent from Westmeath (1777-1862) was a key figure in liberating Croatia and the Italian peninsula from Napoleonic domination by 1813, and was made a Roman Prince, an Austrian Count and a Knight of the Golden Fleece. In 1860, he was appointed the titular Prior of Ireland (1860-1862). 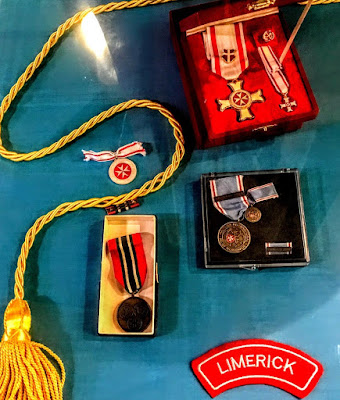 The order was formally re-established formally in Ireland in 1934 (Photograph: Patrick Comerford, 2019)

However, the order was not re-established formally in Ireland until the 20th century. During the Eucharistic Congress in Dublin in 1932, the representatives of the Order’s Grand Master, Fra’ Ludovico Chigi della Rovere Albani, contacted members of the Old Irish Catholic nobility, such as Charles O’Conor Don of Clonalis, Thomas Gaisford St Lawrence of Howth, Patrick Valentine MacSwiney of Marshanaglass, William Wilson-Lynch of Thomond, and Andrew Bonaparte-Wyse of Waterford.

They were admitted into the order as knights, and the order was re-established in Ireland as the title Irish Association of the Order of Malta in 1934. The first President of the Irish association, Charles O’Conor Don, was a direct descendant of the last High King of Ireland, Rory O Conor (1166-1198).

The first unit was established at Galway. Within 10 years, there were ambulance corps units in other Irish cities and towns, and they are still actively engaged in providing emergency medical assistance to local and rural communities. This service provided the blueprint and example for the development of similar ambulance and mobile emergency medical services in other countries.

The Irish Association has since expanded its activities, providing care and support services for the disabled, elderly, marginalised and vulnerable, and providing support for maternity and medical services in the order’s hospital in Bethlehem.

The Irish granite memorial in the grounds of Saint Mary’s Cathedral, Limerick, on Sunday includes the order’s motto: Tuitio fidei et obsequium pauperum (‘Defence of the faith and assistance to the poor’). The inscription reads: ‘The Knights Hospitaller of St John of Jerusalem of Rhodes and of Malta maintained a Frankhouse on this site 1212-1540.’

The exhibition in Saint Mary’s Cathedral tells the story of this unique presence in Limerick that is mediaeval in its origins and modern in the scope of its work. 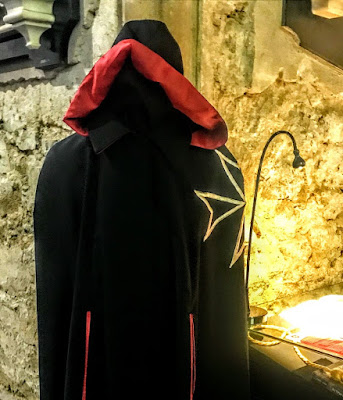 The exhibition in Saint Mary’s Cathedral tells the story of a unique presence in Limerick (Photograph: Patrick Comerford, 2019)