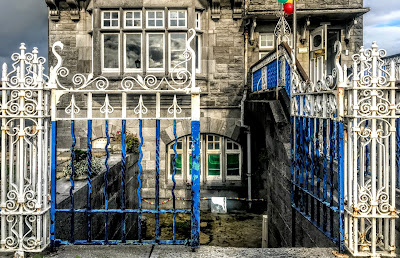 As part of the Open House events in Limerick last weekend (19-20 October 2019), I went to exhibition on the work of the architect William Clifford Smith in Shannon Rowing Club at Sarsfield Bridge, one of the many landmark buildings he designed in Limerick.

William Clifford Smith (1881-1954) was included in the ‘Open House’ programme as one of the city’s ‘Historical Visionaries,’ who is associated with the stories of well-known Limerick landmarks and hidden corners and was part of the Arts and Crafts and Modernist movements.

Appropriately, Clifford Smith designed the Arts and Crafts-style Edwardian clubhouse of Shannon Rowing Club. This highly elaborate clubhouse stands out, not only for its architectural beauty, but because of its location on an artificial island between a canal and the River Shannon, connected to Sarsfield Bridge.

Shannon Rowing Club, the oldest rowing club in Limerick City, was founded in 1866 by Sir Peter Tait, the Limerick entrepreneur who is remembered today in the Tait Clock in Baker Place. The club celebrated its 150th anniversary in 2016. 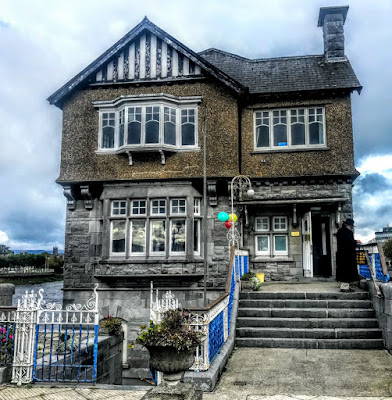 Clifford Smith was an inventive young English architect when he won an international competition in 1902 to design the new clubhouse. The clubhouse was built by Messrs Gough at a cost of £2,000 and was completed in 1905.

This is a highly elaborate clubhouse in the Edwardian Arts and Crafts idiom. It is such a fine example of Edwardian architecture that, as far as I know, it is the only listed sports building in Ireland. 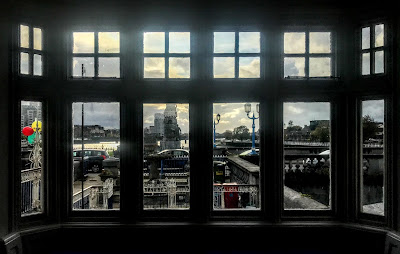 William Clifford Smith’s attention to detail is seen in the interior details in the clubhouse (Photograph: Patrick Comerford, 2019)

On winning the competition, Clifford Smith decided to stay to Ireland, and he settled in Limerick. In 1906, he designed a terrace of small dormered cottages at Fair Green in Adare, Co Limerick, for the 4th Earl of Dunraven. In 1907, Dunraven also invited Clifford Smith to design the Village Hall and Clubhouse in Adare in the Arts and Crafts style. 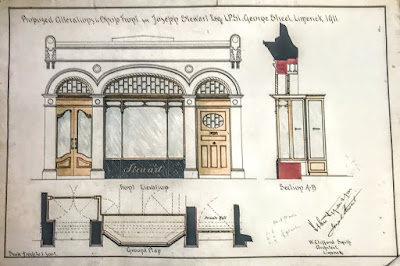 His design for the Shannon Rowing Club gave impetus to an Edwardian freestyle that marked out the building on Limerick’s riverscape. As the exhibition pointed out, It is a style that can be seen too throughout the city in the suburban houses he designed in Ennis Road, O’Connell Avenue and Shelbourne Road. 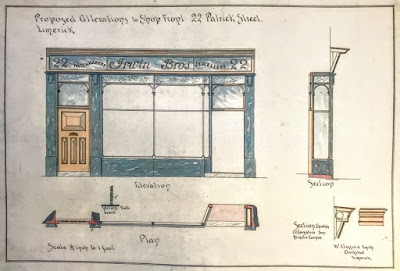 By 1911, Clifford Smith was boarding in the home of Elizabeth McCarthy on Ennis Road. He may have served in the Royal Engineers during World War I. But he had returned to Limerick by 1917, when he married Jane Downey in in Saint Michael’s Church, Pery Square, on 27 June, and they lived at Northesk, Lansdowne, Limerick, after the war. In 1919 he designed what is now the Belltable Arts Centre at 69 O’Connell Street.

The exhibition panels show how this was the Coliseum Theatre and then the Gaiety Cinema. The former Georgian townhouse was substantially remodelled at ground floor level to accommodate a theatre in the late 19th century, and in the 20th century it became one of the most important venues in Limerick for the performing arts.

The former townhouse is one of the larger three-bay houses in a terrace of 11 houses between Hartstonge Street and Mallow Street, and which has been described as ‘one of the most noble street elevations in the city.’ Clifford Smith designed the limestone front at ground floor level with panache and without compromising the uniform quality of the streetscape. The façade continues to retain his bold elliptical arch and mannered columns.

Clifford Smith worked from 75 O’Connell Street for much of his career. In 1928, he formed a partnership with Edward Newenham, known as Clifford Smith & Newenham.

In 1937, his only child, his daughter Doreen, married Charles Johnston. He died at home on 27 June 1954, and was buried with his wife and grand-daughter, Carys Clifford, at Saint Mary’s Cathedral, Limerick.

Clifford Smith & Newenham amalgamated with the Dublin practice of Dermot Mulligan in 1968 to become Newenham Mulligan & Associates (NMA), an award-winning practice of architects , master planners, project managers, and graphic and interior designers with offices in Dublin. 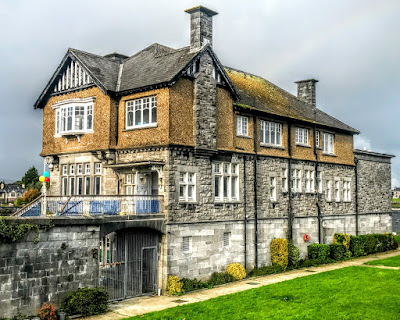 Shannon Rowing Club stands on an artificial island between a canal and the River Shannon, connected to Sarsfield Bridge (Photograph: Patrick Comerford, 2019)