Saint Sophrony: a new saint
from Mount Athos who
founded a monastery in Essex

Father Sophrony of Essex, founder of the Monastery of Saint John the Baptist in Tolleshunt Knights, was proclaimed a saint by the Ecumenical Patriarch on Mount Athos this week

Patriarch Bartholomew has announced the canonisation of Elder Sophrony (Sakharov) of Essex. The Greek news bulletin Pemptousia, published by the Friends of Vatopaidi Monastery, reported last night that the Ecumenical Patriarch proclaimed the new saint [22 October 2019] during his visit to Mount Athos.

Elder Sophrony (1896-1993) is known as the spiritual child and biographer of the great Saint Silouan the Athonite and the founder of the Monastery of Saint John the Baptist in Tolleshunt Knights, Essex.

I became familiar with the life and story of Saint Sophrony when I spent a day each summer for almost a decade on a retreat in the monastery, about 75 km south-east of Cambridge. Those visits were organised by the Institute for Orthodox Christian Studies as part of the summer schools that were held each year in Sidney Sussex College, Cambridge.

During those visits to the monastery, I regularly visited the crypt where Archimandrite Sophrony, the founder of the monastery, is buried, and have listened to Sister Thecla tell the story of Father Sophrony. 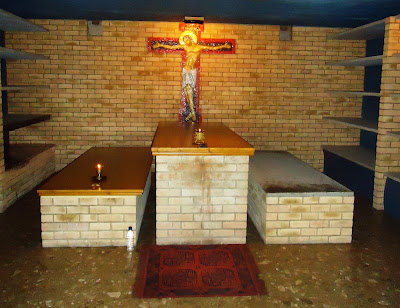 The tomb of Father Sophrony in the crypt in Saint John’s Monastery in Tolleshunt Kinghts (Photograph: Patrick Comerford)

Saint Sophrony was born Sergei Symeonovich Sakharov in Moscow on 23 September 1896, the son of Russian Orthodox parents. As a child, he prayed daily, later recalling that he would pray for 45 minutes without stress.

Sister Thecla has told us how, even as a child, he claimed to have experienced the Uncreated Light, but thought casually that every other child had similar experiences. He read widely, and his reading included Russian greats such as Gogol, Turgenev, Tolstoy, Dostoyevsky and Pushkin.

With his recognised artistic gifts and talents, he studied first at the Academy of Arts (1915-1917), and then at the Moscow School of Painting, Sculpture and Architecture (1920-1921). During this time, he used art as a ‘quasi-mystical’ means ‘to discover eternal beauty,’ ‘breaking through present reality ... into new horizons of being.’ Later, this would help him to differentiate between human intellectual light and God’s Uncreated Light.

However, as he came to see the Christian focus on personal love as finite, he fell away from the Orthodoxy of his upbringing and started to explore Eastern mysticism.

He left Russia in 1921, partly to continue his artistic career in Western Europe, but also because he felt isolated in post-revolutionary Russia because he was not a Marxist. He moved first to Italy, then to Berlin, before arriving in Paris in 1922, where his exhibitions attracted much attention from the French media.

However, he was frustrated by the inability of art to express purity, and he realised that rational knowledge was unable to provide an answer to the biggest question of all: the problem of death.

Back in Paris, he realised that ‘I’ in God’s call to Moses (‘I am who I am’) and the Gospel command to love God, were a call to personal relationship. One cannot love a concept, and he found that love is relational.

Having come to realise that Christ’s precept to love God totally is not psychological but ontological, and that the only way to relate to God is personal, and that the necessity of love is personal, he returned to Christianity on Great Saturday, the day before Easter Day or Pascha 1924.

However, his experiences of the Uncreated Light now distanced him from his art. He began studying at Saint Sergius Orthodox Theological Institute in Paris, where he was among the first students. His lecturers there included Sergius Bulgakov and Nicholas Berdyaev.

Nevertheless, he found formal theological education unfulfilling, and in 1925 he left Paris for Mount Athos. There he entered the mainly Russian Monastery of Saint Panteleimon in the hope of learning how to pray and how to have the right attitude to God.

Father Sophrony was ordained a deacon by Saint Nicolai (Velimirovic) of Zicha in 1930, and soon became a disciple of Saint Silouan the Athonite, who became his greatest influence, despite the fact that Saint Silouan had no formal theological education and was never ordained a priest.

Saint Silouan died on 24 September 1938, entrusting his papers to Father Sophrony. On his instructions, Father Sophrony left the monastery to live first at Karoulia, then at a cave near Saint Paul’s Monastery on Mount Athos.

The outbreak of World War II ushered in a time of intense prayer, so that Father Sophrony’s health deteriorated. During that time, he came to realise the interdependence of all humanity. He was ordained priest in 1941 and soon became a spiritual father to many Athonite monks. 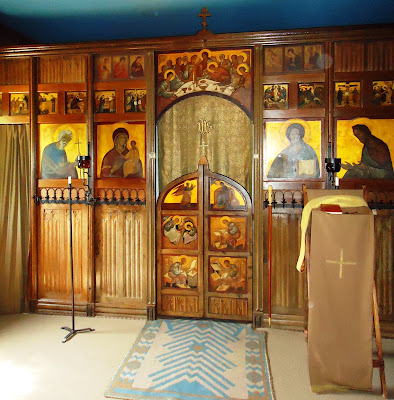 Inside the original monastic chapel in the former Rectory in Tolleshunt Knights (Photograph: Patrick Comerford)

With the end of World War II and the catastrophe that unfolded with the Greek Civil War, Father Sophrony found himself in a difficult quandary as a non-Greek on Mount Athos. Meanwhile, he had not realised his promise and hope to publish Saint Silouan’s works. He left Mount Athos in 1947 and returned to Paris.

In Paris, he moved into a Russian old people’s home in St Genevieve-des-Bois, where he became an assistant chaplain and father confessor, but also had a major operation on a stomach ulcer.

He produced his first mimeographed edition of Staretz Silouan in 1948. He outlined Saint Silouan’s principles of theology, explaining many of his concepts, including prayer for the whole world, God-forsakenness and the idea of all humanity being connected.

In Paris, he also worked from 1950 to 1957 with Vladimir Lossky, who influenced his thinking on many contemporary issues, and his Trinitarian thought and its application to the Church and humanity.

In 1952, Saint Sophrony produced a second edition of Staretz Silouan, which brought Saint Silouan to attention of a wider Orthodox public.

Meanwhile, Saint Sophrony had gathered around him a small people who wanted to explore living the monastic life. With the help of Rosemary Edmunds, they bought the Old Rectory at Tolleshunt Knights, near Maldon in Essex in 1958. Within a year, the Community of Saint John the Baptist had been formed at Tolleshunt Knights.

From the beginning, this was a mixed community, and the first six members were both monks and nuns. The Monastery of Saint John the Baptist was placed under the authority of the Ecumenical Patriarchate in 1965 and it later became a Patriarchal Stavropegic monastery.

The Ecumenical Patriarchate raised Saint Silouan the Athonite to the standing of a saint in 1987.

Meanwhile, the local authorities in Essex informed the members of the monastery community in Tolleshunt Knights that the only way they could bury their dead on their property was to build an underground crypt.

The community building a crypt, and Saint Sophrony said that he would not die until the crypt was ready. When he was told that the crypt would be completed on 12 July 1993, Saint Sophrony let them know he ‘would be ready.’

Saint Sophrony died on11 July 1993, and he was buried on the new crypt on 14 July 1993. On Prayer, a book containing Father Sophrony’s writings on prayer – particularly the Jesus Prayer – was published posthumously.

Mother Elizabeth, the eldest nun on the community in Tolleshunt Knights, died soon after, on 24 July 1993 – Father Sophrony had once said that he would die first, and that she would die soon after.

At the time of their deaths, the monastic community in Saint John’s had grown from six to 25 members. Today, the community has about 40 members from 13 or 14 nations.

Earlier this summer, the community elected Father Peter (Vryzas) as the new abbot, following the retirement of Archimandrite Kyrill. Father Peter is a disciple of Elder Zacharias (Zacharou), who was himself a close disciple of Saint Sophrony. The new abbot was born in Greece in 1977. He joined the monastery in 2002 at the age of 25. His PhD, on the mystery of receiving and transmitting the word of God in the teachings of Saint Sophrony, was recently published as his first book.