Saint Mary’s Cathedral,
Elphin: abandoned
after a storm in 1957 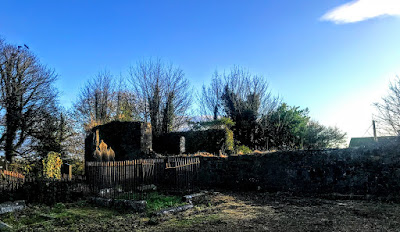 Saint Mary’s Cathedral was the cathedral of the Church of Ireland Diocese of Elphin until it was abandoned in 1957 (Photograph: Patrick Comerford, 2019)

The two cathedrals in Sligo – Roman Catholic and Church of Ireland – serve the dioceses of Elphin. So, it seemed appropriate on my way back from Sligo earlier this week after a family wedding at the weekend that I should stop in the small village of Elphin and visit the ruins of the former cathedral in the small south Co Roscommon village.

Elphin is 18 km from Boyle, 29 km from Roscommon and 14 km from Carrick-on-Shannon. But Elphin (Ail Fionn, ‘the stone of the clear water’) is a quiet place, on no main routes, set in some rolling pastureland.

Tradition says that the site of the former cathedral in Elphin dates back to a monastic house founded by Saint Patrick ca 435-450. Ono son of Oengus gave Elphin to Saint Patrick and Oisin is said to have been baptised near the town.

Saint Patrick is said to have placed his disciple Saint Assicus in charge of Elphin. A pre-historic standing stone and Saint Patrick’s Well are both situated within the Fair Green which forms part of the entrance to the cathedral site. 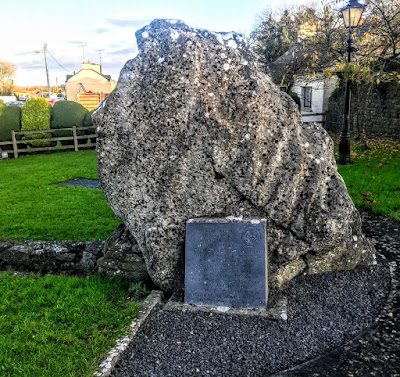 A standing stone and Saint Patrick’s Well at the entrance to the cathedral site (Photograph: Patrick Comerford, 2019)

Saint Assicus is said to have been succeeded by his nephew, Bite (Baethus), but there is no further record of the monastery until the 12th century. The Diocese of Elphin was established at the Synod of Rath Breasail in 1111, when the see for east Connacht was moved from Roscommon to Elphin and Domnall mac Flannacáin Ua Dubthaig become the first Bishop of Elphin.

Máel Ísu Ua Connachtáin was present at the Synod of Kells in 1152 as Bishop of Elphin.

The first cathedral was dedicated to Beatae Mariae Virgini (the Blessed Virgin Mary or Saint Mary the Virgin). It is referred to in 1235, when it was destroyed by fire. It was restored and rebuilt ca 1240. 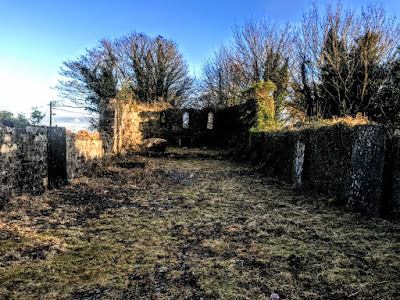 Some mediaeval Bishops of Elphin found it difficult to assert their authority. Máel Sechlainn Ó Conchobair, also known as Milo O’Connor was Archdeacon of Clonmacnoise when he was elected Bishop of Elphin by the majority of the Chapter of Elphin in 1260. He received possession of the diocese on 8 November 1260, and was consecrated bishop later that month. But he was opposed by Tomas mac Fergail Mac Diarmata until he died in office on 9 January 1262.

Tomas mac Fergail Mac Diarmata, a Cistercian monk also known as Thomas Mac Ferrall McDermott, had been elected bishop before 26 January 1260 by the Dean of Elphin and other members of the cathedral chapter, but was not able to take possession of the see. He successfully appealed to the Pope, but did not take possession until Bishop Máel Sechlainn Ó Conchobair died in 1262. He died in office in 1265.

Thomas Barrett, Archdeacon of Annaghdown, became Bishop of Elphin in 1372. He was deprived by the Antipope, Pope Clement VII, in 1383, in favour of Seoán Ó Mocháin, but to no effect, and Barrett continued in office until he died in 1404.

Robert Fosten became bishop in 1418, but spent most of his time in England acting as a suffragan bishop in Durham. 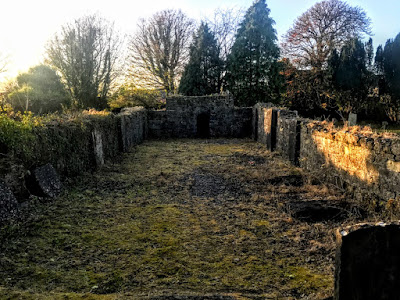 In 1433, Pope Eugene IV ‘granted certain privileges to contributors for the repair and fabric of the Cathedral Church of Elphin, dedicated to St Mary the Virgin, which had been greatly deformed by fire.’

Georgios Vranas, who became Bishop of Elphin in 1499, may be one of the few Greek-born bishops to serve the Church in Ireland. He was also known as Georgius de Brana, George Braua, or an-t-easbog Gréagach. He was from Athens and was a member of the famous Byzantine House of Vranas. He was translated from Dromore to Elphin in 1499, had resigned by 1507, and died in 1529. 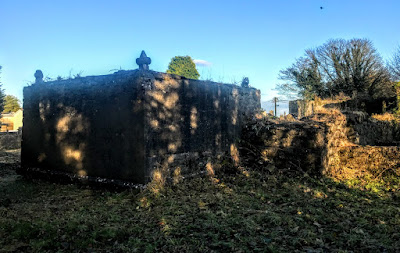 Elphin Cathedral was partially damaged in the 1641 rebellion, but was rebuilt by Bishop John Parker (1661-1667) after the Caroline Restoration.

The cathedral was substantially rebuilt in 1728, when the Bishop of Elphin was Theophilus Bolton (1724-1730), later Archbishop of Cashel and founder of the Bolton Library.

A new palace for the Church of Ireland bishops was built north of this site in 1749. The plan of a central block and flanking pavilions plan was very common in Irish country houses of the period.

Most of the cathedral roof had fallen in by 1757 and the walls were in a dangerous state. A thorough rebuilding was carried out in 1757-1758, when the tower was added. But it remained a modest building, no bigger than a small parish church, with a tall square clock tower at the west end. 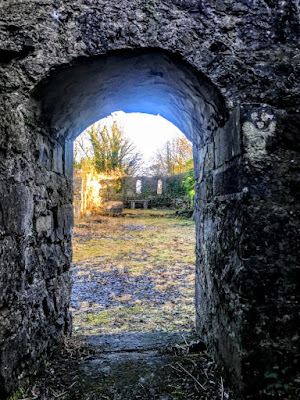 Looking into the cathedral ruins from the ruins of the tower (Photograph: Patrick Comerford, 2019)

When Dean Jonathan Swift visited Elphin briefly, he wrote about the town and cathedral:

While John Powell Leslie was Bishop of Elphin of Kilmore (1819-1841), Elphin was united with Kilmore and Ardagh, and he died in office as Bishop of Kilmore, Elphin and Ardagh in 1854. 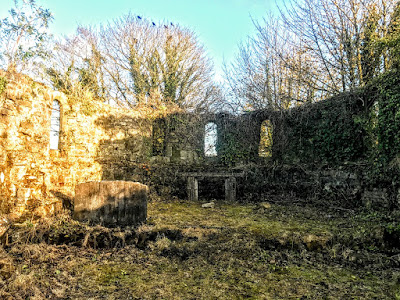 The apse was added to Elphin Cathedral in 1872 (Photograph: Patrick Comerford, 2019)

The final addition to the cathedral was a short apse of Caen stone, built in 1872. The cathedral was an oblong building, about 24.3 metres long, excluding the apse, and 8.5 metres wide. The bishops’ throne and chapter stalls were at the east end of the nave, there was a pulpit on the north side, a reading desk on the south side, a lectern and font.

Later, Elphin was the home town of the songwriter William Percy French (1854-1920). He is said to have written his first lines about a scene he witnessed when he was six-year-old. He saw a mouse come down a bell rope in the cathedral, and wrote:

The mouse for want of stairs,
ran down the rope to say his prayers.

The main block of the bishop’s house was destroyed by fire early in the 20th Century and was later demolished. The ruins of the pavilions survive together with the curtain walls that linked them to the main house. 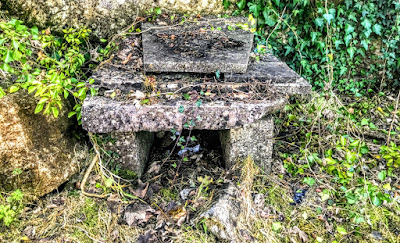 The supposed site of the bishop’s throne in the cathedral ruins (Photograph: Patrick Comerford, 2019)

Saint Mary’s continued in use as a cathedral until it was severely damaged in a storm on 4 February 1957. When the diocesan synod met in Longford a few months later on 11 July, it decided to abandon the cathedral and to move the seat of the Diocese of Elphin and Ardagh to Sligo.

The decision was ratified by the General Synod in 1958, and Elphin Cathedral was formally deconsecrated on 17 November 1958. Saint John’s Church, Sligo, formally became the Cathedral of Saint Mary the Virgin and Saint John the Baptist, serving the Diocese of Elphin and Ardagh, on 25 October 1961.

The cathedral ruins were mainly demolished in 1964, and many of the stones were used in building a new school in the village. The ruins were partly rebuilt and restored in 1982 and custody was transferred from the Church of Ireland to Roscommon County Council in 1985. It has since come into the custody of the Elphin Heritage Society. 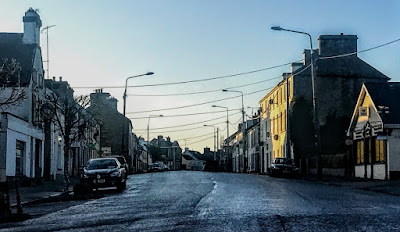