The Holocaust Memorial
in Vienna is not beautiful,
… ‘it must hurt’ 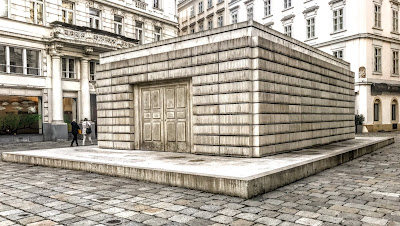 During my visit to Vienna last week, I particularly wanted to revisit Jewish Vienna.

I also visited the Stephansdom or Saint Stephen’s Cathedral, the Greek Orthodox Cathedral, the Peterskirche or Saint Peter’s Church, the Haas Haus and the Anker Clock. But I wanted to return to the principal sites of Jewish Vienna.

These include: the Jewish Museum at Palais Eskeles in Dorotheergasse; the Museum Judenplatz; the subterranean remains of a mediaeval synagogue; the Holocaust Memorial at Judenplatz; and the Jewish City Temple, the synagogue built in 1825-1826 by Josef Kornhäusel, the most eminent architect of the Vienna Biedermeier era.

Few European cities have a history so closely connected with Jewish history as Vienna. Stefan Zweig (1881-1942), the Austrian novelist, playwright, journalist and biographer who wrote repeatedly on Jews and Jewish themes in Vienna, declared shortly before his death: ‘Nine tenths of what the world celebrated as Viennese culture of the nineteenth century was a culture promoted, nurtured or in some cases even created by Viennese Jewry.’

This is the city of Theodor Herzl, Sigmund Freud, Viktor Frankl, Arnold Schönberg and Ludwig Wittgenstein. Gustav Mahler studied here too, and it is often forgotten that the Strauss family was of Jewish descent too.

Until 1938, Vienna had a flourishing Jewish community with dozens of synagogues and prayer houses.

But the prevalent anti-Semitism of the mid-20th century provided fertile grounds for the racism and terror of the Nazis, which started immediately after the German occupation of Austria in March 1938.

Any Jew who owned something, was robbed: through ‘Aryanisation,’ Jewish property was purloined by the state or sold off to non-Jewish people at low prices. About 140,000 Austrian Jews fled Austria, but 65,000 people who could not escape were murdered in the Holocaust.

Judenplatz is a singular place of remembrance, combining three important sites that together form a unique and integrated unit of remembrance: the excavations of a medieval synagogue; a museum dedicated to Vienna’s mediaeval Jewry; and Rachel Whiteread’s Holocaust Memorial.

Judenplatz was the centre of Jewish life in Vienna during the Middle Ages and the home to one of the largest synagogues in Europe. Important rabbincal leaders taught here until 1421, when the entire Jewish community was expelled or murdered.

Today, the central place of remembrance on Judenplatz is the Shoah memorial by the British artist and sculptor Dame Rachel Whiteread. The tiles set into the ground around the memorial bear the names of the places where Austrian Jews lost their lives during the Nazi period.

The Holocaust Memorial, also known as the Nameless Library, is the central memorial for the Austrian victims of the Holocaust. It began as an initiative by Simon Wiesenthal (1908-2005) after the controversy created in 1988 by Alfred Hrdlicka’s Mahnmal gegen Krieg und Faschismus in Albertinaplatz.

This new memorial was built by the city of Vienna under the Mayor, Michael Häupl, after Rachel Whiteread’s design was chosen unanimously by an international jury chaired by Hans Hollein (1934-2014), the architect of the Haas-Haus.

The original pan was to complete the monument on 9 November 1996, the 58th anniversary of Kristallnacht. But this was delayed by controversies and setbacks. Eventually, the memorial was unveiled on 25 October 2000, a day before the Austrian national holiday and five years before the Memorial to the Murdered Jews of Europeor Holocaust Memorial in Berlin.

The sculptor Dame Rachel Whiteread is an English artist who primarily produces sculptures, which typically take the form of casts. She was born in London in 1963 and is the first woman to win the Turner Prize (1993). She lives and works in a former synagogue in East London with long-term partner and fellow sculptor Marcus Taylor. 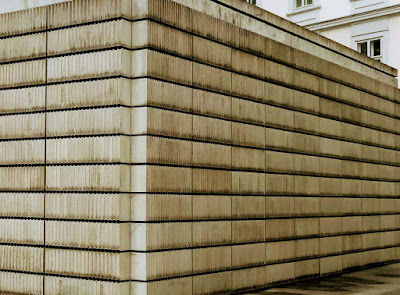 The memorial is a steel and concrete construction with a base measuring 10 metres by 7 meters and it is 3.8 metres high. The outside surfaces are cast library shelves turned inside out. The spines of the books face inward and are not visible, their titles unknown and their contents hidden.

The shelves of the memorial appear to hold endless copies of the same edition, which stand for the vast number of the victims, as well as the concept of Jews as ‘People of the Book.’

The double doors are cast with the panels inside out, with no doorknobs or handles. They suggest the possibility of coming and going, yet they do not open.

The memorial represents, in the style of Rachel Whiteread’s ‘empty spaces,’ a library whose books are shown on the outside but cannot be read. It also speaks of a cultural space of memory and loss created by the genocide of the European Jews.

Through the emphasis of void and negative casting rather than positive form and material, this monument is a ‘counter monument’ to the many monuments to grandiose and triumphal history.

As a work of art, the memorial is not intended to be beautiful and so it stands in stark contrasts to much of the Baroque art and architecture of Vienna. It is uncomfortable to look at, and so it evokes the tragedy and brutality of the Holocaust. At its unveiling, Simon Wiesenthal said, ‘This monument shouldn’t be beautiful. It must hurt.’

At the request of the artist, the memorial was not given an anti-graffiti coating. She explained: ‘If someone sprays a swastika on it we can try to scrub it off, but a few daubed swastikas would really make people think about what’s happening in their society.’

Although there are no texts on the cast books, two texts are engraved on the base of the memorial. On the concrete floor before the locked double doors is a text in German, Hebrew, and English, that points out the crime of the Holocaust and the estimated number of Austrian victims: ‘In commemoration of more than 65,000 Austrian Jews who were killed by the Nazis between 1938 and 1945.’

Judenplatz and the memorial are unique in Europe. The square unites the excavations of the mediaeval synagogue underground, that was burned down in the ‘Viennese Geserah’ of 1420, with the modern memorial above ground.

The foundations of the mediaeval synagogue, uncovered in 1995, are beneath the memorial and are accessible through the museum.

The names and dates of the 65,000 Austrian Jews murdered in the Holocaust, and the details of their persecution and murder, are presented in the museum at the Misrachi Haus on the Judenplatz.

A second, smaller memorial plaque by the entrance to the Misrachi-Haus reads: ‘Thanks and acknowledgment to the just among the people, who in the years of the Shoah risked their lives to help Jews, persecuted by the Nazi henchmen, to escape and survive. — The Austrian Jewish Community, Vienna, in the month of April 2001.’

The memorial plaque near the entrance to the Misrachi Haus on Judenplatz (Photograph: Patrick Comerford, 2019)

Thanks for your clear explanation of this memorial. You are doing a great service by enlightening your readers about different forms and places of worship. Julian Reynolds