Can conservation efforts
save the ruined church
at Castletown Conyers? 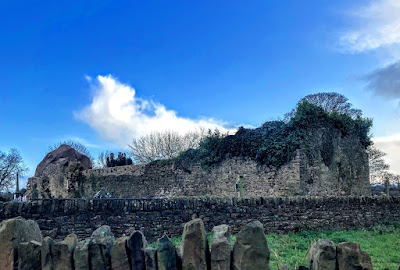 The church ruins in the graveyard at Castletown Conyers are all that survive of the mediaeval parish church of Corcomohide (Photograph: Patrick Comerford, 2019)

I was at a funeral earlier this week in Castletown Conyers, 5 km south of Ballingarry, on the road from Rathkeale to Charleville.

The church ruins at Castletown Conyers seen from the south-west (Photograph: Patrick Comerford, 2019)

Castletown or Corcomhide was the ancestral or tribal area of the Mac Eniry family, and was known as Baile Caisleáin Mhic an Oighre or the town of Mac Eniry’s castle. The Mac Eniry remained a force in this area until the late 17th century. 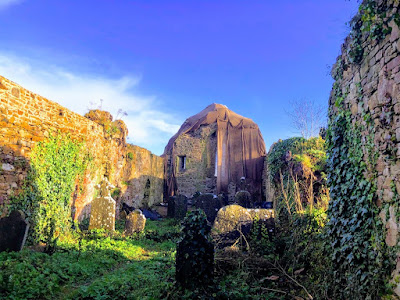 An inquisition of 1321 suggested that about 290 people were living there. Lewis suggests the Castle at Castletown was built by the chieftain of the Mac Eniry family in 1349, and says the Mac Eniry family founded an abbey.br />
There are a number of references to the castle during the 14th century, when it was held by the de Cliffords, amongst others. 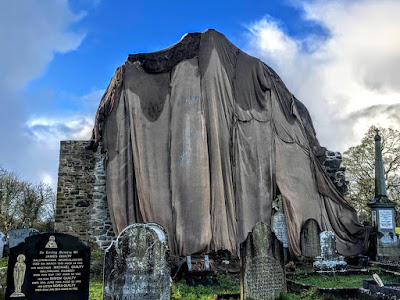 The east end of the church ruins at Castletown Conyers, shrouded in cladding (Photograph: Patrick Comerford, 2019) 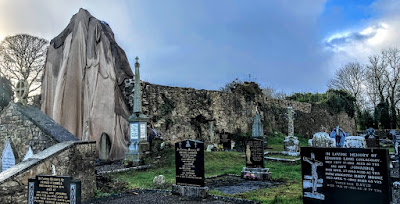 The church ruins at Castletown Conyers from the north-east (Photograph: Patrick Comerford, 2019) 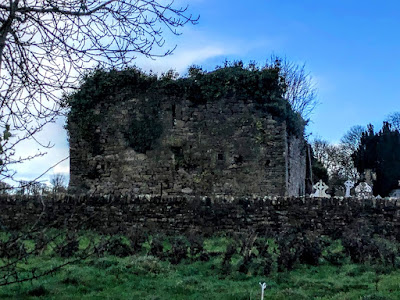 The Conyers vault was inserted in the west end of the church in the late 18th or early 19th century (Photograph: Patrick Comerford, 2019)

The Conyers vault was inserted in the west end of the church in the late 18th or early 19th century, although it is likely that the church was a ruin at this point.

Samuel Lewis in his Topographical Dictionary of Ireland in 1837, noted that Corcomohide was an ecclesiastical union, including the civil parishes of Castletown Conyers, Drumcolloher, and Kilmeedy, and had 10,742 inhabitants. 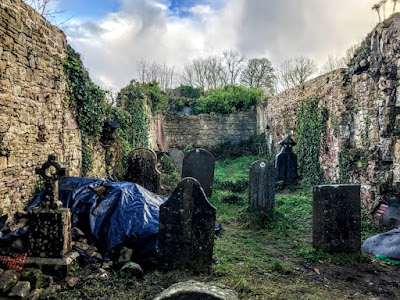 The church was certainly a ruin by the time of the first Ordnance Survey in the 1830s and 1840s (Photograph: Patrick Comerford, 2019)

Castletown Conyers, the seat of the Conyers family was the home of Charles Conyers (1758-1837) in the early 19th century, and he was succeeded by his son, the Revd Edward Fitzgerald Conyers (1787-1854). By the time of Griffith’s Valuation, the house was in use as an auxiliary workhouse, held by the Croom Guardians from Dr William Bailey, medical doctor, and valued at £25. 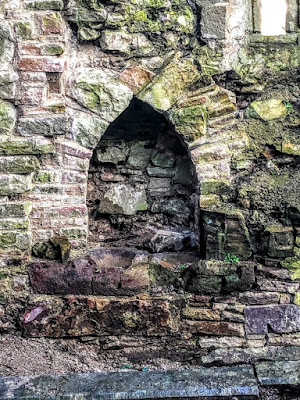 The remains of the piscina can be traced at the east end of the south wall (Photograph: Patrick Comerford, 2019)

Major Charles Conyers (1867-1915) of the Royal Munster Fusiliers was wounded at the Battle of Ypres in 1915 and is buried at Bradhoek Military Cemetery in Belgium. There is a memorial tablet with his name in Limerick Cathedral. The family Conyers family appears to have continued to live at Castletown Conyers until the 1920s.

Major Conyers had married Dorothea Blood-Smith (1869-1947) of Fedamore, Co Limerick, in Saint Mary’s Cathedral, Limerick, on 2 February 1892. She was the author of 54 novels and one autobiographical work of sporting reminiscences, published between 1900 and 1948. 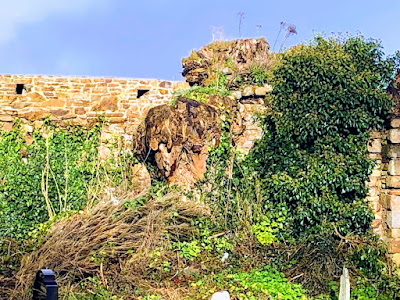 In places, the roots of trees and the ivy clinging to the walls appear to be the only things holding the fabric of the church together(Photograph: Patrick Comerford, 2019)

The first phase involves cutting back the trees and then drilling and treating the boles and roots. Later phases would involve repairing the cavities left by the roots, removing other vegetation, consolidating the south-east corner and north wall chancel and capping the walls. Some work on clearing the trees and ivy has been carried out under the direction of Ms McCutcheon and the north wall has been propped up. 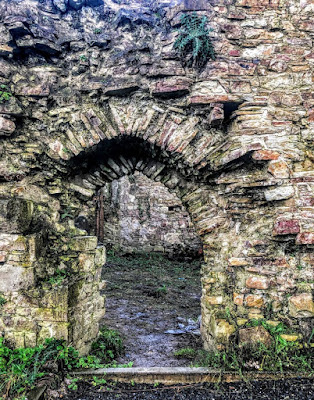 An opening at the east end of the north wall (Photograph: Patrick Comerford, 2019) 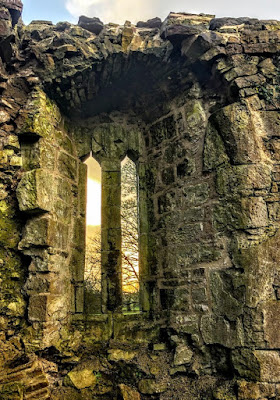