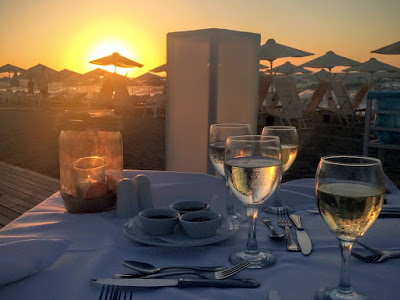 ‘Someone gave a great dinner and invited many’ … (Luke 14: 16) … waiting for dinner in Rethymnon in Crete (Photograph: Patrick Comerford)

1 On one occasion when Jesus was going to the house of a leader of the Pharisees to eat a meal on the sabbath, they were watching him closely. 2 Just then, in front of him, there was a man who had dropsy. 3 And Jesus asked the lawyers and Pharisees, ‘Is it lawful to cure people on the sabbath, or not?’ 4 But they were silent. So Jesus took him and healed him, and sent him away. 5 Then he said to them, ‘If one of you has a child or an ox that has fallen into a well, will you not immediately pull it out on a sabbath day?’ 6 And they could not reply to this.

12 He said also to the one who had invited him, ‘When you give a luncheon or a dinner, do not invite your friends or your brothers or your relatives or rich neighbours, in case they may invite you in return, and you would be repaid. 13 But when you give a banquet, invite the poor, the crippled, the lame, and the blind. 14 And you will be blessed, because they cannot repay you, for you will be repaid at the resurrection of the righteous.’

25 Now large crowds were travelling with him; and he turned and said to them, 26 ‘Whoever comes to me and does not hate father and mother, wife and children, brothers and sisters, yes, and even life itself, cannot be my disciple. 27 Whoever does not carry the cross and follow me cannot be my disciple. 28 For which of you, intending to build a tower, does not first sit down and estimate the cost, to see whether he has enough to complete it? 29 Otherwise, when he has laid a foundation and is not able to finish, all who see it will begin to ridicule him, 30 saying, “This fellow began to build and was not able to finish.” 31 Or what king, going out to wage war against another king, will not sit down first and consider whether he is able with ten thousand to oppose the one who comes against him with twenty thousand? 32 If he cannot, then, while the other is still far away, he sends a delegation and asks for the terms of peace. 33 So therefore, none of you can become my disciple if you do not give up all your possessions.

34 ‘Salt is good; but if salt has lost its taste, how can its saltiness be restored? 35 It is fit neither for the soil nor for the manure heap; they throw it away. Let anyone with ears to hear listen!’

A prayer today (Saint John of the Cross) from the Prayer Diary of the Anglican mission agency USPG, United Society Partners in the Gospel:

Let us give thanks for the spiritual insights of mystic and poets such as Saint John of the Cross. 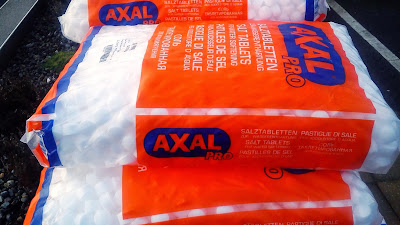 ‘Salt is good; but if salt has lost its taste, how can its saltiness be restored?’ … (Luke 14: 34) … bags of salt tablets outside the Ice House Hotel in Ballina, Co Mayo (Photograph: Patrick Comerford)

I never understand verse 26 where he says you must hate your relatives, I suppose he means you must love God more than the relationship you have with your family? I guess that is why so many decide to remain celibate. Difficult to understand the use of the word “hate” in the context. Perhaps the original translation made more sense in Greek.