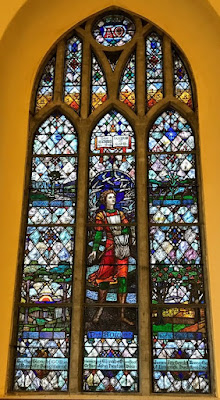 9 Then his disciples asked him what this parable meant. 10 He said, ‘To you it has been given to know the secrets of the kingdom of God; but to others I speak in parables, so that

11 ‘Now the parable is this: The seed is the word of God. 12 The ones on the path are those who have heard; then the devil comes and takes away the word from their hearts, so that they may not believe and be saved. 13 The ones on the rock are those who, when they hear the word, receive it with joy. But these have no root; they believe only for a while and in a time of testing fall away. 14 As for what fell among the thorns, these are the ones who hear; but as they go on their way, they are choked by the cares and riches and pleasures of life, and their fruit does not mature. 15 But as for that in the good soil, these are the ones who, when they hear the word, hold it fast in an honest and good heart, and bear fruit with patient endurance.

16 ‘No one after lighting a lamp hides it under a jar, or puts it under a bed, but puts it on a lampstand, so that those who enter may see the light. 17 For nothing is hidden that will not be disclosed, nor is anything secret that will not become known and come to light. 18 Then pay attention to how you listen; for to those who have, more will be given; and from those who do not have, even what they seem to have will be taken away.’

19 Then his mother and his brothers came to him, but they could not reach him because of the crowd. 20 And he was told, ‘Your mother and your brothers are standing outside, wanting to see you.’ 21 But he said to them, ‘My mother and my brothers are those who hear the word of God and do it.’

40 Now when Jesus returned, the crowd welcomed him, for they were all waiting for him. 41 Just then there came a man named Jairus, a leader of the synagogue. He fell at Jesus’ feet and begged him to come to his house, 42 for he had an only daughter, about twelve years old, who was dying.

As he went, the crowds pressed in on him. 43 Now there was a woman who had been suffering from haemorrhages for twelve years; and though she had spent all she had on physicians, no one could cure her. 44 She came up behind him and touched the fringe of his clothes, and immediately her haemorrhage stopped. 45 Then Jesus asked, ‘Who touched me?’ When all denied it, Peter said, ‘Master, the crowds surround you and press in on you.’ 46 But Jesus said, ‘Someone touched me; for I noticed that power had gone out from me.’ 47 When the woman saw that she could not remain hidden, she came trembling; and falling down before him, she declared in the presence of all the people why she had touched him, and how she had been immediately healed. 48 He said to her, ‘Daughter, your faith has made you well; go in peace.’

49 While he was still speaking, someone came from the leader’s house to say, ‘Your daughter is dead; do not trouble the teacher any longer.’ 50 When Jesus heard this, he replied, ‘Do not fear. Only believe, and she will be saved.’ 51 When he came to the house, he did not allow anyone to enter with him, except Peter, John, and James, and the child’s father and mother. 52 They were all weeping and wailing for her; but he said, ‘Do not weep; for she is not dead but sleeping.’ 53 And they laughed at him, knowing that she was dead. 54 But he took her by the hand and called out, ‘Child, get up!’ 55 Her spirit returned, and she got up at once. Then he directed them to give her something to eat. 56 Her parents were astounded; but he ordered them to tell no one what had happened.

A prayer today (Advent 2) from the Prayer Diary of the Anglican mission agency USPG, United Society Partners in the Gospel:

Merciful Lord,
you have taught us to bring life in totality to your people.
Grant us the wisdom and passion to work for the poor,
that they may encounter you
and have life in abundance,
through Jesus Christ our Lord. Amen. 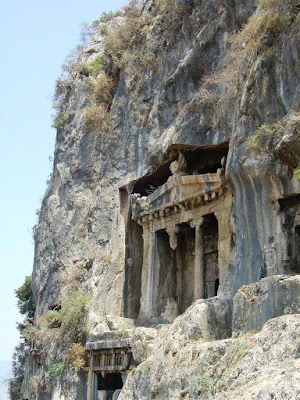 ‘For a long time … he did not live in a house but in the tombs’ (Luke 8: 27) … Lycian rock tombs in Fethiye in south-west Turkey (Photograph: Patrick Comerford)