How can we compare
Santa with the Prophets
and Saint John the Baptist? 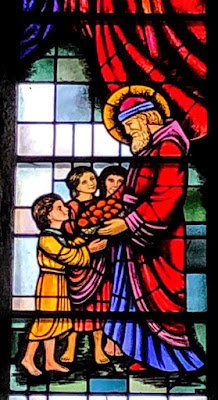 ‘In those days John the Baptist appeared in the wilderness of Judea’ (Matthew 3: 1) … a mosaic in Saint John’s Monastery, Tolleshunt Knights, shows Saint John the Baptist with his parents Saint Zechariah and Saint Elizabeth (Photograph: Patrick Comerford)

In this season of Advent, we are preparing for the coming of Christ, not just the Christ Child in the crib, but Christ the challenging king, Christ at his second coming.

This morning, as we light the second candle on the Advent Wreath, we think of the prophets and kings who prepared the way for the coming of Christ.

In the Old Testament reading, the Prophet Isaiah looks to the coming Messiah, ushering in a kingdom in which the wolf shall live with the lamb, the calf with the lion, ‘and a little child shall lead them’ – a Messianic image that has inspired poets, painters and hymn writers.

The psalm prays that the coming king may bring righteousness and justice, defend the poor, crush the oppressor, so the earth will be blessed with prosperity, justice and peace.
In our epistle reading, Saint Paul urges us to welcome one another, just as Christ has welcomed us in fulfilment of the promises to the Patriarchs and Prophets of old. He asks that God may fill us with joy, peace and hope.

In our Gospel reading (Matthew 3: 1-12), Saint John the Baptist is described in words from the Prophet Isaiah as ‘the voice … crying out in the wilderness’ (verse 3).

Saint John the Baptist is compared with the Old Testament prophets, particularly Isaiah and Elijah, and he emphasises the coming of the Kingdom of heaven (βασιλεία τῶν οὐρανῶν, basileía tou ouranou, see verse 2). When God’s kingdom comes, his will indeed shall be done on earth as in heaven, and justice shall be firmly and truly established.

Advent is our time to prepare for the coming of those days.

As Saint John the Baptist prepares the people for the coming of the Kingdom, he may be trying to shock the Pharisees and Sadducees out of their false sense of security, and into spiritual awareness by using strong language: ‘You brood of vipers! Who warned you to flee from the wrath to come?’

If Saint John the Baptist is drawing up a list before the coming of Christ, there is no doubt that he knows who’s naughty and who’s nice.

With his long beard and his unusual clothing, his rare appearance, his cajoling and cautioning, could we compare Saint John with Saint Nicholas, with Santa Claus?

Now, I know Saint John is not handing out gifts, moving around with haste before the arrival of Christ – but is there a way in which Santa Claus also prepares us for the coming of Christ? A way he teaches us some truths about who Christ truly is?

The feast day of Saint Nicholas does not fall on Christmas Day, or even on Christmas Eve. His feast day was on Friday, on 6 December, even if he does not make an appearance in the Calendar of the Church of Ireland.

Saint Nicholas was such a favourite saint in mediaeval Ireland that many of our principal ports and towns have large churches named after him, including one in mediaeval Limerick, on Nicholas Street, close to Saint Mary’s Cathedral.

He is an important figure, not because of the roly-poly figure used by Coca-Cola and advertising.

Saint Nicholas, whose name means ‘Victory of the People,’ was born in Myra in Lycia, now known as Demre, near Antalya on the south coast of present-day Turkey. He had a reputation as a secret giver of gifts, such as putting coins in the shoes of poor children, so you can see his links with our Santa Claus today.

Legend says young Nicholas was sent to Alexandria as a student. On the voyage, it is said, he saved the life of a sailor who fell from the ship’s rigging. In one version, on their arrival back in Myra, Nicholas took the sailor to church. The previous Bishop of Myra had just died, and the freshly-returned, heroic Nicholas was elected his successor.

Another story tells how during a famine, a butcher lured three small children into his house, slaughtered and butchered them, and put their bodies in a pork barrel to sell as meat pies. Saint Nicholas, who heard of the horrific plans, brought the three boys back to life through his prayers.

The best-known story tells how a poor man had three daughters but could not afford proper dowries for them. They would either remain unmarried or become victims of the trade in women and people trafficking. Saint Nicholas secretly went to their house at night and threw three purses filled with gold, one for each daughter, through the window – or down the chimney.

In 1863, the cartoonist Thomas Nast began a series of drawings in Harper’s Weekly, based on the descriptions in Washington Irving’s fiction and Clement Clarke Moore’s poem, ‘A Visit from Saint Nicholas’ or ‘The Night Before Christmas.’ His drawings gave us a rotund Santa with flowing beard, fur garments, and a clay pipe, and the saint’s name shifted to Santa Claus – a phonetic alteration from the German Sankt Niklaus and the Dutch Sinterklaas.

Coca Cola, advertising and Hollywood later made Santa a commercial success, and the North American Santa Claus has since travelled around the world.

But for me, Santa Claus, Saint Nicholas, remains the protector of children, the giver of gifts that make this a good world for children to live in. As the free-giver of gifts, without expecting anything in return, he is a reminder that God’s love is given freely and unconditionally at the Incarnation in his Son, Christ Jesus.

As the defender of the doctrine that Christ is God Incarnate, Saint Nicholas makes Christmas more than the birth of another prophet or someone who was important in history, and gives meaning to our celebrations of Christmas.

The stories of bringing the victims of murder back to life are reminders that Christmas is without meaning unless we connect it with Good Friday and Easter Day, that the significance of the Incarnation is found in our Redemption and the Resurrection.

If Santa gives good gifts at Christmas, then he prepares, he makes way, for the gift of love that God gives to us, all of us, freely, in the gift of Christ, the best of all gifts.

Enjoy the anticipation and the excitement.

Enjoy the gifts – giving and receiving.

And prepare for the greatest gift of all. 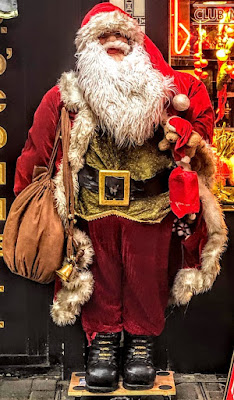 How was Saint Nicholas transformed into the modern Santa Claus? … a scene in Little Catherine Street, Limerick (Photograph: Patrick Comerford, 2019)

1 In those days John the Baptist appeared in the wilderness of Judea, proclaiming, 2 ‘Repent, for the kingdom of heaven has come near.’ 3 This is the one of whom the prophet Isaiah spoke when he said,

‘The voice of one crying out in the wilderness:
“Prepare the way of the Lord,
make his paths straight”.’

An icon of Saint Nicholas, celebrated on 6 December, in a church in Crete (Photograph: Patrick Comerford) 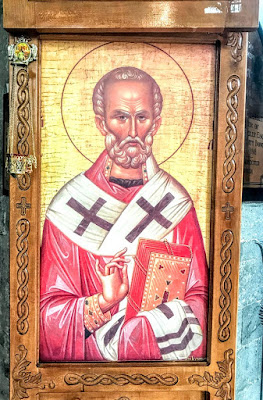 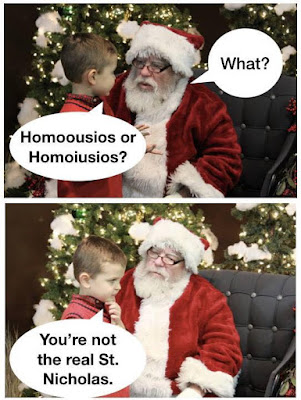