Did TA Cobden design
Saint Michael’s Church for
his friend in Portarlington?

Saint Michael’s Church, Portarlington, built in 1839-1842 and said to have been designed by the Carlow-based architect TA Cobden (Photograph: Patrick Comerford, 2019)

The English Church has been closed for almost a century and a half. But Portarlington has another Saint Michael’s Church, built at the west end of the town, on the Offaly side of Portarlington in 1839-1842, to serve the town’s Roman Catholic residents. 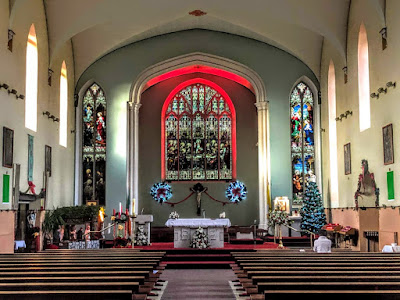 Saint Michael’s Church is unusual in its liturgical orientation: it is built on a north-south axis, rather than the traditional east-west axis. Its finely executed stonework articulates its Gothic Revival form, while its decorative features, including its windows, enliven an otherwise austere exterior.

The church has been attributed to the Carlow-based architect Thomas Alfred Cobden (1794-1842), perhaps on stylistic grounds but mainly because Father Terence O’Connell, the parish priest of Portarlington at the time Saint Michael’s Church was built had the administrator of Carlow Cathedral when it was built. 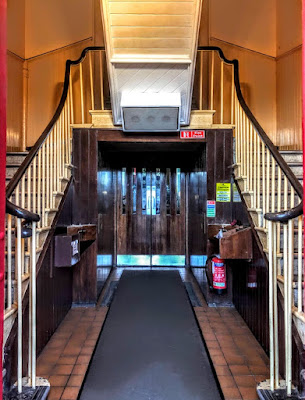 Cobden designed many public buildings, private houses and churches in Co Carlow, Co Wexford and Co Waterford, including the Cathedral of the Assumption in Carlow when Father Terence O’Connell was the Administrator, Saint Mary’s Church of Ireland parish church in Carlow, Saint Patrick’s College, Carlow, the Church of the Holy Cross in Killeshin, and the Presbyterian Church in Carlow, known locally as the Scots’ Church.

Cobden was a son of Thomas Cobden, a builder in Chichester, who built Chichester Market House with William Brooks in 1807. He was baptised on 8 July 1794 at an independent chapel in Chichester in 1794 and when he came to work in Ireland is still unknown.

He prepared designs for Gurteen le Poer, Co Waterford, for John William Power in 1814-1815, and drew up a classical scheme for Wells House, Co Wexford, for Robert Doyne, in 1819. Only his stables were built at Gurteen Le Poer, but he also designed the tower of Downpatrick Cathedral.

The rest of Cobden’s work in Ireland seems to have been in Co Carlow and Co Wexford. His clients included John Dawson Duckett, William Duckett, Robert Clayton Browne, General Robert Browne Clayton, Thomas Elrington, Bishop of Ferns, Robert Tottenham Ponsonby Loftus, Bishop of Clogher, and Father Terence O’Connell when he was in Carlow and Portarlington.

He worked for John Dawson Duckett on Duckett’s Grove, Co Carlow, and his other designs include Braganza Villa (1818-1823), built for Colonel Sir Dudley Hill (1790-1851), later the bishop’s house in Carlow and once the residence of Bishop Michael Comerford (1831-1895).

If Carlow Cathedral is Cobden’s great achievement in church architecture, then Duckett’s Grove is his most amazing work of domestic architecture. It was built around 1830 for William Duckett and is now in ruins. It is about 9 or 10 km from both Carlow and Tullow and once stood at the centre of a 12,000 acre (49 sq km) estate.

Cobden, who was a Presbyterian, was ecumenical before his time in the scope of ecclesiastical commissions he accepted, and this is underlined in his friendship with Terence O’Connell. He lived in College Street, Carlow, but he returned to London by 1832 and died at the age of 48 in Hackney in 1842, the year Saint Michael’s Church in Portarlington was completed. 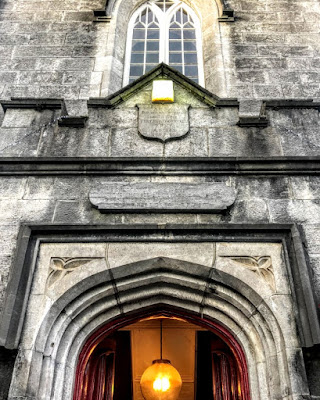 The stones used to build Saint Michael’s Church came from the bed of the canal being built between Portarlington and Monasterevin.

Father Terence O’Connell also built Saint Paul’s Church in Emo village, which stands on a site donated by Henry Dawson-Damer, 3rd Earl of Portarlington, of Emo Court. He donated the site to the parish in 1861, and O’Connell commissioned the Dublin-based architect John Sterling Butler (1816-1885) to design the church in Emo.

O’Connell also built the church in Killenard and brought the Presentation Nuns (1854) and the Christian Brothers (1863) to Portarlington.

A plaque at the porch commemorates Terence O’Connell. When he died in 1875, he was buried in the church and the parish was divided, with Emo and Rath becoming a new parish. His successor as parish priest, Hugh Mahon (1875-1889), was also buried in the church.

The architect Thomas Francis McNamara (1867-1947) was commissioned by Father Edward O’Leary to extended Saint Michael’s Church by 20 ft in 1912-1915. He extended the interior sanctuary and nave, and added a chancel, side chapels, nuns’ choir, the sacristies and the baptistry. 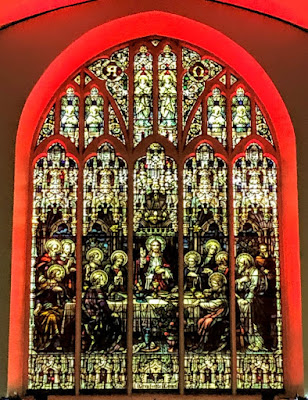 The East Window in Saint Michael’s Church in the work of Daniel & Frucker (Photograph: Patrick Comerford, 2019)

McNamara was a pupil in the office of William Hague and later became Hague’s managing assistant. After Hague died in 1899, he formed a business partnership with Hague’s widow, practising as Hague and McNamara until about 1907, before practising under his own name. He completed much of Hague’s work, including Saint Eunan’s Cathedral in Letterkenny, Co Donegal, and the tower and spire at Saint Patrick’s College, Maynooth.

Like Hague, McNamara received many church commissions. He travelled frequently in France, Italy and Spain, and had a particular interest in Hispano-Romanesque architecture. He also designed a large number of cinemas throughout Ireland. His pupils and assistants included the stained-glass artist Harry Clarke. 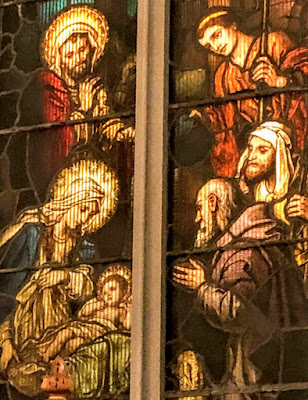 A Nativity scene in a window in Saint Michael’s Church (Photograph: Patrick Comerford, 2019)

Saint Michael’s has a seven-bay nave with chancel, flat-roofed side chapel and sacristy to north. Inside, the nave has a vaulted ceiling and there is a Tudor chancel arch, and a gallery to the rear, and there are interesting stained-glass windows.

The church has a four-stage castellated tower with pinnacles and a stone cross. At the sides there are castellated single-bay, single-storey projections. The tower has a clock and louvered windows, and there are lucarnes to the spire.

The pointed-arched window have with hood-mouldings, chamfered limestone surrounds and timber Y-tracery windows, and there are timber battened doors.

The large East Window above the high altar, depicting the Last Supper, is the work of Daniel & Frucker. 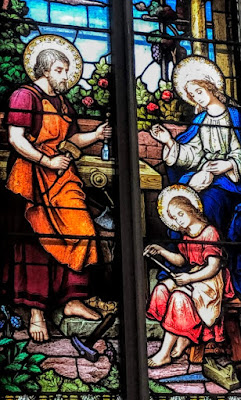 There are two stone plaques above the entrance. One reads, ‘AMDG Ecclesia Sancti Michaelis Erected by the Very Rev T O’Connell PP VF AD 1842.’ The other reads, ‘In 1915 this church was lengthened by 20 feet and the chancel, chapels, nuns’ choir, sacristies and baptistery were added by V Rev E O’Leary PP VF.’

A third plaque at the side reads, ‘The Christian Brothers served this parish of Portarlington and surrounding area from 1863-1995 buíochas le Dia as ucht a saothair.’ 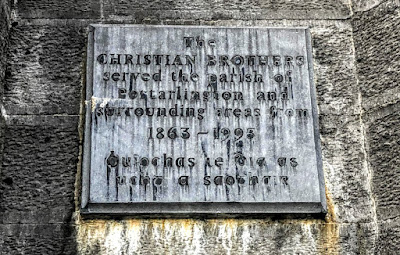 A plaque commemorating the work of the Christian Brothers in Portarlington (Photograph: Patrick Comerford, 2019)

The architect Wilfrid Cantwell (1921-2000) refurbished Saint Michael’s in 1971 in line with the liturgical reforms introduced by Vatican II.

Wilfrid Cantwell graduated from the School of Architecture, UCD, with his BArch degree in 1944, and was elected a member of the RIAI in 1946. He was President of RIAI in 1966 and 1967. He worked with Michael Scott, alongside Kevin Roche, Kevin Fox and Robin Walker, and worked on Bus Arús. He later worked with JN Kidney before setting up his own practice (1947-1975), where he attained distinction in the area of church architecture, particularly in years immediately after Vatican II.

His two major religious buildings are the Synagogue on Rathfarnham Road in Terenure, Dublin, and the Church of the Holy Spirit, Ballycullane, Co Wexford, in 1971. His favourite church project was the renovation of the Pugin Chapel in Ushaw College, Durham. He was the co-author with Richard Hurley of Contemporary Irish Church Architecture (1985).

Cantwell specialised as a consultant in church design and in the legal aspects of building from 1976. He retired in 1993 and died on 26 December 2000.

Saint Michael’s Church is part of a cluster of religious buildings, with the adjacent convent and school. It stands in a churchyard with a collection of statues and bounded by ashlar gate piers with cast-iron gates and railings. With its imposing tower, Saint Michael’s remains an important social building in Portarlington. 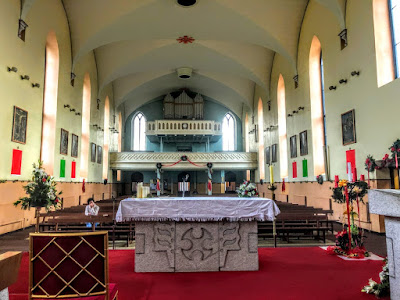