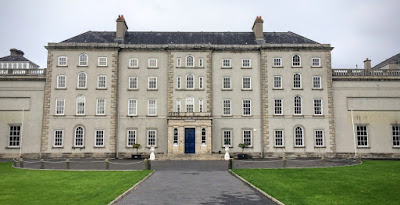 Carlow College, otherwise known as Saint Patrick’s College, is one of the architectural gems in Carlow (Photograph: Patrick Comerford, 2016)

One of the architectural gems of Carlow, but one that is not often appreciated, is Carlow College, otherwise known as Saint Patrick’s College. This is Ireland’s oldest third-level Catholic College and it was founded in 1782 and opened in October 1793 following the Gardner Relief Act and the relaxation of the Penal Laws restricting Catholic education.

Dr James Keeffe, Bishop of Kildare and Leighlin, and his successor, Bishop Daniel Delany, were the driving forces behind the foundation of the new college, which was built on Winnet’s Field. The aim of the college was to educate boys for the professions and for the priesthood.

The earliest part of the building is the large central block, which is nearly 37 metres long. An extension was soon needed and a new building plan was initiated in 1817 with the Carlow-based Thomas Alfred Cobden (1794-1842) as the architect.

Thomas Cobden, a young English-born architect, was then in his mid-20s. He also designed the Roman Catholic Cathedral of the Assumption, Saint Mary’s Church of Ireland parish church, the Scots’ Church or Presbyterian Church in Carlow, and Braganza Villa, which later became the official residence of the Roman Catholic bishops of Kildare and Leighlin.

Cobden was born in Chichester, and had moved to Ireland by 1814 or 1815, when he prepared designs for Gurteen le Poer, Co Waterford, for John William Power. Most of his Irish commissions were in Co Carlow and Co Wexford, and they included Duckett’s Grove, Co Carlow. He lived for some time in College Street, Carlow, close to Saint Patrick’s College. But he had returned to London by 1832 and died in Hackney in 1842 at the age of 48.

The south wing (to the right when facing the college) was added in 1819 and was connected to the existing college by a two-storey link building. The main north wing was built between 1821 and 1835 on a much grander scale.

The front façade is very different from the original building but the use of circular headed windows creates a sense of unity. It contains a very fine cantilevered granite staircase leading up from a granite paved entrance hall. A large hall with semi-circular apse, once the college chapel, is now named the Cobden Hall and is used for college and public events.

The college entrance gate and gate lodge, built in 1832, were almost certainly designed by Cobden too. The lodge is a small two-roomed building with a doorway under a classical pediment and flanked by two Greek Doric columns.

Bishop Michael Comerford (1830-1895), who was born around the corner in Brown Street, close to the entrance to the college, received his seminary education at Saint Patrick’s College. He finished his theological studies in 1855, but his ordination was delayed because of the death of Bishop Francis Haly. He was not ordained until May 1856 by the newly-consecrated Dr James Walshe.

A new wing at the south end, connected to the old building by a closed cloister intended to serve as play hall, was designed by William Hague. The foundation stone was laid in summer of 1879.

The chapel of the Sacred Heart, built in the Hiberno-Romanesque style, is also interesting. It was built to mark the centenary of the college and now functions as the College Library. An exhibition on the history of the college is on display in the corridor leading into the Library.

To mark the bicentenary of the opening of Carlow College, an exact replica of the plain uninscribed high cross from nearby Sleaty was erected in the grounds. Immediately opposite is a modern work entitled Sun Stone. This is by the German artist Paul Scheidner and it is aligned with the sun at the summer solstice.

Between 1793 and 2001, over 3,300 students from Carlow College were ordained priests and have served all over the world. The college has also educated generations of politicians, poets and leaders. Among the famous alumni was Paul Cullen, Ireland’s first cardinal.

Lecture rooms in the college are named after other famous alumni: The John England Room is named after the first Bishop of Charleston in the US (1820-42); and the Therry Room commemorates a pioneer of the Roman Catholic in Australia. Famous lay alumni include the agrarian agitator and social activist, James Fintan Lalor, the Fenian John O’Leary, the poet Richard Dalton Williams, and the impressionist painter Frank O’Meara. 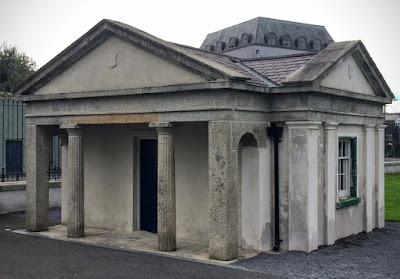