An elegant regency house
saved from ruin in Carlow 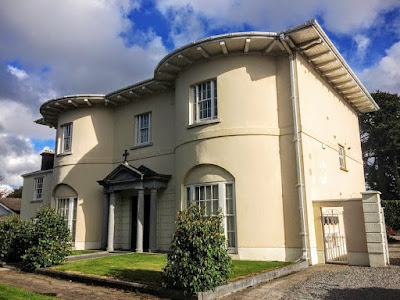 Braganza Villa, once the residence of the Bishops of Kildare and Leighlin and built by Thomas Cobden for Sir Dudley Hill (1790-1851) (Photograph: Patrick Comerford, 2016)

I spent Saturday afternoon [15 October 2016] in Carlow Town, strolling by the banks of the River Barrow, visiting the castle and the churches, and photographing some of the town’s elegant architecture dating from the late 18th and early 19th centuries, including Braganza Villa, dating from 1818-1823.

Braganza is hidden at the rear of a housing estate off Athy Road. This once elegant Regency mansion is one of Carlow’s oldest buildings and the former seat of the Bishops of Kildare and Leighlin. For six years the residence of Bishop Michael Comerford while he was coadjutor bishop of the diocese.

This beautifully designed mansion, looking down onto the banks of the River Barrow, was recently in danger of being reduced to a ruin. Braganza Villa was first built for Major-General Sir Dudley St Leger Hill (1790-1851), a Carlow-born army general and colonial governor. The house was designed by Thomas Cobden, the English-born architect, when he was only in his mid-20s. Hobden also designed the Roman Catholic Cathedral of the Assumption, Saint Mary’s Church of Ireland parish church, and the Scots’ Church or Presbyterian Church in Carlow.

Thomas Alfred Cobden (1794-1842) was born in Chichester, and had moved to Ireland by 1814 or 1815, when he prepared designs for Gurteen le Poer, Co Waterford, for John William Power. Most of his Irish commissions were in Co Carlow and Co Wexford, and included Duckett’s Grove, Co Carlow. He lived for some time in College Street, Carlow, but returned to London by 1832 and died in Hackney in 1842 at the age of 48.

Sir Dudley Hill was born in Carlow in 1790, the son of Dudley Hill of Dublin Street, Carlow. His ancestors are said to have come to Ireland a century earlier with the army of King William III. His grandfather, Edward Hill, married Catherine Colclough, a daughter of Henry Colclough of Kildavin, near Bunclody, and a cousin of Beauchamp Bagenal (1741-1802), MP for Enniscorthy and Carlow and remembered as a rake – he is said to have jilted Princess Charlotte, who later married King George III.

Hill joined the army at the age of 17 in 1804, when he was appointed an ensign in the 82nd Foot. A year later the transferred to the 95th Rifles.

As Lieutenant Hill, he was sent to South America in 1806, and during the Battle of Montevideo in 1807 he commanded the scaling party that captured the north gate of the city. He was wounded and taken prisoner in the subsequent attempt at Buenos Aires, when he fought under Colonel William Carr Beresford.

He was back in Portugal in 1809, when he took part in the Battle of Talavera and the operations on the Côa River. Later, he was appointed to the Portuguese army and had a commanding role both with the Loyal Lusitanian Legion at Battle of Bussaco in 1810, and at the Battle of Fuentes de Oñoro in 1811.

Hill later returned with the Portuguese army to Portugal, where he spent some years. He was knighted in Portugal in 1815 as a Knight of the Order of the Tower and Sword, and when he returned home he was knighted as a Knight Bachelor in 1816. 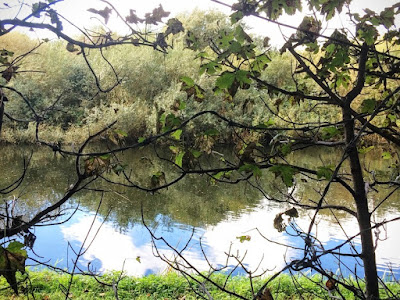 The banks of the River Barrow below Braganza in Carlow (Photograph: Patrick Comerford, 2016)

Around 1818, he began building the manor house of Braganza on the banks of the River Barow in Carlow. He named the house Braganza in honour of the Portuguese Royal Family, inspired by his long military career in Portugal.

In 1819, at Saint Marylebone in London, Hill married his first wife Caroline Drury Hunter (1799-1831), a daughter of Robert Hunter of Kew, Surrey, and his wife Charlotte (Hansford), and they had six children, some of whom were born in Carlow.

He had returned to Portugal once again by 1820 and by 1823, when he decided to sell Braganza, he was an army major.

But in 1834 he became a senior British colonial figure when he was appointed the Lieutenant-Governor of Saint Lucia, where he was involved in the emancipation of the slaves.

He returned home when he married a second time in 1838. His second wife Mary (Watkins) was the widow of Mark Davies, of Turnwood, Dorset. A year later, he was made Commander of the Order of Aviz in Portugal in 1839.

He was appointed a major-general in 1841, and, after spending time on the army staff in Ireland, he was appointed to a divisional command in Bengal in 1848, when he was made a Knight Commander of the Order of the Bath (KCB). He still held his colonial post in Indian when he died of apoplexy at Umballa in Bengal on 21 February 1851.

His grave in Ambala Cemetery bore the inscription: ‘Sacred to the memory of Major General Sir Dudley St. Leger Hill, KCB, Colonel of HM 50th Regt who died at Umballah while in command of the Sirhind division on the 21st February 1851.’ 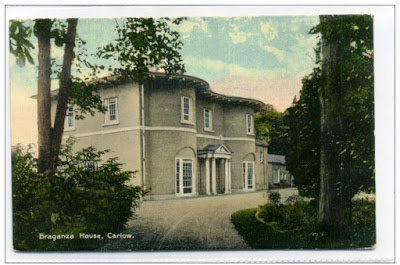 Braganza in its elegant days as the Bishop’s Palace

Braganza is said to have been modelled on Portuguese architecture. Cobden was probably commissioned to design the house in 1818, and building work began on Monday 26 August 1819. According to the local newspaper of the time, The Carlow Post, the first stone was laid by his mother and Hill and his wife then entertained a large party of 40 friends to ‘an elegant breakfast prepared for the occasion.’

But progress on building Braganza was slow, and three years later it still was not completed. Hill seems to have been frustrated by these delays, and in 1823 he offered the now-completed and fully-furnished Braganza Villa for sale along with six acres of lands.

In a tribute to Dr James Doyle (JKL), Roman Catholic Bishop of Kildare and Leighlin, the priests of his diocese launched a collection to buy the buy the house for their bishop and his successors. The organising committee decided to buy Braganza for £2,500. In 1826, Bishop Doyle left his house at Old Derrig and moved to live in Carlow.

From then, until the death of Bishop Thomas Kehoe in 1969, Braganza was the residence of the Bishops of Kildare and Leighlin, and was referred to as the ‘Bishop’s Palace. 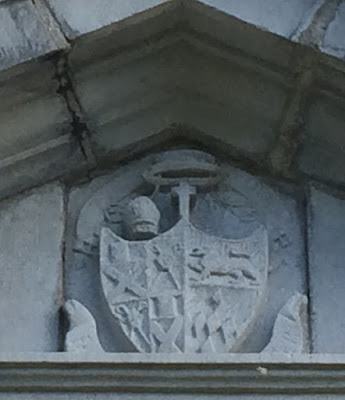 The episcopal arms on the portico of Braganza … they show the arms of the Diocese of Kildare and Leighlin on one side and on the other what may be a representation on the talbot and indented cross of the Comberford family (Photograph: Patrick Comerford, 2016)

Michael Comerford was born in 1831 in Tullow Street, Carlow. His father, James Comerford (1788-1859) of Clohamon and Newtownbarry (Bunclody), Co Wexford, moved from Bunclody to Carlow, and lived at 11 Brown Street, within walking distance of Carlow Cathedral and Saint Patrick’s College. He also owned property close to the then Methodist Church in Charlotte Street – named after the once jilted Queen Charlotte.

Michael Comerford was consecrated bishop on 1 January 1889 in Carlow Cathedral, which was also designed by Cobden. He died suddenly on 19 August 1895 without living to succeed as Bishop of Kildare and Leighlin. Following his death, there were vespers in Braganza, his residence, ‘and a magnificent demonstration of respect and of sympathy in the procession of religious confraternities through the town where all of the shops were closed and crape universally worn.’

His funeral rites ended with Matins and Lauds in the cathedral. He was buried in front of the High Altar in Carlow Cathedral, where the Flemish pulpit was erected in his memory. A plaque in Brown Street also commemorates his work as both a bishop and an historian.

When Dr Patrick Lennon became Bishop of Kildare and Leighlin in 1969, he decided to break with tradition and bought a house on Station Road. His official residence was later built on the grounds of the presbytery at Dublin Road. On 12 July 1972, Braganza Villa, standing on about seven acres of land, was sold at public auction.

A local construction company built 25 private houses on the site and Braganza, by then a listed building, was walled off, leaving only one entrance at the rear. For many years it was in danger of falling into ruins, but it has since been renovated and converted into apartments. 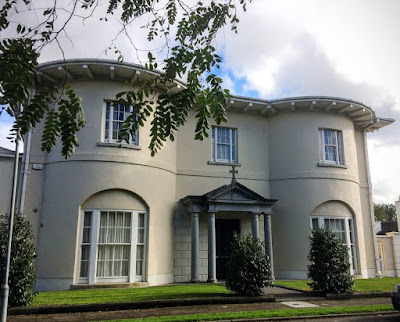 Braganza has been restored and converted into apartments (Photograph: Patrick Comerford, 2016)