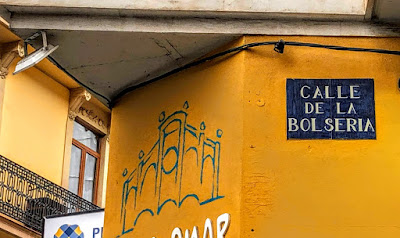 In the heart of Valencia, many of the first churches in the city were built in the 13th century on the site of former mosques, including the Cathedral, Santos Juanes and San Nicolás de Bari.

The Moorish town was conquered by King James of Aragon and his Christian armies in 1238, and 12 mosques were soon converted into or replaced by ‘royal parishes’ or ‘foundational parishes’ in Valencia.

The Boatella neighbourhood, once a working class area outside the town walls, housed some of the Morisco population, former Muslims and their descendants who were forced to convert to Christianity under threat of death after the open practice of Islam was outlawed.

The Moriscos were descendants of Spain’s Muslim population that had converted to Christianity by coercion or by royal decree in the early 16th century. The Moors who remained Muslims were known as Mudéjar. 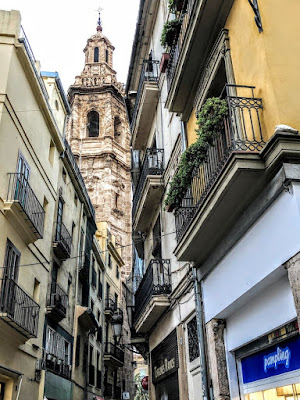 The bell tower of Santa Catalina Church is the rebuilt minaret of a mosque that stood on this site (Photograph: Patrick Comerford, 2020)

Santa Catalina Church in the heart of the old city is yet another example of a church that was turned into a mosque in the 13th century. Most of the interior was rebuilt after a fire in 1548, but the imposing bell tower, with an hexagonal base and five levels, was once the minaret, rebuilt in Baroque style in 1688-1705 to designs by Juan Bautista Viñes.

When Philip II issued a decree on 9 May 1609 expelling the Moors from Spain, some 300,000 Moriscos or Spaniards of Muslim descent or religion, were expelled from Spain. Between 1609 and 1614, the Crown systematically expelled Moriscos through a number of decrees.

In Valencia, Muslims made up the bulk of the peasantry and there was high ethnic tension with the Christian, Catalan-speaking middle class. At least 120,000 people were deported from Valencia to North Africa from the ports of Dénia, Alicante, Grao de Valencia, Moncófar and Vinaroz.

As a last insult, they were forced to pay their own fares. At times, small revolts broke out on the ships, and some exiles were slain by crew members. When they arrived in North Africa, Moriscos were at times attacked as invaders by local people.

In regions such as Alicante, the expulsions involved 90% of the population. Landowners found it difficult to find Christians to settle in vast, depopulated areas, to work on the land and in the fields, and to repopulate virtually abandoned villages. The expulsions brought about economic collapse and depopulation of much of the territory and was aggravated by the bubonic plague that hit Valencia only a few years later.

The majority of people expelled permanently finally settled in the Maghreb or on the Barbary coast. Between 30,000 to 75,000 people eventually returned to Spain, and those who avoided expulsion or who managed to return merged into the dominant culture.

By the end of the 18th century, indigenous Islam and Morisco identity were considered to have been extinguished in Spain. The Muslim minority in Valencia today comes from very different sources. 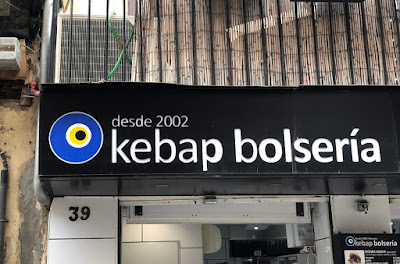 The Muslim presence in Valencia today has no connection with the Morisco and Mudéjar people of the past (Photograph: Patrick Comerford, 2020)

But another form of diversity is visible on the streets of Valencia today.

Every street in Valencia, it seems, has two names. I was staying in the Senator Parque Hotel on the edge of Russafa, an area where the streets are lined with restaurants, cafés and bars, and it is the ideal area to go for dinner in the evening.

But Russafa is also known as Ruzafa. And as I went in search of the former Morisco districts of Valencia, I found two street names on almost every corner: was I on Calle de la Bolseria or on Carrer de la Bosseria?

Valencia has two official languages: the majority of people speak Spanish, known as both Español and Castellano, which is also a compulsory language in schools; but many people prefer to speak Valenciano, a romance language that is virtually the same as Catalan, and constitutionally recognised as the regional language.

Studies show the several dialects of Valencian belong to the Western group of Catalan dialects, and there is a political debate in Valencia about whether Valenciano is a dialect or a separate language that is different from Catalan.

Valencian is regulated by the Acadèmia Valenciana de la Llengua, by means of the Castelló rules, which adapt the Catalan orthography to the Valencian idiosyncrasies. Because Valencian was not officially recognised for a long time, the number of speakers has dropped steadily, and the influence of Spanish has led to the adoption of a large number of loanwords.

There is a constant to and fro in naming streets, as councils change from party to party, and each insists on naming streets in Castellano or Valenciano, and sometimes the two names remain on a street corner or on facing sides of the same street.

In my search for stories of historical pluralism and diversity in the churches and on the streets of Valencia, the large Stars of David in the windows of both the Cathedral and the Church of San Nicolás de Bari also led me to ask what happened to the Jewish community of Valencia. But that’s another story for later. 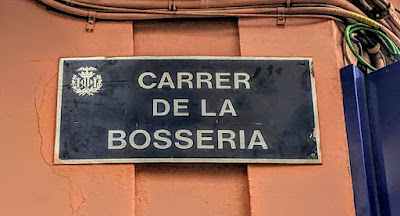