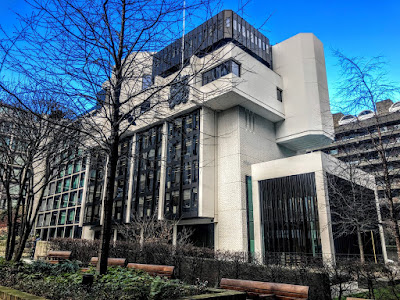 Salters’ Hall, designed by Sir Basil Spence, opened in 1976 … but its story dates back to 1394 and earlier (Photograph: Patrick Comerford, 2020)

During my visit to London earlier this week, I visited a number of synagogues, including Bevis Marks Synagogue, the former Fieldgate Street Synagogue and the former Brick Lane Synagogue, and a number of churches that I had not visited before.

One of the most unusual places I visited was Salters’ Hall at 4 London Wall Place, the successor to an earlier Salters’ Hall that was an unusual venue in the history of Puritan dissent and its divisions in the early 18th century. Today’s hall also has has an interesting link with Coventry Cathedral.

The Worshipful Company of Salters is one of the Livery Companies of the City of London, ninth in order of precedence. The company began as the Guild of Corpus Christi, which was granted a Royal Charter of incorporation in 1394.

By then, Bread Street in London was the home of many salt traders, replacing the original tenants who traded in bread and after whom the street was named. As trading in salt became more important in large cities and near ports where much salt was imported, these Salters began to group together to look after their own interests and welfare.

As well as living in the same street, the Salters also regularly attended the same church, the Parish Church of All Hallows, Bread Street. But there were many disputes between the Salters, and Richard II agreed the best way to stop these disturbances and bring revenue to the Treasury was to issue licences to all traders in the form of letters patent that included a set of rules bringing the traders back into line and limiting their power.

The king granted a licence for the foundation of the Fraternity and Guild of Corpus Christi in the Church of All Hallows, Bread Street, and to convey property to the Fraternity. At that time, the Fraternity was composed entirely of those who followed the trade of Salter, whether or not they lived within the parish.

Over the years, membership expanded to include other professions, and further charters granted the company the authority to set standards and regulations regarding the products of its members. 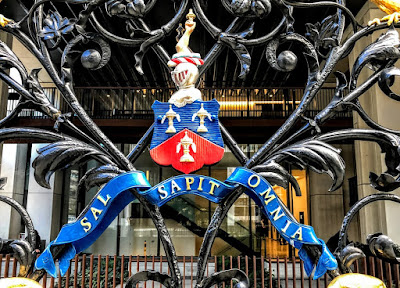 All Hallows’ Church in Bread Street served as the place of worship and central meeting place, where all the Salters gathered for business and entertainment until 1454, when the fraternity was bequeathed a plot of land by the Sheriff and Alderman, Thomas Beamond, on which the fraternity built ‘Saltershalle.’

The hall was used as the charitable headquarters, centre of administration, centre of supervision of apprentices and an estate office. A fire broke out in Saltershalle in 1533 but it was successfully put out. The hall was rebuilt after a second fire destroyed it in 1539 and then rebuilt again following another fire in 1598.

In the 16th century, the company was also granted a coat-of-arms in 1530, followed by a crest and supporters in 1591. The company’s motto in Latin is Sal Sapit Omnia, meaning ‘Salt Savours All.’

The hall on the original site was eventually too small for the increasing number of company members, and in 1641 a new hall was bought at London Stone in the Parish of Saint Swithin. This hall was burnt to the ground during the Great Fire of London in 1666, but was rebuilt in 1668. 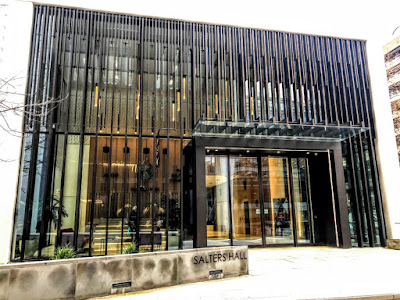 The entrance to today’s Salters’ Hall … its predecessor was the centre of Presbyterian debates and divisions in 1719 (Photograph: Patrick Comerford, 2020)

Salters’ Hall on Saint Swithin’s Lane became the meeting place of Presbyterians in the 1700s and in 1719 it was the site of the ‘Salters’ Hall controversy,’ which became a notable turning point in religious tolerance in England, and divided all the dissenting traditions that were the spiritual heirs of the Puritans of the Cromwellian era – Presbyterians, Congregationalists and Baptists.

The dispute arose in controversies over the ministry and teachings of the Revd James Peirce (1674-1726), a leading Presbyterian and dissenter. Peirce was the minister of James’s Meeting in Exeter when he was accused of holding Arian or Unitarian views and denying traditional teaching about the Trinity.

The Western Assembly considered a compromise by admitting the orthodoxy of the declarations of faith made by the parties in September 1718. But the 13 trustees who held the property of the four Exeter dissenting meeting houses or chapels and controlled their finances appealed to London for further advice.

After much negotiation, the London dissenting ministers of the three denominations – Presbyterians, Congregationalists and Baptists – met at Salters’ Hall to consider a draft letter of advice to Exeter.

The Revd Thomas Bradbury (1677-1759), an uncompromising Calvinist theologian and Presbyterian minister, was the leading figure among the conservative theologians. Another key figure in the debates that lasted for months was John Barrington (1678-1734).

The conference met at Salters’ Hall on 19 February 1719, a day after the royal assent was given to the repeal of the Schism Act. Bradbury proposed some days of fasting and prayer and that a deputation should be sent to Exeter to offer advice on the spot. However, this was voted down.

At a second meeting in Salters’ Hall a week later on 24 February 1719, Bradbury moved a preamble to the letter of advice, incorporating words from the Westminster Assembly’s catechism. This was rejected in a 57-53 vote.

At a third meeting on 3 March 1719, the proposition was put again, but the moderator, the Revd Joshua Oldfield, refused to take a second vote. Over 60 ministers went up into the gallery and subscribed a declaration of adherence to the first of the Anglican 39 Articles and the fifth and sixth answers of the Assembly’s catechism.

The non-subscribing majority, numbering 73, met again at Salters’ Hall on 10 March 1719, and agreed on a position that was sent to Exeter on 17 March. Bradbury and his supporters met separately on 9 March and sent their advice to Exeter on 7 April.

The Exeter trustees took matters into their own hands and excluded Peirce and his colleague from all their meeting-houses. Bradbury played a role in a pamphlet war that followed, which was both political and religious in tone. 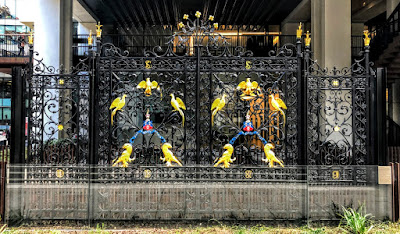 Salters’ Hall continued to be used as a Presbyterian chapel in the 1720s, but by then England’s Presbyterians were dividing between the Calvinists and the non-subscribers who would later become Unitarians.

In the following century, it was decided in 1810 that the hall at Saint Swithin’s that had stood for 142 years was no longer suitable for the needs of the Salters’ Company’s needs and a new hall was designed. The foundation stone of the fifth building was laid on the same site and the new hall was completed in 1827.

Salters’ Hall was home of the company until it was bombed by German aircraft during the Blitz on 10 and 11 May 1941, and most of the fifth hall was destroyed. For the next 35 years, the Salters’ Company was without a hall and was based at 36 Portland Place in the West End.

The company remained there until a new hall was completed, and this opened in 1976. The present hall was designed by Sir Basil Spence (1907-1976), best known as the architect of Coventry Cathedral, who died the same year the Salters’ Hall opened.

The present Salters’ Hall on Fore Street is one of the only Livery Halls in the City of London built in a truly contemporary style. It provides the Salters’ Company with a magnificent ash panelled banqueting hall, committee and court rooms and office accommodation. 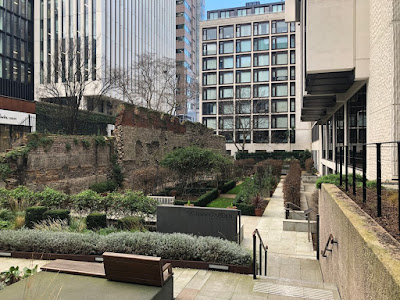 The Salters’ Garden was designed by David Hicks in the early 1990s to commemorate the company’s 600th anniversary (Photograph: Patrick Comerford, 2020)

Beside the Salters’ Hall, the Salters’ Garden was designed in the early 1990s to commemorate the company’s 600th anniversary. It was designed by David Hicks, and is laid out as a knot garden, with a formal geometrical pattern, a fountain and a decorative urn near the remains of the Roman Wall.

The wall and the grounds of the garden are designated as a scheduled monument and protected under the Ancient Monuments and Archaeological Areas Act 1979.

Currently, the Salters’ Company supports the chemical industry and supports education in chemistry, for example by awarding scholarships to chemistry students.

Salters’ Institute, the educational charity of the company, was set up in 1918 as the Salters' Institute of Industrial Chemistry to support chemistry students after World War I. It provides prizes for students of chemistry, chemical engineering, biology and physics, as well as science technicians. It also runs activities promoting the study of science, particularly chemistry. 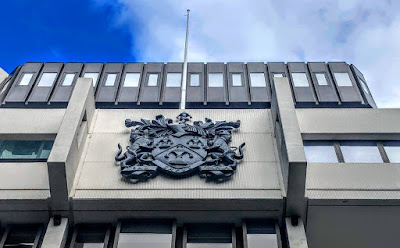