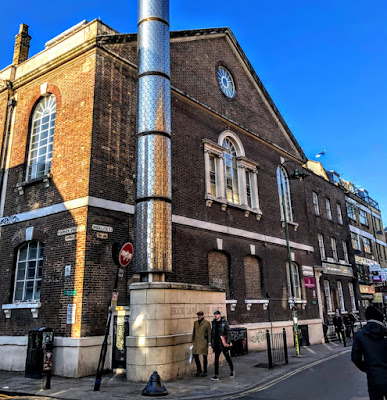 During this week’s visit to London for the launch of resources for Holocaust Memorial Day, I also visited one synagogue (Bevis Marks Synagogue) and the site of two former synagogues in the East End, Fieldgate Street Great Synagogue and Brick Lane Synagogue.

The former Brick Lane Synagogue, now the Brick Lane Mosque, is a prominent, Grade II* listed building on the corner of Fournier Street and Brick Lane, just a short walk from Whitechapel station.

High above the separate entrances for men and women to the mosque, a stone sundial is carved with the Latin words Umbra Sumus, ‘We are shadows.’

These words and the date above them reflect the long history of a building that has stood on the corner of Fournier Street and Brick Lane for almost 250 years. It has been a centre of worship successive waves of immigrants over the centuries who have made the East End and London a colourful place of diversity and pluralism.

This building has been a Huguenot church, an evangelical mission hall, a Methodist chapel, and a Jewish synagogue before becoming today’s mosque.

The building was originally built in 1743 as a church by French Huguenots who settled in the Spitalfields area, having fled religious persecution in France after the revocation of the Edict of Nantes by Louis XIV in 1685.

Many Huguenots moved into the Brick Lane area, where a thriving weaving industry developed. The building was erected in 1743 as La Neuve Eglise or the ‘New Church’ by the Huguenot community. The church was designed by the architect Thomas Stibbs (d. 1759).

The Latin inscription on the sundial, Umbra Sis umus, a quotation from an ode by Horace (4.7), meaning ‘We are a shadow.’

The full stanza poses a contrast between the moon’s renewal and our own mortality:

The moons, however, quickly repair their heavenly losses; when we have fallen to where father Aeneas fell, and wealthy Tullus and Ancus, we are dust and shadow. 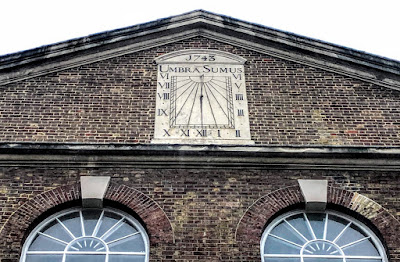 The sundial on the side of the former synagogue dates from 1743 (Photograph: Patrick Comerford, 2020)

The Huguenot chapel on Brick Lane survived for more than six decades. But when weaving declined with industrialisation in the north of England, these Huguenots moved west, becoming part of the larger French-speaking population in Kensington, Chelsea, Westminster, Hammersmith and Fulham, and the Huguenot church on Brick Lane fell out of use.

The building on the corner of Brick Lane and Fournier Street was bought in 1809 by the London Society for Promoting Christianity Amongst the Jews, now known as the Church’s Ministry Among Jewish People. But this mission chapel lasted only 10 years, and from 1819 the building was a Methodist chapel.

In an ironic twist of history, the former church that had been used as a mission hall by a society seeking to convert Jews soon became the main synagogue of a new Jewish community that started to arrive in this part of the East End from the mid-19th century on.

The former Huguenot church at 59 Brick Lane was acquired by a Jewish immigrant community in 1898 and became the Machzike Hadath (‘Upholders of the Faith’) or Machzike Adass Synagogue, and was also known as the Spitalfields Great Synagogue.

The community previously had a smaller synagogue at Booth Street, Spitalfields. The former Booth Street is now the east section of Princelet Street. Nearby synagogues included the Great Synagogue of London and another church building that had become a Jewish place of worship, the Sandys Row Synagogue.

It is this ultra-orthodox community that moved to the former church in Brick Lane in 1898, and transformed it into Brick Lane Synagogue or Spitalfields Great Synagogue.

With services almost around the clock, the congregation was renowned for its piety and strict adherence to orthodoxy. There was a Talmud Torah school next door on Brick Lane, attended by over 500 boys. From 1916, the synagogue’s leader was Rabbi Abraham Isaac Kook, later the first Ashkenazi Chief Rabbi of British Palestine.

The name Machzikei Hadass (מחזיקי הדת, ‘those who reinforce the Law’) comes from a 19th century organisation of synagogues and yeshivas in East Europe that aimed to improve Jewish education and observance. It was also used in Dublin by the community that had a small synagogue on Saint Kevin’s Parade, off Clanbrassil Street, from 1883 and that moved to Rathmore Villas, Terenure, in 1968. The Machzikei Hadass movement owes its origins and traditions to the teaching of the Chatam Sofer.

Over the years, the population of Jews in the East End declined, with many people moving to other parts of East London, and to suburbs in North London. By the 1970s, the congregation had dwindled. The synagogue in Brick Lane closed in 1973 and a successor congregation opened in Golders Green in north-west London, Machzike Hadath.

Meanwhile, the Bengali community in Tower Hamlets was growing rapidly in the second half of the 20th century and it now makes up 32 per cent of the total population of Tower Hamlets. The Brick Lane Synagogue was sold in 1975 and was transformed into a mosque, reopening in 1976 as the London Jamme Masjid or the London Great Mosque.

Brick Lane, once an arterial hub in the Jewish East End, extends from Swanfield Street in Bethnal Green, crosses Bethnal Green Road and continues one-third of a mile south through Spitalfields to Wentworth Street. Brick Lane’s continuation to the south, Osborn Street, is about 400 ft long and leads into Whitechapel High Street.

Brick Lane is still a vibrant, populated place, but most of the Jewish community is long gone, and only four of the 150 synagogues that were built in Tower Hamlets remain today. The Jewish Chronicle reported recently (27 September 2019) that the only Jewish retailer remaining on Brick Lane is Leo Epstein, who is 86 and still selling dress fabrics.

The Epstein family now lives in Hendon, in north-west London, and family members criss-cross London from one end to the other each day to reach their shop. Epra Fabrics is sandwiched between a Bangladeshi restaurant and an empty space with a ‘For Let’ sign.

Rents are rising on Brick Lane as the area becomes increasingly fashionable. Vegan cafés and vintage clothing shops sit in between the Bangladeshi restaurants. But Epra Fabrics remains, despite the persistent flurry of change and development which surrounds it.

Leo Epstein came to England at the age of six, as a refugee from Germany. He told the Jewish Chronicle: ‘Because I was a refugee, I have this positive view of England, which has always been welcoming, to not only Jews, but to other refugees. You see that every day lived out here on Brick Lane. I will admit, though, that it is worrying, what is happening in the world today.’ 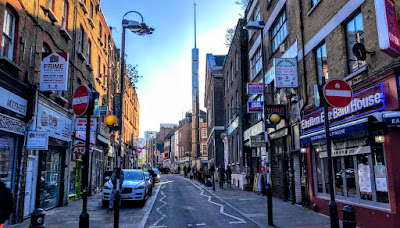 Updated 6 March 2020 with photograph of sundial