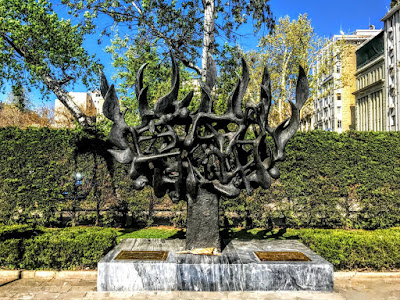 The Jewish Holocaust Memorial at Liberty Square, Thessaloniki … a bronze sculpture by Nandor Glid of a menorah whose flames are wrapped around human bodies (Photograph: Patrick Comerford, 2018)

Do you recall your first visit to a city you now know well and fell at ease in?

I had been through Thessaloniki airport twice on working trips to the Aegean Islands. But 1997 was my first time to stay in Thessaloniki for longer than the time needed for a cup of coffee.

Thessaloniki was the European City of Culture that year, I was working for The Irish Times, and I visited a number of exhibitions, museums, galleries and universities, attended lectures, and met the Patriarch of Constantinople.

Since then, I have returned to Thessaloniki regularly – for a family break, on my way to and from Mount Athos, and, more recently, to be present for Greek Easter the year before last. During all those visits, I have been fascinated about how comfortable I am in Greece’s ‘co-capital’ (συμπρωτεύουσα, symprōtévousa), how I seem to always know my way around, how I have never got lost in the streets.

But it was not until after my first stopover in 1996 that I realised how 80 years earlier my grandfather was in Thessaloniki with the Royal Dublin Fusiliers during World War I, and that after coming down with malaria he was sent back to Dublin from Thessaloniki in May 1916. I like to explain to friends that I exist today because my grandfather got malaria in Thessaloniki.

Thessaloniki has all the charm of a European second city. But it has only been a part of the modern Greek state since 1913. In 1916, this was the launching pad for an anti-royalist uprising, leading to the abdication of King Constantine I in 1917. The city was devastated by a great fire that swept through the city that year. But it was rebuilt and it retains much of its classical, Byzantine and Ottoman charms.

I have long been fascinated by the stories of the Jewish community in Thessaloniki. At one time, the city had a Jewish majority population and was known in Ladino to Sephardic Jews as la madre de Israel, ‘the Mother of Israel’ and as ‘Jerusalem of the Balkans.’

Over the past quarter of a century, I have visited the synagogues, museums, markets and landmark buildings associated with the Jewish community.

The Jewish population in Greece is the oldest in mainland Europe, and the original Romaniote Jews date back, perhaps, to the time of Alexander the Great. But, the Romaniotes are historically distinct and still remain distinct from the Sephardim, who arrived in Ottoman Greece after the expulsion of Jews from Spain in 1492.

At one time, Thessaloniki had over 50 synagogues and the city’s Sephardic community made up half the population in the Ottoman census in 1902, and almost 40% in 1913. The Nazis deported almost the entire Jewish community of Thessaloniki to Auschwitz – over 95% were murdered, fewer than 4% survived.

When I read the a book review in the Economist last month (4 January 2020), I could not resist ordering the newly-published Family Papers: A Sephardic Journey through the Twentieth Century, by Sarah Abrevaya Stein (Farrar, Strauss and Giroux, 2019).

This book tells the story of the Levy family of Thessaloniki, which has become far-flung since the collapse of the Ottoman Empire, the wars of the 20th century and the Holocaust.

The Levys were transformed from Ottomans to Greeks just as family members were scattered across the globe, from Greece to Western Europe, California, Johannesburg, Rio de Janeiro, Bombay, Montreal and Jerusalem. But many branches of the family were also wiped in the Holocaust.

Sarah Abrevaya Stein, who lives in Santa Monica, is a prize-winning Sephardic historian. She is the Sady and Ludwig Kahn Director of the Alan D Leve Center for Jewish Studies, Professor of History and the Maurice Amado Chair in Sephardic Studies at UCLA, and the author or editor of nine books.

She has used the family’s letters, papers and diaries to tell the story of their journeys, to share their grief, to hear their secrets, to reveal their proposals of marriage, plans for divorce, and to retrace their steps. She describes these papers and pages as the frayed and fragile tissue that once held this family together.

This is a rigorously researched family history that offers intimate glimpses not only of one clan but into the history of Sephardic Jews in the 20th century. 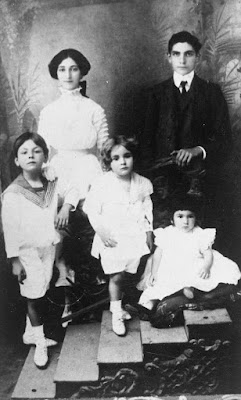 Studio portrait of Esther and Jacques (back), Karsa, Michael and Adolphe Salem (front), 1909 (Family Papers: A Sephardic Journey Through the Twentieth Century, p 63)

Professor Stein has interviewed descendants of the Levy family, who spoke about their lives, shared treasured and intimate letters, photographs and documents.

I expected her to trace this family’s ancestry back to Sepharad, mediaeval Spain and Portugal, from which Sephardic Jews were expelled by the Inquisition in the 1490s. But instead, she led me back to Amsterdam and Belsalel a-Levi Ashkenazi and his son Rabbi Yeuda a-Levi Ashkenazi.

I even wondered – in an absent-minded moment – about the origins of the family name of Sam Confortés. 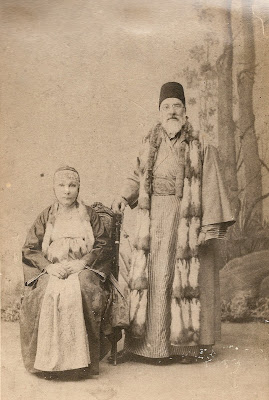 Stein begins by introducing us to Sa’adi Besalel Ashkenazi a-Levi (1820-1903), a thriving publisher and pious man who used his printing press to criticise rabbinical excesses. He sang Turkish songs at wedding receptions and sent a daughter to Paris to train as a teacher. Later, he was heart-broken when he was punished for his outspokenness with a rabbinical writ of heremand ostracised from the community in 1874.

He began writing his memoir during the 1880s, and continued to publish a progressive Ladino newspaper, La Epoka.

The family stories are then told in a series of biographical profiles.

At least two of Sa’adi’s children were murdered in Auschwitz, others survived in faraway places. Daoud or David, a skilled linguist and mathematician once honoured by the Ottomans with the honorific effendi, was the director of the Ottoman Passport Office.

When Thessaloniki became part of modern Greece, David’s sons decided to leave: Leon went to Brazil, Emmanuel to France. But David stayed on in Thessaloniki, became a Greek government official, and lived long enough to be murdered in Auschwitz with much of his family in 1943.

Another of Sa’adi’s sons, Sam Lévy, was a journalist who dreamed of a Thessaloniki where Jews could once again enjoy self-governance. After World War I, he proposed to the Versailles peace conference that Thessaloniki should be ‘a free and neutral city administered by Jews’ with a vote in the League of Nations, ‘a Jewish city-state that was neither Zionist nor Greek.’

Sa’adi’s daughter Fortunée remained in Thessaloniki and married Ascher Jacob Salem, becoming a mother of six. Their eldest son Jacques left for Manchester to set up in business, but was arrested as a foreign national in Britain as World War I broke out and spent four years in jail.

The Holocaust decimated large swaths of the Levy clan. Those who fled to Manchester fared better than those who chose Paris. 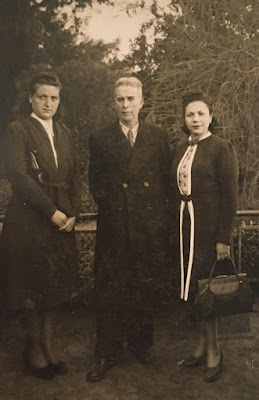 Stein also uncovers the family’s most painful secret: one of Sa’adi’s great-great-grandsons, Vital Hasson, was a notorious Nazi collaborator. In a feature in the Greek Reporter last month [27 January 2020], she also recalled his life and death.

He tried to escape to Albania, Italy and Alexandria, and evaded arrest on at least four occasions. But he was so feared and despised that the few Jews remaining in Greece after World War II, demanded his trial.

He was executed in Corfu on 4 March 1948. The Greek civil war was its height. Six communists who were also condemned to death protested against being shot alongside ‘the traitor Hasson.’ When he stepped forward, he faced a fellow Greek Jew, Shlomo Behar, a survivor of Auschwitz, who volunteered to join the firing squad to avenge Vital’s many victims and to testify back in Thessaloniki that justice had been done. 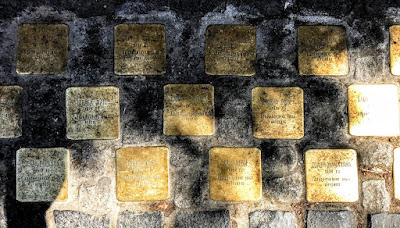 The names of Holocaust victims on the pavement in Vassilisis Olgas Avenue … Sam Levy, murdered in Auschwitz in 1943, is named on the Stolperstein or ‘stumbling stone’ second from right on the bottom row (Photograph: Patrick Comerford, 2018)

Dr Stein has found the descendants of Sa’adi Besalel Ashkenazi a-Levi in Lisbon, Manchester, Barcelona, Paris, Bombay, Montreal, Rio de Janeiro, California, and in Greece. One is a musician, another an ambassador, some are in politics, others are engaged in business.

The Levy cousins, she writes, ‘had lived under Ottoman, Greek, German, French, Spanish, Portuguese, British, Indian and Brazilian rule; they had witnessed the 1917 fire in Salonica, the Balkan Wars, the First and Second World Wars; and they had emigrated in multiple directions, some more than once.’

But, in time, old family differences resurfaced, and many descendants of the Levy clan are not aware of the family’s complex past, nor can they speak Ladino, the Judaeo-Spanish dialect once spoken throughout Thessaloniki.

If family members have forgotten Ladino, Thessaloniki too was in danger of forgetting the Levy family: in recent years, officials were still finding Jewish gravestones used to pave the city’s footpaths, including parts of the pyramidal headstone from the tomb of the family patriarch, Sa’adi Besalel Ashkenazi a-Levi.

Dr Stein says in her conclusions, the descendants of this family ‘are amiable, generous souls living culturally vibrant lives full of family, and integrated into the national and cultural contexts they call home.’

This Sephardic journey through the 20th century is another pilgrimage or Camino, a journey that I have already experienced on some of its early stages. As she says in Ladino in the opening pages of this book, Kamino kon Buenos, te hazeras uno de eyos … ‘Walk with good people and you will become one of them.’