How the doors closed at
Whitechapel Foundry
after almost 450 years 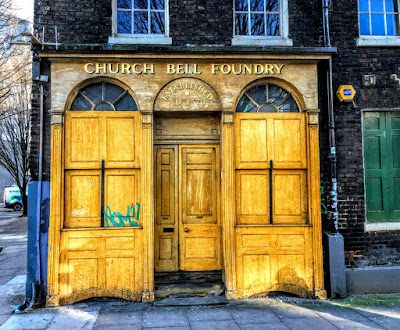 I was blogging last night about how Whitechapel Gallery is one of the places I regret not visiting during a walk-around in the East End of London. One of the buildings I could not visit was the Whitechapel Bell Foundry, which was the oldest manufacturing company in Britain until it closed in 2017.

The foundry was known to generations of clergy because it made church bells and their fittings and accessories, as well as single tolling bells, carillon bells and handbells. Even if we did not have Whitechapel bells in our churches, we knew of the foundry because of advertising in church directories, books and magazines.

The foundry in Whitechapel was also the place where the Liberty Bell, a symbol of American independence, was made, and for re-casting Big Ben in the north clock tower or Elizabeth Tower at the Houses of Parliament in Westminster.

The Master Founders or bell makers of Aldgate and Whitechapel can be traced back to 1420. The three bells manufacturer’s mark can be seen on the bells and the three bells sign hung over the door of the Whitechapel site.

The Whitechapel Bell Foundry company dates from 1570. The last premises at 32-34 Whitechapel Road, backing on to Plumbers Row, dates from 1670 and was formerly a coaching inn, ‘The Artichoke,’ damaged in the Great Fire of London in 1666.

The Artichoke closed in 1738 and the Whitechapel Bell Foundry moved into the premises the following year. The foundry remained at the site until May 2017. It was one of only two bell foundries left in the UK and had been in continuous production for almost 450 years.

In 1752, the foundry, then known as Lester and Pack, cast the Liberty Bell, was commissioned to celebrate the 50th anniversary of William Penn’s Charter of Privileges in 1701, Pennsylvania’s original constitution.

As a result of damage sustained during its stormy passage across the Atlantic, the bell cracked when it was first rung, and after repeated repairs cracked again in 1846 when rung to mark George Washington’s birthday.

Big Ben, the largest bell ever cast at the foundry, was cast in 1858 and rung for the first time on 31 May 1859. Big Ben also cracked because too heavy a hammer was initially used. The crack and the subsequent retuning give Big Ben its present distinctive tone. The final bill for Big Ben was £572.

Churches with bells from Whitechapel include ones as near as Saint Mary-le-Bow, Cheapside and the Church of Ireland parish church in Skibereen, Co Cork, and as far as the Armenian Church in Chennai, India, as well as church throughout England, Ireland, the US and Australia.

The Hughes family bought the foundry in 1904, and continued to own it until its recent closure.

The business adapted throughout the centuries and in modern times, producing handbells and doorbells, and responded to a surge in orders for table bells, following the popularity of the ITV period drama series Downton Abbey.

After the 9/11 attacks in the US in 2001, the company made the Bell of Hope as a gift from the people of London to the city of New York. It is rung at 08:46 on the anniversary each year, marking the time the first plane hit the first of the Twin Towers. It was first placed in Trinity Church, Manhattan, and now hangs in Saint Paul’s Chapel.

The manufacturing patents for the Whitechapel bells were sold to Whites of Appleton, Oxfordshire, who had with a business relationship with the foundry for 197 years. Whites also bought the pattern equipment and a new tuning machine.

Whitechapel tower bells will be cast by Westley Group Ltd. Whitechapel musical handbells and the supplies of supporting music and accessories will be available from Bells of Whitechapel Ltd, along with the entire range of Whitechapel presentation bells, door bells, bracket bells and ships bells. The bell foundry archives have been deposited with the London Metropolitan Archives.

The Whitechapel premises are a Grade II* listed building. In March 2017, a consortium of heritage groups, including Save Britain’s Heritage, The East End Preservation Society, the Society for the Protection of Ancient Buildings, the Ancient Monuments Society and the Royal Academy of Arts attempted to have the foundry premises listed as a Grade 1 listed building as an asset of community value.

The foundry was sold to a US investor, Raycliff, who announced plans to convert the foundry building into 108-room hotel, with a workshop, public café and artist space. A small working foundry would exist on the site, and a manufacturing firm agreed to make hand bells there.

However, members of the art world have spoken out against the plans. Campaigners, including the Victoria and Albert director Dr Tristram Hunt and Sir Antony Gormley, have backed a bid to return it to a fully working foundry. The United Kingdom Historic Building Preservation Trust which wants to buy back the buildings and maintain them as a working foundry.

Dr Hunt said the foundry needed to be kept ‘to enrich the cultural presence and attract national, regional and international interest.’ The art historian Dan Cruickshank called it ‘a landmark’ that deserves ‘the highest level of protection.’ 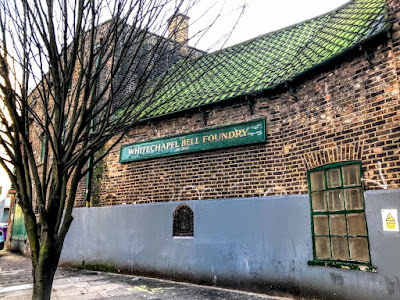 Members of the art world have spoken out against plans to convert the foundry into a boutique hotel (Photograph: Patrick Comerford, 2020)