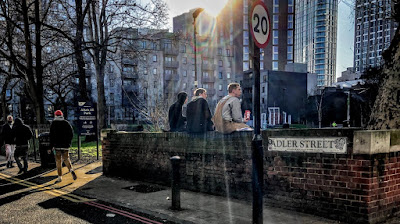 Adler Street, off Whitechapel Road, with the ruins and churchyard of the original ‘white chapel’ or Saint Mary Matfelon to the right behind the wall (Photograph: Patrick Comerford, 2020)

During a recent walk through the East End, I also went in search of the original ‘white chapel’ that gave its name to Whitechapel, which is part of the London Borough of Tower Hamlets.

Originally, this was part of the Roman road between the City of London and Colchester, leaving the city at Aldgate.

Whitechapel was once part of the ancient parish of Stepney, and takes its name from a small chapel of ease dedicated to Saint Mary, the second-oldest church in Stepney after Saint Dunstan’s Church. For some unknown reasons, the church was known as Saint Mary Matfelon.

The church was whitewashed at an early stage, and became known as the ‘White Chapel,’ giving its name to the surrounding district. Its earliest-known priest was the Revd Hugh de Fulbourne in 1329.

Stepney was divided into nine separate parishes in 1673, when one of them was the newly formed parish of Saint Mary’s, Whitechapel.

The Rector of Whitechapel, the Revd Ralph Davenant, bequeathed a legacy in 1680 for the education of 40 boys and 30 girls of the parish. The Davenant Centre still exists, although the Davenant Foundation School moved from Whitechapel to Loughton in 1966.

The Revd Richard Welton, who became Rector of Saint Mary’s in 1697, had strong Jacobite sympathies, and regarded his Whig contemporaries as apostates. In 1713, he placed a new altarpiece in the church, depicting the Last Supper. The painter, James Fellowes, was commissioned to paint Judas like Bishop Gilbert Burnet, but Fellowes instead used an image of permission to substitute White Kennett, Dean (and later Bishop) of Peterborough, with the words ‘The Dean the Traitor’ underneath. Saint John the Divine, depicted as a youth, had a likeness to the Stuart pretender, Prince James Edward.

The bishop of London, John Robinson ordered its removal, and Welton was deprived of his office in 1715.

A third church was built on the site in the 19th century, largely at the expense of Octavius Coope, and it was opened and re-consecrated on 2 February 1877. Three years later, on 26 August 1880, the new church was devastated by a fire that left only its tower, vestry and church rooms intact. It was rebuilt and opened once again on 1 December 1882, this time with a capacity for 1,600 worshippers and including an external pulpit for sermons, some of which, it is said, were delivered in Yiddish.

A German fire raid destroyed the church during the Blitz on 29 December 1940. It was left in disrepair until it was finally demolished in 1952.

The site of the church and the churchyard became Saint Mary’s Gardens in 1966, and an outline of the footprint of the church is all that remains of it. The park is known to many local people as ‘Itchy Park.’ It is officially named Altab Ali Park in memory of a young Bengali tailor who was murdered nearby in 1978.

Whitechapel was at the heart of the East End Jewish community in the 19th and early 20th centuries. But it was also the scene of the infamous Whitechapel Murders by ‘Jack the Ripper’ in the late 1880s.

But one reminder of the once-strong presence of the Jewish community in this part of Whitechapel is in the name of Adler Street, to the east of the site of Saint Mary’s and the park surrounding the ruins of the original ‘White Chapel.’

The name of Adler Street commemorates Herman Adler (1839-1911), who succeeded his father, Nathan Marcus Adler (1803-1890), as former Chief Rabbi. Chief Rabbi Herman Adler was a regular visitor to Ireland, including two pastoral visits to the Jewish community in Limerick in 1888 and 1892.

The Adler Hall, which once stood on this street, was home to the New Yiddish Theatre in 1943-1947.