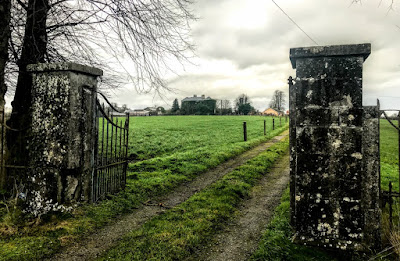 One of the houses I pass regularly in this parish is Elm Hill, a mid-18th century house on a difficult bend on the road between Rathkeale and Ardagh in west Limerick. This once elegant house, built by Maurice Studdert, a volunteer captain and magistrate, has an interesting link with a large clerical family and with the Studdert family who once owned Bunratty Castle, Co Clare.

The Studdert family traces its origins to Yorkshire, Suffolk and Cumberland in England. But the Studdert families of Rathkeale and Bunratty were descended from Canon George Studdert (1652-1738), who was born in Armagh and educated at Trinity College Dublin.

During the Williamite wars, he was a chaplain to William III and preached before the him before the Siege of Limerick in 1690 from Psalm 45: 4-5:

In your majesty ride on victoriously
for the cause of truth and to defend the right;
let your right hand teach you dread deeds.
Your arrows are sharp
in the heart of the king’s enemies;
the peoples fall under you.

Later, George Studdert married Millicent Rose, a sister of the Chief Justice, and he was granted large tracts of land at Ardlaman (Alemond) in Co Limerick.

His eldest son, Thomas Studdert, acquired Bunratty Castle and was High Sheriff of Co Clare. A younger son, Maurice Studdert, married Anne Hewitt, an heiress, and was the first member of the family to live at Elm Hill, outside Rathkeale, held on a lease from Lord Southwell of Castle Matrix, Rathkeale.

Maurice Studdert’s youngest son, Canon George Studdert (1759-1813), was the curate in Rathkeale in 1792 and later became Prebendary of Kilpeacon in Limerick. George married Elizabeth Massy of Stoneville, near Rathkeale, and died on 21 December 1813 after an accidental fall into an unprotected area of a new building.

Canon George Studdert was a brother of William Studdert who married Elizabeth Dowdall, and they were the parents of one of my predecessors as Precentor of Killaloe in the 19th century, Canon John Studdert, a grandson of Maurice Studdert of Elm Hill, Rathkeale, Co Limerick.

Maurice Studdert’s eldest son, also Maurice Studdert of Elm Hill, donated the site for Saint Molua’s Church in Ardagh, Co Limerick, on 2 April 1813, to the parish priest of Ardagh, Father James Corbett, along with a subscription of £10 to the building fund. The neighbouring landowners followed his example, and building was completed before the end of 1814. This Maurice Studdert was the father of Ion Studdert (1788-1860), who inherited Elm Hill and was a Justice of the Peace and Deputy Lieutenant for Co Limerick. 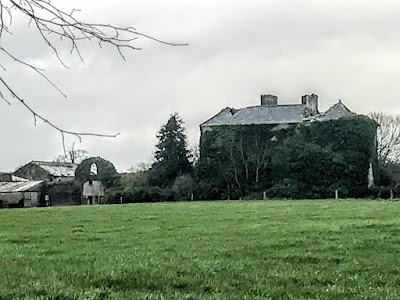 The Great Famine brought the Studdert family to the brink of bankruptcy and forced the sale of Elm Hill (Photograph: Patrick Comerford)

Ion Studdert was living at Elm Hill in the mid-19th century, when the buildings were valued at £27. The Great Famine had taken its toll on the family and the estate, and they were bankrupt by 1855.

The house and the estate of about 1,500 acres were advertised for sale in June 1855. A lithograph of the house was included with the rental, when Elm Hill was described: ‘The Mansion House of Elm Hill stands on this lot, and contains a spacious and lofty parlour, drawing room and hall; nine capital bedrooms, large kitchen and servants’ hall, besides larder, dairy, closet and cellars of a superior description and in thorough repair.’

Outside, there was stabling for 15 horses, a forge, coach house, laundry, barn, and fowl and cow houses, a walled garden with fruit trees and vegetables, paddocks, and a demesne with valuable timber, including oak, ash, elm, beech and larch.

Elm Hill then passed through the Wandesforde and Magner families, and was bought in 1931 by the Woulfe family, who moved to Elm Hill around 1932.

A member of this family, Catherine Woulfe, married Thomas Griffin. They were first cousins and eloped and went to the US. Their son, James A Griffin (1883-1948), was Bishop of Springfield, Illinois.

Two brothers, Dick and John Woulfe, lived at the Elm House until Dick died in 2000 and John went into a nursing home. 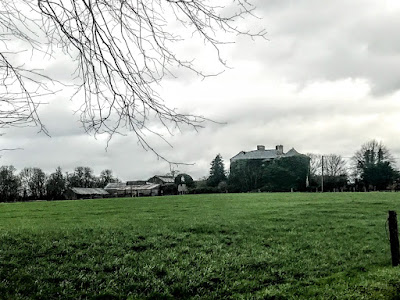 Elm Hill House is now in a sad, neglected state, with a large hole in the roof. It is fast becoming derelict, with rain pouring into through the roof, and the floorboards rotting. Who knows what has happened to the plastered ceilings?

Yet, looking at this once-imposing house, it is possible to imagine its former grandeur. A high level of technical and artistic skill went into its design, including its tooled limestone doorcase, the carved timber door and the slate-hung elevations.

Inside, the house had many interesting features, including the spoked fanlight, slate fireplaces, plastered ceilings, sliding sash windows, slate-hung walls and terracotta ridge tiles. The outbuildings included a coach house with a carriage arch, a red-brick dovecote and a walled garden. One of the outbuildings was said until recently to retain a pencil inscription dating from 1911 with the signatures of farm workers.

Local lore talks about a ghost outside the old house. Several people reportedly claim to have seen a ghostly little girl run up the front stairs and tug at the door as if she is trying to get in. Legend says the girl was run over by a carriage in the drive in front of the house.

As for the extended Studdert family, many members of the Bunratty and Elm Hill branches were Anglican priests in Ireland, England, and further afield. The Revd Thomas de Clare Studdert (1870-1948), whose father was from Co Limerick, was a missionary in Fuzhou in China (1897-1912) before returning to parish ministry in Co Limerick. Some of his children were born in Fuzhou, including Archdeacon Augustine John de Clare Studdert, whose ministry included being curate of Saint Martin in the Fields, London, an assistant chaplain in the British embassy in Paris, and Archdeacon of Surrey; and Canon Charles Studdert, Precentor of Leighlin (1962-1978) and Precentor of Ossory (1968-1978). 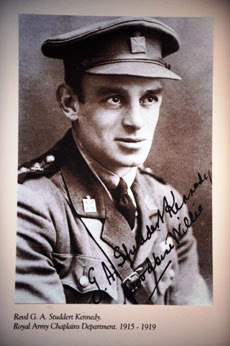 As for Dean Kennedy of Clonfert and his wife Anne Studdert, they were the parents of William Studdert Kennedy, vicar of Saint Mary’s, Quarry Hill in Leeds, and grandfather of the Revd Geoffrey Anketell Studdert Kennedy, MC (1883-1929), the Anglican priest-poet who was known as ‘Woodbine Willie’ for giving cigarettes along with spiritual pastoral care to injured and dying soldiers in the trenches in World War I.

‘Woodbine Willie’ always regarded himself as Irish, and studied theology and classics at Trinity College Dublin before training for ordination at Ripon College.

When he died in Liverpool in 1929, exhausted at the age of 45, it is said the Dean of Westminster refused his burial at Westminster Abbey because, he said, Studdert Kennedy was ‘a socialist,’ although he had distrusted politicians and had never joined a political party. His funeral took place, instead in Worcester, where he had been a vicar before the war, and poor people flocked to pay him their respects.

Every time I pass through Birmingham on my way to and from Lichfield, I recall his poem ‘Indifference’, or ‘When Jesus came to Birmingham,’ written while he was a war chaplain. In this poem, he compares the behaviour of Christ’s contemporaries with our behaviour today towards the stranger and the outcast, and challenges us to consider whether we are following Christ to Golgotha.

Elm Hill stands at a difficult junction, and the Studdert family is fading from memory (Photograph: Patrick Comerford)

My father was born there when his parents worked there

Maurice Studdert was my ancestor through his daughter Bridget who married John Stack. Shame about the house, hopefully someone will restore it.

Thank you for such an interesting read. I believe Fr. John Corbett is in my family tree.

Unfortunately it is so far gone into a ruinous state that it's unlikely that anyone will ever rescue it and return to its former glory...