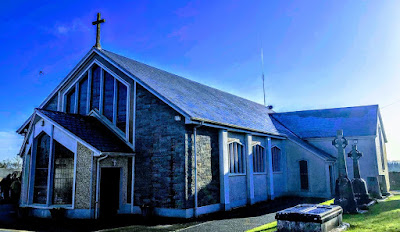 Ardagh-Carrickerry is a parish in west Co Limerick. The village of Ardagh is situated on the R523, on the road to Foynes and Shanagolden. The nearest main town is Newcastle West, about three miles away.

The parish is bounded to the west by Athea, to the north by the parish of Coolcappa, to the east by Rathkeale and to the south by Newcastle West.

The parish is first mentioned in 1200 when it is named Ardachadh, meaning the ‘high field.’ But the discovery of the Ardagh Chalice in a ringfort nearby at Reerasta in September 1868 shows the church settlements in the area date back to many centuries. The Ardagh Chalice is regarded as one of the finest examples of early Christian Irish metalwork. 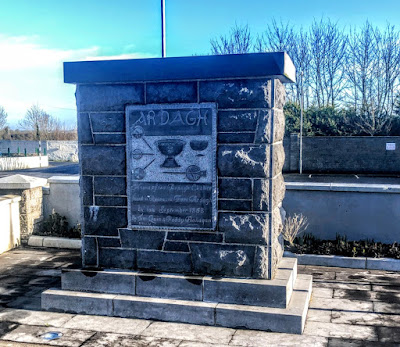 A monument in the church grounds commemorates the discovery of the Ardagh Chalice in 1868 (Photograph: Patrick Comerford, 2020)

After the arrival of the Anglo-Normans, Ardagh became an important centre and the manor belonged to the Bishops of Limerick. The ruins of the 15th century parish church, destroyed in the political violence in 1641, can be seen in the local cemetery, behind the church.

The post-Reformation Roman Catholic parish was amalgamated with the Newcastle West, and Father Paul Creagh was registered as the parish priest of both parishes in 1704. A separate parish in Ardagh was formed in the 1750s or 1760s.

Before the present parish church was built, the Roman Catholic parishioners in the village of Ardagh were served by a mass house near where Aherne’s petrol pumps stood. 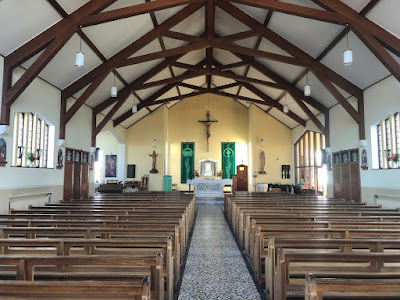 The site for the present church was obtained on 2 April 1813 by the parish priest of Ardagh, Father James Corbett, one of the first priests ordained in the early years of Maynooth College, founded in 1795.

The site was donated freely by Maurice Studdert of Elm Hill, along with a subscription of £10 to the building fund. The neighbouring landowners followed his example, and building was completed before the end of 1814.

The new church was named after the patron saint of the parish, Saint Molua.

The early 19th century church was demolished in 1965, apart from the East Wall, was extended, rebuilt and extensively renovated, and opened again for worship in 1966. 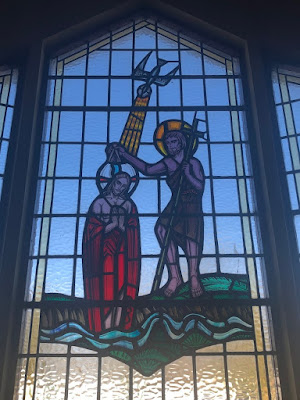 The Baptism of Christ depicted in the porch window (Photograph: Patrick Comerford, 2020)

The large entrance porch has a five-section window that rises above the roof of the porch to the top of the gable. The three-light stained-glass window inside the porch depicts the Baptism of Christ by Saint John the Baptist.

The main altar is made from marble. The tabernacle is placed in a marble lined recess surmounted by a large crucifix on a sanctuary wall that is otherwise without decoration. To the right is a statue of the Virgin Mary and Christ Child.

The modern nave is lighted by three five-light windows on each side.

The statues in the church and the Stations of the Cross are regarded as good examples of modern ecclesiastical art. 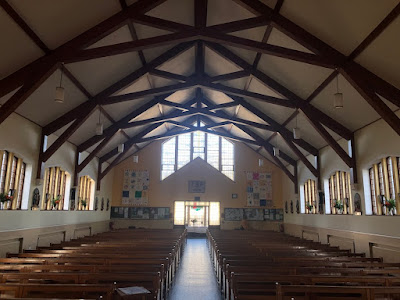 Father Maurice Cremin, who died in 1887 at the age of 31, is buried within the church. A plaque to his memory was placed in the right aisle by his fellow priests of Newcastle-on-Tyne. 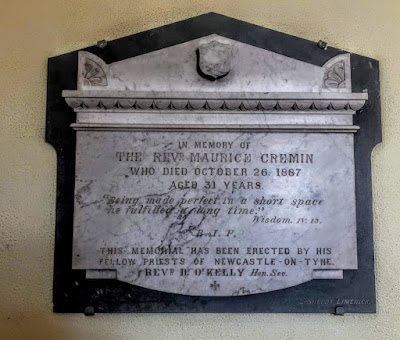 The monument to Father Maurice Cremin, who died in 1887 at the age of 31 (Photograph: Patrick Comerford, 2020)

The oldest headstone in the graveyard behind the church marks the grave of Robert de Lacey, Bishop of Limerick (1737-1759), who is buried in the family vault inside the old church. 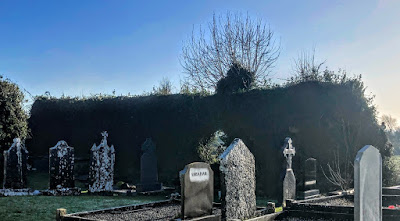 The ruins of the 15th century parish church, destroyed in 1641, stand in the cemetery behind the church (Photograph: Patrick Comerford, 2020)