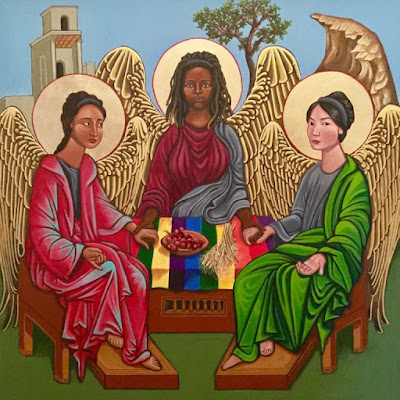 Throughout the lockdown that is part of the response to the Covid-19 pandemic, I have continued the practice of preparing my Sunday morning sermons, and have posted them on my blog, my Facebook page and the parish Facebook page each week.

We are in the weeks immediately after Trinity Sunday, and there is a Trinitarian theme in many of the readings these Sundays.

Richard Rohr, the Franciscan theologian and spiritual writer talks about the Trinity as ‘God for us, God alongside us, God within us.’

The first reading tomorrow (Genesis 18: 1-15 [21: 1-7]) tells the story of the angelic visitors to Abraham and Sarah at the oaks of Mamre, often interpreted as an early manifestation of God as Trinity. This interpretation has become a regular way of reading this passage through the popularisation of Andrei Rublev’s icon of this scene, which is copied in churches and monasteries around the world and used to illustrate many books on theology.

In the last few days, as I was putting the final touches to tomorrow’s sermon, I came across this version of the Visitation of Abraham or Rublev’s Trinity by the American artist Kelly Latimore, who became well-known recently for his portrayal of the Holy Family on the Flight into Egypt as refugees trying to travel from Central or Latin America into the US.

I found this interpretation of Andrei Rublev’s icon this week on the Facebook page of Saint Thomas’s Anglican Church in Kefalas, on the Greek island of Crete.

This icon by Kelly Latimore was a commissioned by the Revd Dr Mark Bozzuti-Jones, a Jamaican-born priest on the pastoral team at Trinity Wall Street Church in New York.

As humans, we really can only talk about God through metaphor. Speaking and language itself is simply metaphor. The common western notion of God has been monarchical and so both God the Father and Christ are often imagined or depicted sitting on thrones, although the theology of the Trinity is about the interior relationship or indwelling of God as Trinity.

Rublev’s icon was original in its time, imagining this Triune relationship, drawing on the story of the three angels who visit Abraham and Sarah. His icon shows the three angels sitting at the table, each angel representing the Father, Son and the Holy Spirit. Rublev was using the metaphors he had to depict the Trinity in the form of an icon.

Mark Bozzuti-Jones and Kelly Latimore collaborated on an interpretation of Rublev’s icon that Mark that was based on this well-known icon but with an understanding of metaphors of God that allowed them to see the angels as women without problems, yet allowing an but an important exploration of God as mother/sister/feminine.

The three figures are sitting at the table, but this time they are holding hands. The Christ figure is in the centre, bridging the Holy Spirit and the first Person of the Trinity.

In traditional iconography, blue always represents divinity (the sea and the sky) and red is humanity (blood). God the first person of the Trinity is on the left in bright heavenly robes, points towards the viewer and looks at the other seated figures, acknowledging the viewer’s presence.

The Holy Spirit is dressed in green, representing growth, wilderness, nature, the earth, she holds out her hand inviting the viewer to the table.

On the table the rainbow tablecloth is yet another metaphor, symbolising that at the table of the Trinity all people are welcome. Instead of the Eucharist, as in Rublev’s version, there are grapes and wheat, symbolising the work that is still to be done.

In the background, we see a Temple, where God dwells, a tree representing Christ crucified, and a mountain symbolising the spirit calling us out into the wilderness, towards a new way.

Kelly Latimore started painting icons in 2011 while he was a member of the Common Friars from 2009 to 2013. Their collective work was about being more connected – to themselves, to each other, to their surrounding community and to the land.

However, he says, he does not wish to approach iconography as an art form that simply follows an inherited tradition, knowledge and practice. ‘I want it to be a creative process, meditation, and practice that brings about new self-knowledge for the viewer and myself. Who are the saints that are among us here and now?’

Kelly feels the need for new images. So, in some icons he seeks to embrace the traditional forms and images. But for many icons he believes the images need re-shaping, re-imagining, and re-wondering.

He says, ‘I was not taught by a traditional iconographer, and so to some, I am breaking many rules. There are icons here that people may find theologically unsound and wrong, or for others, helpful and inspiring. I think both reactions are important. My hope is that these icons do what all art can potentially do, which is, to create more dialogue.’

He hopes that, ‘by transcending our biases, listening and having inner silence about our convictions, our inherited traditions, or our favourite ideas we can become open to the patterns of work, knowledge and experience we may not have seen in the other or buried in ourselves.’ 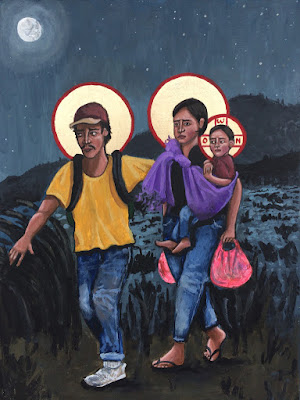 The Holy Family as Refugees … an icon by Kelly Latimore