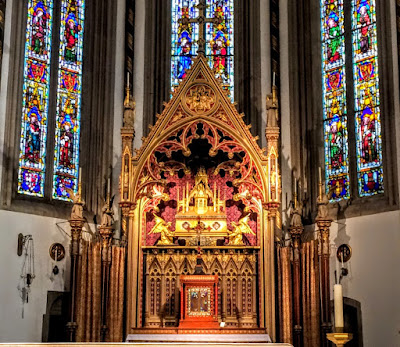 I was writing yesterday of how pleased I am to have acquired my own copy of Michael Greenslade’s Catholic Staffordshire, with its stories of recusancy, ‘priests’ holes,’ conspiracies, poverty and family networks.

This book has many colourful vignettes, including the story of how Saint Chad’s relics were taken from Lichfield Cathedral during the Reformation and found their way 300 years later to Saint Chad’s, the Roman Catholic cathedral designed by AWN Pugin in Birmingham.

Greenslade recalls how in 1538 Thomas Cromwell ordered the removal of all images linked with pilgrimages. Rowland Lee, Bishop of Lichfield, persuaded Henry VIII to give Saint Chad’s shrine to the cathedral for its ‘necessary uses,’ but Greenslade presumes the shrine’s jewels and ornaments were seized for the Crown. 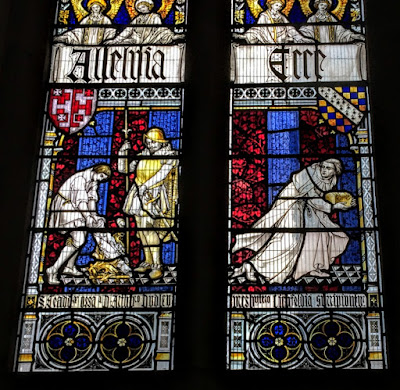 Canon Arthur Dudley took some of Saint Chad’s bones and smuggled them out of Lichfield Cathedral in 1538, and he entrusted to two women in his family who lived at Russells Hall in Dudley, then in Worcestershire.

However, these two women became nervous about holding on to the relics, and gave them to two of their friends, Henry and William Hodgetts of High Arcal Farm at Woodsetton in Sedgley, then in Staffordshire.

When William Hodgetts died in 1649, his widow gave his portion of the relics to Henry Hodgetts. Henry was attended on his deathbed in 1651 by the Jesuit Father Peter Turner, and they had known each other for 20 years. Henry Hodgetts told his priest friend the relics were wrapped in a piece of buckram and hidden safely in the canopy of his four-poster bed. 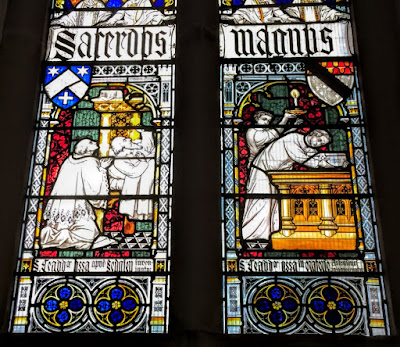 Henry Hodgetts points Father Peter Turner to the relics in the canopy above his deathbed, and they are moved to the homes of the Fitzherbert family … a window in Saint Chad’s Cathedral (Photograph: Patrick Comerford)

When Henry died, his widow entrusted the relics to the priest, and after Turner died in 1655, they passed to John Leveson of Willenhall, near Walsall, then in Staffordshire. When a group of Parliamentarian soldiers raided his house, they found the box of relics, broke it open, smashed one of the bones in two, and removed some of the contents.

However, the Jesuits regarded the relics as their own property, and in 1665 Father William Arkins of Wolverhampton placed them in a silk-lined, velvet-covered box with the embroidered monograms IHS and MRA.

The relics eventually passed from the Jesuits around 1740 to the Fitzherbert family of Swynnerton, near Stafford. When Basil Fitzherbert died in 1797, his widow and the family heir who was then a minor moved to Aston Hall, near Stone. There they might have been forgotten but were discovered under the altar in the chapel at the hall by Father Benjamin Hulme soon after he arrived as a chaplain at Aston Hall in 1839. 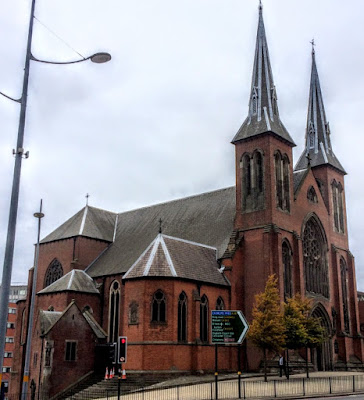 Saint Chad’s Cathedral, designed by AWN Pugin, was then being built in Birmingham. The bones were first taken to Oscott College, where Bishop Edward Walsh satisfied himself that these were the authentic relics of Saint Chad of Lichfield.

When Saint Chad’s Cathedral was consecrated in 1841, a casket designed by Pugin and containing all six bones was placed in a shrine above the High Altar. 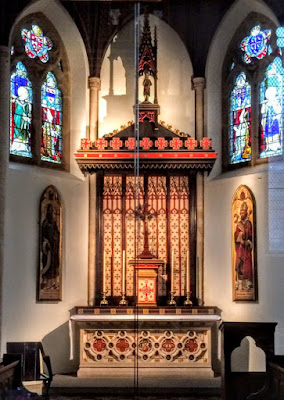 The story of how the bones were removed from Lichfield Cathedral, hidden, moved again, and finally brought to Birmingham is told in five windows in Saint Edward’s Chapel in the cathedral in Birmingham.

Five windows in the chapel designed by Donald Taunton of John Hardman & Co tell the story of how Saint Chad’s relics were taken from Lichfield Cathedral at the Reformation, kept in the safekeeping of different Catholic families in Staffordshire, until they were brought to Saint Chad’s Cathedral when it opened in 1841 and enshrined above the High Altar.

The first window shows Canon Arthur Dudley taking the relics from the shrine of Saint Chad in Lichfield Cathedral in 1538 to save them from destruction.

Henry Hodgetts is shown in the second window telling Father Anthony Turner in 1651 that the hiding place is on the canopy of his four-poster bed. The relics are then hidden under an altar at Aston Hall, near Stone in Staffordshire. 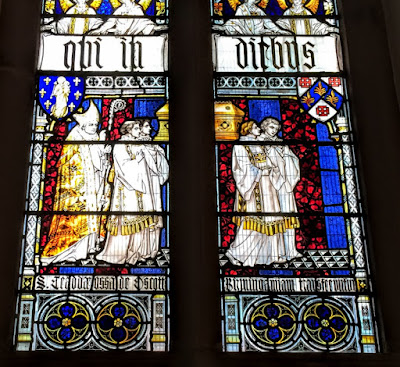 The relics are moved from Oscott to the cathedral at its consecration (Photograph: Patrick Comerford)

Finally, the relics were transferred to the new cathedral in Birmingham by Bishop Edward Walsh. The fourth window shows the relics being moved from Oscott to the cathedral at its consecration in 1841. 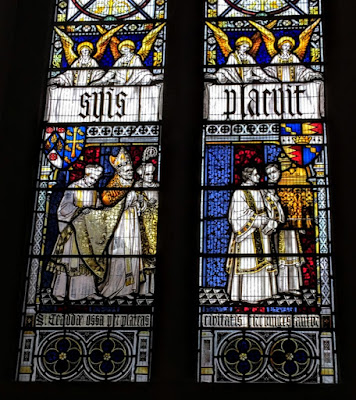 The windows also contain the family coats-of-arms of the religious and lay people who helped the building of the cathedral. The fifth window is a tribute to the workforce. 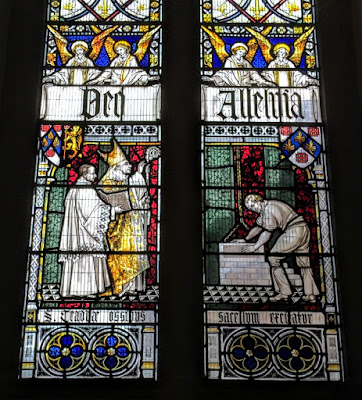 The fifth window is a tribute to the workers and craftsmen who built Saint Chad’s Cathedral (Photograph: Patrick Comerford)

In 1995, Archbishop Maurice Couve de Murville sent the six bones from Birmingham to Oxford for testing and carbon testing. The report appears to confirm Bishop Walsh’s supposition: five of the bones date from the seventh century and four of them belong to one and the same person. The sixth bone was dated from the next century.

Greenslade concludes: ‘The earthly remains of St Chad of Lichfield, long preserved in Catholic Staffordshire, can now be supposed to rest in the mother church of the diocese to which Staffordshire belongs.’