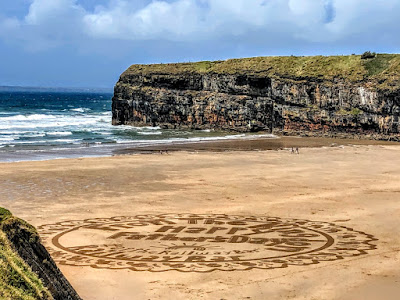 Today is both Midsummer’s Day and Father’s Day.

Despite it being Midsummer’s Day, the summer sunshine gave way to rain in Askeaton for most of this weekend.

I remember a Midsummer’s evening in Cambridge some years ago, watching Shakespeare’s A Midsummer Night’s Dream in the gardens of Saint John’s College, and the lines: ‘So quick bright things come to confusion,’ when Lysander speaks to Hermia of the fragility of happiness.

Or Hermia’s words to Lysander: ‘Belike for want of rain, which I could well Beteem them from the tempest of my eyes.’

I woke this morning to Father’s Day presents of a bottle of Masi Campo Fiorin and a bottle of Cockburn’s Special Reserve Port.

Later, after celebrating the Eucharist in the Rectory, as the clouds opened yet again, two of us went to ring the bell in the Templar Tower at Saint Mary’s Church, Askeaton. 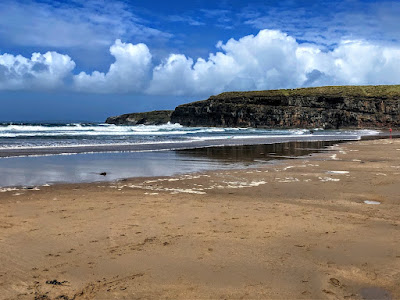 It might have been an afternoon for watching old moves on the television. But the sun came out again at noon, and two of us headed west to Beale Strand to enjoy a walk on the beach, on clear white sands with blue skies above, looking out at the place where the Shannon Estuary flows into the Atlantic.

As the skies brightened and the lingering clouds began to break up, we decided to continue heading west to Ballybunion.

Although the North Beach, below the cliffs at Ballybunion, has lost its Blue Flag, it was sparking in the afternoon summer sunshine. Below, as we walked down the path to the beach, the Railway Bar in Ballybunion had left ‘A Happy Father’s Day’ greeting in the sand. The pubs are not open yet, but they know how to leave their mark.

Despite the red flags, some surfers were taking the risk to enjoy the high Atlantic waves.

Daroka, my favourite restaurant in Ballybunion, closed last autumn. It is sorely missed, and so we had our coffee in the car park opposite Daroka. But, above the South Beach, which still has its Blue Flag, there are many inviting restaurants, waiting to be explored and enjoyed when this lockdown ends. 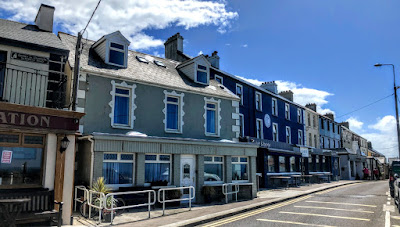 A colourful terrace of houses and restaurants in Ballybunion above the South Beach in this afternoon (Photograph: Patrick Comerford, 2020)

This evening, to celebrate Father’s Day, I hope to share that bottle of Masi Campofiorin.

Campofiorin, the prototype for a new category of wines made with semi-dried grapes, was born in 1964 in the gentle hills of Verona as the result of an inspired technical experiment: refermentation of the best Veronese wine made of freshly-picked grapes on the lees of Amarone. For many decades now, it has been a benchmark for its territory of origin on the international stage.

The label on Campofiorin bears the motto: Nectar Angelorum Hominibus, ‘Nectar of the Angels for Human.’ I should enjoy that later this evening. 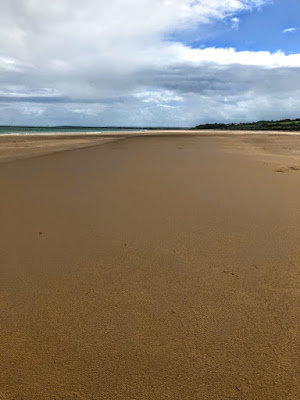