A reminder of Henry Grattan
200 years after his birth 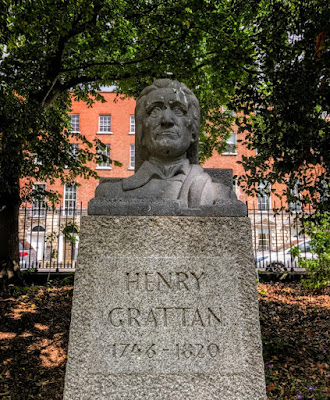 The bust of Henry Grattan in Merrion Square, Dublin … he died 200 years ago in 1820 (Photograph: Patrick Comerford)

The 200th anniversary of the death of Henry Grattan passed virtually unnoticed earlier this summer. He died 200 years ago on 4 June 1820, and I was reminded of the man who gave his name to ‘Grattan’s Parliament’ and his contribution to the Irish tradition of parliamentary democracy when I saw his sculpture in Merrion Square, Dublin, earlier this month.

Grattan has been described as a superb orator and a romantic. He demanded that Ireland should be recognised as an independent nation, while remaining linked to Britain by a common crown and a shared, common political tradition.

Grattan was born at Fishamble Street, close to Christ Church Cathedral, Dublin, on 3 July 1746 and was baptised in the nearby church of Saint John the Evangelist.

His father was James Grattan MP, of Belcamp Park, Co Dublin, and his mother Mary was a daughter of Thomas Marlay, Attorney-General of Ireland, Chief Baron of the Irish Exchequer and Lord Chief Justice of the Court of King’s Bench.

He spent some years in London in the late 1760s and early 1770s, and he visited pre-Revolutionary France in 1771. In London, he attended debates in the House of Commons regularly, and he enjoyed visiting the celebrated Grecian Coffee House in Devereux Court, where he got to know Oliver Goldsmith.

After studying at the Middle Temple, London, and the King's Inns, Dublin, he was called to the Irish Bar in 1772, but was drawn into politics by Henry Flood. He first entered Parliament as MP for Charlemont in 1775, with the support of the ‘Volunteer’ Earl of Charlemont.

Grattan soon became the leader of the national party, and secured the passage by the British House of Commons in 1783 of an Act that declared: ‘Be it enacted that the right claimed by the people of Ireland to be bound only by laws enacted by his Majesty and the Parliament of that kingdom, in all cases whatever shall be, and is hereby declared to be established and ascertained for ever, and shall at no time be questioned or questionable.’

In September that year, Grattan became a member of the Privy Council of Ireland in September 1783, but was expelled in 1798 in a reaction to the 1798 Rising. He opposed the Act of Union in 1800, but later sat as an MP in the Westminster Parliament.

He was re-admitted to the Privy Council on 9 August 1806. He died at Portman Square, London, on 4 June 1820, and was buried in Westminster Abbey close to the tombs of Pitt and Fox.

Sydney Smith said of Grattan: ‘No government ever dismayed him. The world could not bribe him. He thought only of Ireland; lived for no other object; dedicated to her his beautiful fancy, his elegant wit, his manly courage, and all the splendour of his astonishing eloquence.’

Apart from the bust in Merrion Square, there are statues of Grattan in College Green, Dublin, outside the former Irish Parliament, and in the Outer Lobby of the Palace of Westminster. Grattan Bridge on the River Liffey in Dublin links Parliament Street and Capel Street, but is usually known as Capel Street Bridge.

Do you have the citation for the quote from smith ‘No government ever dismayed him. The world could not bribe him. He thought only of Ireland; lived for no other object; dedicated to her, his beautiful fancy, his elegant wit, his manly courage, and all the splendour of his astounding eloquence’ I would really appreciate this, I would like to use it in an academic essay. Thank you.