Persistence and faith
in the face of
prejudice and rejection 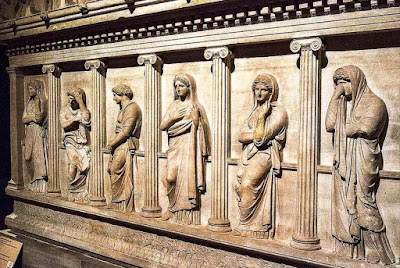 The Syro-Phoenician or Canaanite Woman … a modern icon by Brother Robert Lentz, OFM

Can you recall a moment, a place, or an occasion when you felt rejected? To be rejected I do not need to be an outsider. We can be rejected by our own brothers or sisters, by those who live around us, by those who share our religious or cultural values.

Can you think of how you feel when you are made to feel rejected, an outsider, sent away?

And, have you found yourself blaming yourself rather than those who reject or marginalise you?

In our first reading, Joseph has been rejected by his brothers and sold into slavery. But he refuses to accept that rejection. Instead, he prospers and attains the highest office in the land.

When eventually he meets his brothers, he gives them an ugly lesson in what it is to be rejected. But then he reveals who he is, and lets them know that they are not rejected, not even for what they have done to him.

He not only forgives them, but he also assures them that they have always been part of God’s plans for future generations, for the future … a future than we can own today.

As the psalmist reminds us, it is good when the members of the same family can live in peace and unity.

In the Gospel reading, once again, we encounter different types of rejection.

In the first optional part of the reading, which we did not hear this morning, some of the Pharisees and scribes reject the disciples because they do not observe the newly-innovated but by now accepted tradition of washing hands before touching food.

It seems sensible in these Covid-19 days, and it was then too. But that is not the point here. There are other reasons for rejecting the way people do things: for example, the prejudices they hold in their own hearts.

Despite experiencing this rejection, the disciples still go on to reject the Canaanite woman who is pleading for mercy.

Having been rejected themselves, the disciples come face-to-face with a woman they see as unclean and an outsider.

Having heard Pharisees suggest Jesus should reject them, they now say to Jesus, ‘send her away’ (verse 23).

But there is a paradox in their rejection of her, for they use a word (ἀπόλυσον, apoluson) that also means to set free, to let go, to give liberty to, to release.

The same verb is used to set a debtor free of debts, or to allow a woman to divorce her husband, setting her free from the bonds that tie husband and wife. In wanting to be free from her demanding calls, they – ironically – call for mother and daughter to be freed from their torments.

In our feelings of rejection and marginalisation, how do we find acceptance, liberation, and a place in God’s unfolding plan for his people, for all people, God’s future for us?

The disciples want to turn her away. They see her as a pest, a nuisance, a pushy woman, breaking into their closed space, their private area.

Christ and the Disciples are in the coastal area of Tyre and Sidon, an area of small villages, perhaps looking for a quiet break for a few days. But if they are planning to get away for a few quiet days, those plans are frustrated when this woman arrives with her pressing demands.

This is foreign territory, inhabited by Canaanites or Phoenicians, who were culturally Hellenised and mainly Greek-speaking. It is also the territory associated with Elijah, who raised the widow’s child from death (I Kings 17: 9-24) and who ‘was markedly open to foreigners.’

So, Christ could expect to find himself among a large number of Greek-speaking ‘Gentiles.’ Would the Disciples expect him to behave like Elijah and break all the rules in being open to them, taking miraculous care of a lone mother and her child?

The title of the play, The Phoenician Women, refers to the Greek chorus, which is composed of Phoenician women on their way to Delphi and who are trapped in Thebes by war.

The two key women in the play are Jocasta and her daughter Antigone, who have survived against all odds. They challenge the accepted concepts in Classical times of fate and free-will.

In the face of death, they refuse to accept what others see as their destiny, they refuse to be pushed aside, marginalised and dismissed as the men around then compete for power.

So, in Christ’s time, educated people could expect a Phoenician woman and her daughter to be pushy in the face of what appears to be a cruel fate, even if this involves confronting successful or ambitious men: they are prepared to stand up to kings and rulers, prepared to challenge them, and prepared to risk rejection and exile.

Faced with her daughter’s needs, this woman ignores the disciples: she is direct and aggressive in demanding healing and justice. And in demanding justice and healing for her daughter, she is, of course, demanding these for herself too.

Nothing is said about the response of the disciples to the woman. They had been trying to push her away, despite her crying, her tears, her distress, her plight over her daughter.

Perhaps nothing is said about the response of the disciples … because we are the disciples. How do you and I respond to encounters like this?

As a social response, for example, we might consider that the confrontation is an illustration of how we might respond to the needs of strangers and foreigners.

Do we find them pushy and demanding?

How do we respond when the foreign woman in our society wants the same treatment in hospital as an Irish-born child?

How do we respond when foreigners who are more open and joyful in conversation, appear to be encroaching on our privacy on the bus, on the street or in a shop?

Are we like the Disciples, and want to send them away? Or are we like Jesus, and engage in conversation with them?

Do we think we have some privileges that should not be shared with the outsider and the stranger?

How do we respond to people who are pushy and continue to demand care for their children in the face of society’s decision to say no?

But this Gospel story also raises questions at a personal, spiritual level too, when it comes to matters of faith.

How many people do you know who give up when they turn to God in prayer and find those who are supposed to represent Jesus appear to turn them away?

How many times have I dismissed the needs and prayers of others because they appear to be outside the community of faith as I understand it?

This woman is insistent, she is persistent; she refuses to accept what other people regard as her fate and destiny.

In the end, she receives the mercy and help she asks for, and much, much more … she is commended in front of the disciples for her faith, and her daughter is healed instantly.

We do not have to accept misery and rejection, especially when others see them as our fate or our destiny. And, in simple prayers, we may find more in the answer than we ever ask for. 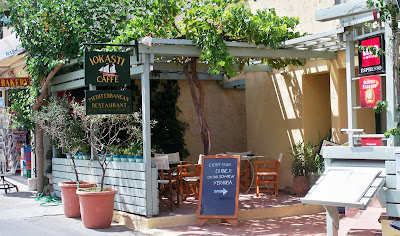 21 Jesus left that place and went away to the district of Tyre and Sidon. 22 Just then a Canaanite woman from that region came out and started shouting, ‘Have mercy on me, Lord, Son of David; my daughter is tormented by a demon.’ 23 But he did not answer her at all. And his disciples came and urged him, saying, ‘Send her away, for she keeps shouting after us.’ 24 He answered, ‘I was sent only to the lost sheep of the house of Israel.’ 25 But she came and knelt before him, saying, ‘Lord, help me.’ 26 He answered, ‘It is not fair to take the children’s food and throw it to the dogs.’ 27 She said, ‘Yes, Lord, yet even the dogs eat the crumbs that fall from their masters’ table.’ 28 Then Jesus answered her, ‘Woman, great is your faith! Let it be done for you as you wish.’ And her daughter was healed instantly. 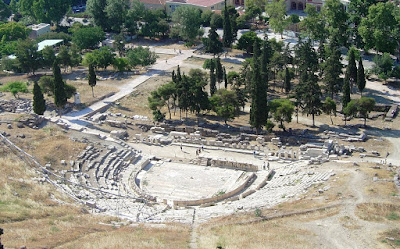 The Theatre of Dionysus, beneath the slopes of the Acropolis … the tragedies and comedies of the great playwrights, Euripides, Aeschylus and Sophocles were first performed here (Photograph: Patrick Comerford)

Almighty God,
you have given your only Son
to be for us both a sacrifice for sin
and also the example of godly life:
give us grace that we may always thankfully receive
the benefits of his sacrifice,
and also daily endeavour
to follow the blessed steps of his most holy life;
through the same Jesus Christ our Lord.

O God,
as we are strengthened by these holy mysteries,
so may our lives be a continual offering,
holy and acceptable in your sight;
through Jesus Christ our Lord.

The theatre in Epidavros … ‘The Phoenician Women’ by Euripides was performed here regularly in recent years (Photograph: Patrick Comerford)