Church of Christ the King in Cork,
influenced by Frank Lloyd Wright 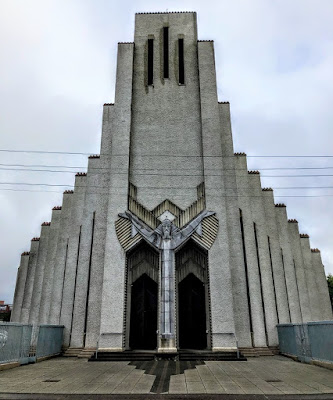 The Church of Christ the King, Turner’s Cross, Cork … Francis Barry Byrne was influenced by Frank Lloyd Wright and pioneering in the use of concrete instead of brick or stone (Photograph: Patrick Comerford, 2020)

The Church of Christ the King in Turner’s Cross on the south side of Cork, is one of the most striking 20th century church buildings in the city. The architect, Francis Barry Byrne (1883-1967), was strongly influenced by Frank Lloyd Wright, and the large sculpture of Christ the King by John Maguire above the entrance is a landmark work of public art.

As part of the second stage of this year’s summer ‘Road Trip,’ before I left Cork I visited the Church of Christ the King. The was the first and one of the few Irish churches designed by a US architect, and the first Irish church built with concrete instead of brick or stone. It has a seating capacity of 1,200 and has one of the largest suspended-ceilings in any church in Europe.

The church was commissioned in 1927 by Bishop Daniel Cohalan of Cork and designed by the Chicago-based architect Barry Byrne. The church was built at a cost of £30,000 by John Buckley in 1929-1931 and opened on the Feast of Christ the King, Sunday 25 October 1931.

The Feast of Christ the King was then a recent innovation in the Church calendar. It was first suggested at the end of 1925 when Pope Pius XI published an encyclical, Quas Primas, in which he castigated secularism in Europe and declared that the secular powers ought to recognise Christ as King and that the Church needed to recapture this teaching.

At the time, the entire idea of kingship was quickly losing credibility in western societies, not so much to democracy but to burgeoning fascism – Mussolini was in power in Italy since 1922, and a wave of fascism was about to sweep across central Europe.

Since 1925, the celebration of Christ the King or the Kingship of Christ has become part of the calendar of the wider Western Church. It took on an ecumenical dimension from 1983 on with its introduction to Anglicans, Lutherans, Methodists and others through the Revised Common Lectionary. 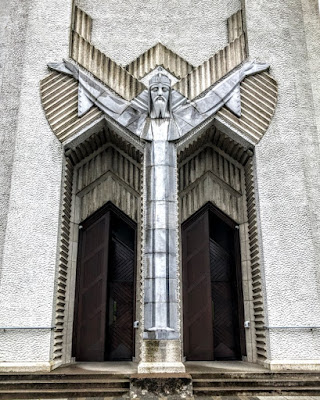 The large sculpture of Christ the King by John Maguire above the entrance to the church (Photograph: Patrick Comerford, 2020)

By the mid-1920s, the South Parish in Cork city had grown in both population and area to a point where it could no longer function with a single church. To address the situation, Bishop Daniel Cohalan of Cork designated Turner’s Cross as the location for a second parish church to serve the growing population.

The Cork Examiner reported that Dr Cohalan originally planned a more standard design by an Irish or British architect, but the cost had proved ‘well-nigh prohibitive.’ He changed his mind when he read an article by Barry Byrne, a former student of Frank Lloyd Wright.

Byrne had already designed three Catholic churches in the US, and all had received acclaim and criticism for their bold and innovative designs. He was well-known too for regular contributions on church design to publications such as Commonweal.

Byrne was born on 19 December 1883. His father, Charles Emmett Byrne, a native of Prince Edward Island, was a railroad blacksmith. His mother, Mary Barry Delaney, was from Chicago, with family connections with Co Wexford.

When Byrne visited an exhibition of Frank Lloyd Wright’s work in Chicago in 1902, he was offered a place at Wright’s Oak Park studio as an apprentice tracer. Although he had little formal education, Wright saw in Byrne the same raw love and enthusiasm for architecture he too had experienced in his youth.

Byrne established his own practice in Chicago in 1915. His first large building contract was in 1921 for the Immaculata High School, Chicago. This was followed by the Church of Saint Thomas the Apostle in Chicago.

His wife Annette Cremin regularly drew artist’s impressions of his designs and in some cases designed the interior colour schemes for some of his buildings and churches. 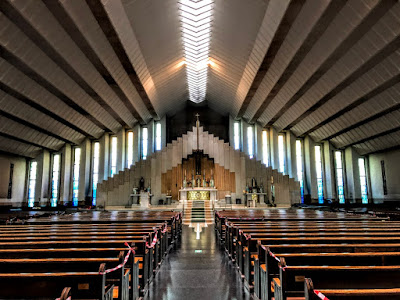 Inside the Church of Christ the King, facing the east end (Photograph: Patrick Comerford, 2020)

Ireland must have seemed to be inward looking and very traditional in the 1920s, and the idea of a futuristic design by a foreign architect would have fomented strong opposition. But this was only the first of many problems to come.

The first model for the church was based on a brick exterior and interior, with a suspended wooden ceiling. It was a development of a previous design by Byrne for a church also dedicated to Christ the King in Tulsa, Oklahoma (1926), and represented a more economic solution, typically used in the US.

However, this design was subject to an overall cost restriction of £30,000 with £20,000 allocated for the building and the remaining £10,000 kept for the inner furnishings.

After investigations, the site supervising architect, JR Boyd Barrett, reported that a brick and wood church could not be built on a £20,000 budget and he suggested a complete concrete construction with plaster ceiling would be more realistic.

Although reluctant to sacrifice the brick and wood design, Byrne reworked his solution to use concrete as the main construction material. The result would involve the use of large sections of moulded concrete re-enforced for strength. Decorative features around the doors and windows would all be made from cast stone, and the stone mason was not a consideration.

The reconfigured model was a new departure in Byrne’s style and the Church of Christ the King became the first Irish church ever built from concrete. The innovative design and its use of concrete may have been the first large-scale application of re-enforced concrete construction in Ireland. At the time, ready-mix cement was unheard of, and the project involved a complete shake-up for the building industry in Ireland.

Before building work began, Barry Byrne and his wife, Annette Cremin Byrne, visited Cork to view the site and to discuss the final details of the project with Dr Coholan.

Work began in March 1929 and the foundations were blessed by Dr Cohalan on 21 July. The Initial problems were with the foundation. The soft marsh-like terrain of the site was no match for the heavy foundation. Before any walls could be erected, the building contractor, John Buckley, had to sink foundations 15 ft to reach a solid base, well above the 5-6 ft estimated by Byrne.

Other issues included strong opposition from the Society of Stone Cutters and Marble Masons. Their anger related to the selection of concrete as a base material and they instructed that the foundation stone ‘shall not be worked, as the building of the said Church is detrimental to our trade.’ 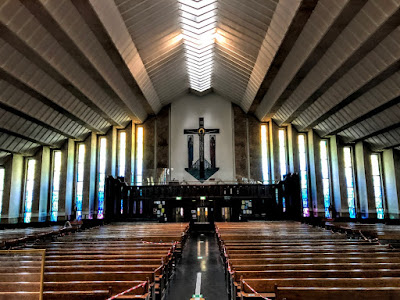 Inside the Church of Christ the King, facing the west end (Photograph: Patrick Comerford, 2020)

A general building trade strike from May to August 1930 caused significant delays for the project. But the church still opened on time on the Feast of Christ the King, 25 October 1931. However, there is evidence of a too-hasty completion: terrazzo panels were missing on the altar reredos, the Stations of the Cross were unfurnished and an external fence was not erected for some time.

When it was completed, the church never provoked much admiration or criticism. Yet, in that years that followed, many buildings influenced by the style of Frank Lloyd Wright were built in Ireland, although church architecture in Britain and Ireland largely ignored these new styles. However, the choice of concrete as a raw material became a major influence.

Byrne was pleased with the results that he never again chose brick as his preferred material. His later churches perfected the use of concrete as a more versatile material and as a cheap alternative to brick.

The original tender submitted by John Buckley was for £20,000. The costs for the internal furnishings, including seats and marble, terrazzo and other fittings, amounted to £7,000, with the total cost at £27,000. A significant contribution of £10,000 from the Geary family foundation provided much needed support to pay off the debts.

A local sculptor, John Maguire, was contracted to build the large sculpture of Christ the King that stands over the entrance. The statue was designed by the American sculptor John Storrs and the final work was based on plaster models shipped from Storrs home in France to Cork. Maguire also worked on the marble altars and gold mosaics.

The marble terrazzo work was carried out by JJ O’Hara & Co. Dublin. This includes the black floor surface and lower wall, beige dado rail and all white marble surfaces in the sanctuary and at the reredos. The terrazzo work is said to be the first of its kind in Ireland.

Piggot & Co furnished the Mannborg Model 40 organ fitted in the concealed choir gallery, glazing and painting work was by JF O’Mahony of Cork, and the bell was supplied by Gillett and Johnston of Croydon.

It is surprising, then, that Byrne never saw the finished building in person, and it remains his only church where he did not personally supervise the construction.

Bishop Cornelius Lucey designated Turner’s Cross an independent parish in 1957. At the same time, five new churches were built in Cork, including a church for the newly formed parish of Ballyphehane.

As for Barry Byrne, he moved to New York in the early 1930s and supplemented his limited work as a building inspector and by writing articles for various publications. At the age of 62, he returned to Chicago in 1945. He died in 1967.

The church was rededicated by Bishop John Buckley on 25 May 2002, at a ceremony presided over by Cardinal Cormac Murphy O’Connor, Archbishop of Westminster. Meanwhile, however, with the formation of new parishes, the Church of Christ the King would never again serve the huge masses for which it was commissioned. However, its design and craftsmanship have stood the test of time, and the church retains most of its original character and layout. 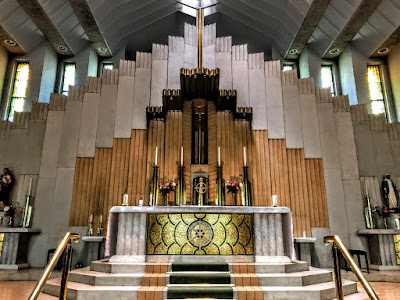 The sanctuary and high altar in the Church of Christ the King (Photograph: Patrick Comerford, 2020)