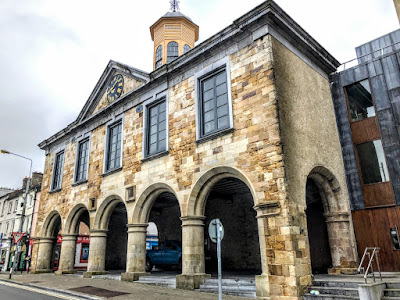 The Main Guard, Clonmel … built as the Palatinate Court of the Dukes of Ormond (Photograph: Patrick Comerford, 2020)

On the way from Cork to Kilkenny, the second phase of this year’s ‘Road Trip’ brought us to Clonmel in south Co Tipperary. The town grew significantly in mediaeval times, and there are many reminders of the middle ages throughout the streets of Clonmel. A small section of the town walls can still be seen at Old Saint Mary’s Church, which dates from the 14th century or earlier.

We arrived into Clonmel through the mediaeval walls at the West Gate, a 19th-century reconstruction of an older building. Originally, there were three gates in the walled town – north, east and west – while the south was protected by the River Suir and the Comeragh Mountains. The area to the west of the town is known as Irishtown.

Two of us stopped for lunch in O’Connell Street, the main street in Clonmel, which is bookended by two prominent, landmark buildings: the West Gate at the west end and the Main Guard at the east end.

The West Gate is an open arched entrance onto O’Connell Street, and the current structure dates from 1831, when it was built by a merchant named Joyce. This is a Tudor Revival style structure and is an imposing feature, dividing the vistas from O’Connell Street and Irishtown.

The West Gate fell into disrepair in the 20th century, prompting local concerns for its restoration. It was re-roofed, the arches were re-enforced with steel beams and the floors were stabilised with steel. Notable features include the crenellations, turret and label-mouldings. 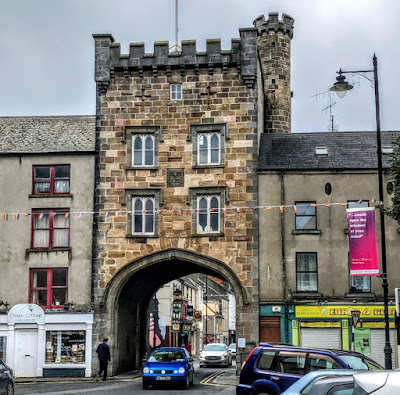 The West Gate, Clonmel … built in 1831 at the site of one of three town gates (Photograph: Patrick Comerford, 2020)

At the east end of O’Connell Street, the Main Guard is the former courthouse in Clonmel. It was here that the ‘main guard’ of the troops in Clonmel were once stationed.

During the Siege of Clonmel in 1650, the old Manor Court was destroyed. After the restoration of the Palatinate rights of James Butler, Duke of Ormonde, in Co Tipperary in 1662, he ordered the building of a new courthouse.

This fine, two-storey, symmetrical building, incorporating some elements from works by Sir Christopher Wren, was completed in 1674. The building also included private apartments, a dining room and drawing room. These were used to entertain King James II in Clonmel in 1689. The building was also used as a ‘tholsel’ for gathering tolls, duties or customs.

The Palatinate jurisdiction of the Dukes of Ormond in Co Tipperary was extinguished in 1715. After that, the building was used by the Clonmel Assizes, and it was there that Father Nicholas Sheehy, the anti-Penal Laws agitator, was tried in 1766. He was hanged, drawn and quartered.

When the new courthouse was built in 1810, all trials were moved from the Main Guard and the building became a barracks. Pigot’s Commercial Dictionary noted in 1820 that the building ‘is devoted to the use of the soldiery, possesses a good clock, is known by the name of the Main Guard and stands at the entrance into Main Street,’ now O’Connell Street.

The ground floor loggia or arcade of open arches was converted into shops around then, the basement was excavated and additional floors were inserted, so that the former courthouse became a market house. For a number of years, the arches were hidden, as Samuel Lewis noted in 1837, ‘The ground floor has some years since been converted to shops.’

The Office of Public Works began an award-winning restoration in the 1990s, and the open arcade of sandstone columns and five semi-circular arches is once again an attractive feature of the streetscape.

Today, the Main Guard is a five-bay two-storey building, with an arcaded ground floor and with classical elements, such as the pediment. The columns were recycled from the ruins of Inislounaght Abbey. The building has a handsome clock and bell tower, and the west wall displays the coats of arms of the Borough of Clonmel and of the Ormond Butlers, both bearing the date 1675.

The Main Guard is closed at present, but is normally open to visitors from March to late October. 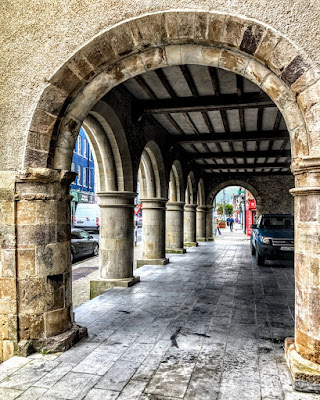 The Main Guard has an open arcade of sandstone columns (Photograph: Patrick Comerford, 2020)