How the former church in
Villierstown has survived
changes and closure 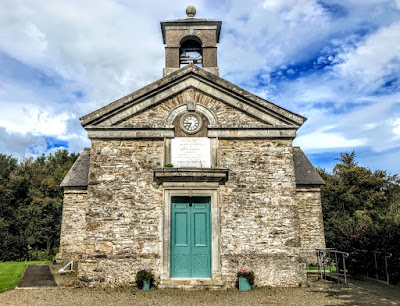 While I visited Cappoquin, Co Waterford, last month on the first leg of this year’s ‘Road Trip,’ I visited two churches in the area that no longer serve as churches in the Church of Ireland: the church ruins at Affane, close to the entrance to Dromana House, and the former church in Villierstown, built as part of the Villiers Stuart estate.

Villierstown is on the banks of the River Blackwater in west Waterford, about 8 km south of Cappoquin. The village was founded by the Villiers-Stuart family, who give the place its name. The family and their direct ancestors have lived in Dromana House in its different forms for over 700 years, making it one of the oldest family estates in Ireland up to the 20th century.

John Villiers (1684-1766), 1st Earl Grandison, established the village in the 1740s to develop a linen industry. The original village consisted of a church, a rectory, a school, 24 houses, a court, a police barracks and a quay on the river. It was initially populated with linen-weavers, some of whom were from Lurgan, Co Armagh.

There were just 16 churches in repair in the Diocese of Lismore in 1746. But the religious landscape on the Dromana estate was changing. Grandison decided to build a new church to serve the new village and its new residents. The new chapel was built in the Queen Anne style 1748, and the interior fittings, including the seats, pulpit and altar, all in oak, were installed by 1755. The finished chapel could accommodate about 400 people, and by 1757 regular Sunday services were being held.

Two cut-limestone steps lead up to the square-headed front door and narthex. The cut-limestone doorcase with a cornice on a pulvinated frieze frames timber panelled double doors.

Inside, the full-height choir gallery stands on fluted cast-iron Doric pillars, and there is a moulded plasterwork cornice at the coved ceiling. The notable features include the coupled windows showing conventional Georgian glazing patterns, and the chancel has a classically-detailed Venetian window.

The bellcote embellishes the pedimented roof. The clock over the front door was erected in 1910 by Mary Villiers-Stuart of Dromana as a gift to the people of Villierstown ‘to whom she was deeply attached.’ 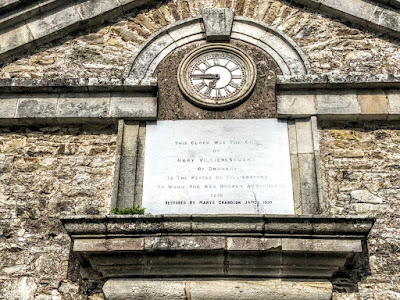 The clock on the façade was donated by Mary Villiers-Stuart (Photograph: Patrick Comerford, 2020)

The church was completed in 1748, but remained outside the parochial and diocesan structures of the Church of Ireland. It was a ‘chapel of ease’ and marriage services, for example, could not take place there without a special licence.

The chapel was endowed by John Fitzgerald Villiers, 1st Earl Grandison, in his will in 1763. His personal chaplain, the Revd Francis Green, became the first Chaplain of Villierstown. The chaplain was to provide ‘divine service’ and catechise but he had no parochial district and the village of Villierstown remained part of the parish of Affane and Aglish.

While Green was chaplain of Villierstown, he was also a Vicar Choral of Lismore Cathedral and Vicar of Tallow. He died in February 1768.

There are no records of chaplains in Villierstown from 1768 until 1781, when the Revd Michael Greene was chaplain of Villierstown. The chaplaincy first appears in the bishops’ visitation books in 1784.

Later chaplains include the Revd Harris Oldfield, who married Ann Greatrakes from Affane, from the family of Valentine Greatrakes, the healer known as ‘The Stroker.’ One their daughters, Charlotte, married the next chaplain at Villierstown, the Revd Thomas Sandiford (1818-1820). 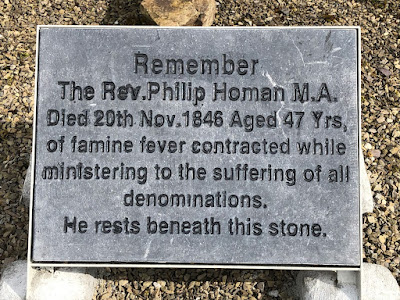 Philip Homan died of Famine Fever on 20 November 1846 while ministering to the sick of all denominations. He was regarded as a saintly man and was mourned by rich and poor alike who attended his funeral in large numbers. He is buried in a vault below the altar in the church and a memorial tablet in Saint Carthage’s Cathedral, Lismore, describes him as a religious scholar and a benefactor of the poor in times of distress.

After Philip Homan died, Lord Stuart de Decies sought to appoint a successor, but was opposed by the Bishop of Cashel, Waterford and Lismore, Robert Daly. A protracted argument ensued, with Bishop Daly insisting he had the final say on all clerical appointments.

Eventually, the Revd Hans Butler was appointed in 1847, and remained until 1886. He also a Vicar Choral of Lismore Cathedral (1839-1850). During his time at Villierstown, Affane Parish, which included Villierstown, was united with Cappoquin in 1874.

The Revd Richard Bartlett Langbridge (1886-1887) had been headmaster of Dartford Grammar School (1870-1876), a missionary in Chile and a consular chaplain in Montevideo, Uruguay, before coming to Villierstown.

The Revd William Henry Rennison (1904-1914) was also curate in Cappoquin and chaplain at Villierstown. He became the Rector of Ardmore in 1914, and Rector of Portlaw in 1921. He compiled the Succession List of Bishops, Cathedral and Parochial Clergy of the Dioceses of Waterford and Lismore (1920), and published a series of papers in the Journal of the Cork Historical and Archaeological Society on the early 17th century history of the Diocese of Waterford and Lismore.

He was 52 when he died in 1937 on a family holiday in Annestown near Tramore.

The Revd Charles Geoffrey Nelson Stanley (1914-1916) was a former curate of Tramore before becoming curate of Cappoquin and chaplain of Villierstown. Later, he became Dean of Lismore in 1934. Lismore and Cappoquin were united in 1955. He retired in 1960 and died in 1977. 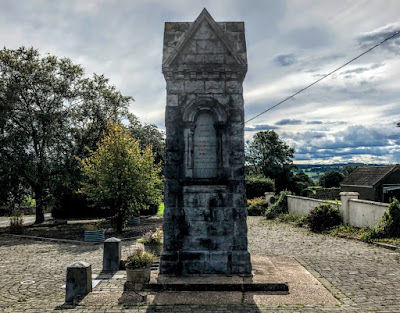 The Villiers-Stuart fountain on the Green opposite the church (Photograph: Patrick Comerford, 2020)

The glebe land in Villierstown was sold in 1941 and the money was transferred to a diocesan endowment fund. The Villiers-Stuart family also donated another parcel of land near Villierstown.

Sunday attendance figures had dropped to about six by 1955, and the chapel closed in 1958. A church commission recommended removing the roof and capping the walls, retaining the porch as a mortuary chapel for the churchyard. But the Villiers-Stuart family was unhappy and James Henry Ion Villiers-Stuart (1928-2004) donated the church to the village in 1965 to prevent it from ‘falling into disrepair and ruin.’

After a meeting with the Roman Catholic bishop, Dr Daniel Cohalan, it was agreed that it would become a church for the Catholic villagers. It was the first time a Church of Ireland church was given to a Roman Catholic parish. The gift was welcomed by Bishop Cohalan and the parish priest, Father Hackett. A local committee raised £1,500 for its adaptation as a Catholic church.

However, Bishop Cohalan and Father Hackett died within weeks of each other. Their successors, Bishop Michael Russell and Father Quinlan, were less than enthusiastic, and decided the three existing churches were enough for the parish. 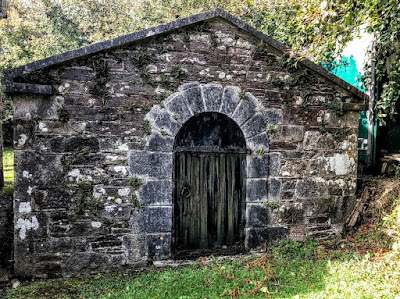 The Villiers-Stuart vault behind the church (Photograph: Patrick Comerford, 2020)

The building continued to deteriorate, and the furnishings were removed by the Dean of Lismore. In the late 1960s, the parish of Aglish transferred the church to Helen Villiers-Stuart, then living in Dromana House and some work was carried out with the assistance of the State Training Agency (AnCO). President Erskine Childers visited Villierstown in 1974 and dedicated the chapel for ecumenical use.

When Helen Villiers-Stuart died in 1986, her family agreed to transfer the church to a charitable trust in the hope of securing its future. Some improvements were made, the central crossing of the roof structure was replaced, the building was rewired, and toilets and heating were installed.

However, in the decades that followed, many members of the local trust died. A new Villierstown Church Company was formed by the three remaining trust members and four new members were added. Despite decades of neglect, much of original form and fabric of the chapel, outside and inside, survive, including the glazing panels in the windows. The clock on the church façade was restored by Mary Villiers-Stuart’s grandson, James Villiers-Stuart, in 1990. 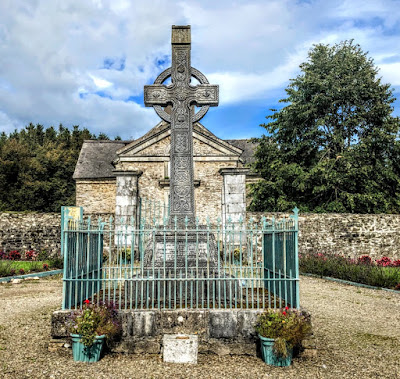 The Celtic Cross in front of the former church in Villierstown (Photograph: Patrick Comerford, 2020)

The inscription on the limestone Celtic cross in front of the church gates reads: ‘To Henry Villiers Baron Stuart de Decies Died January 23rd 1874 and to his wife Therse Pauline Lady Stuart de Decies who died August 7th 1867. This monument is erected by their son in affectionate remembrance. Blessed are the dead that die in the Lord.’

On the opposite side of the street, on a prominent corner site on the Green, an elegant memorial fountain dates from 1910 and remembers members of the Villiers-Stuart family. It is an attractive landmark in the village.

The church in Villierstown built by Lord Grandison in 1748 is now an arts, entertainment, community and wedding venue. It remains an important part of the mid-18th century ecclesiastical and architectural heritage of Co Waterford. 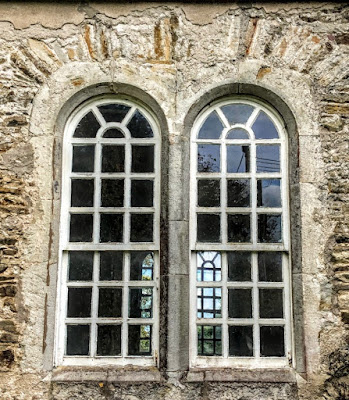