Liscarroll Castle, now in
ruins but once the third
largest castle in Ireland 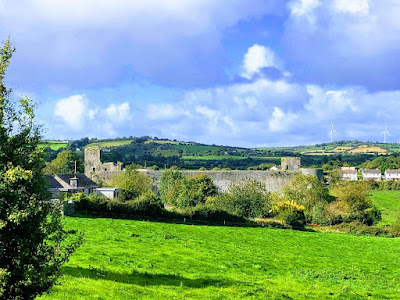 I have started to learn to take Fridays off. In recent weeks, I have used these opportunities to visit Cahir, Co Tipperary, and Cobh and Spike Island in Co Cork.

So, as the weekend began, two of us decided to return to Liscarroll, Co Cork, which is about 40 minutes or 50 km south of Askeaton, and to Buttevant, to see their mediaeval castles and streetscape.

Liscarroll is near Buttevant, about 3 km south of River Awbeg, and the remains of Liscarroll Castle, a large 13th-century Hiberno-Norman fortress, tower above the village.

Liscarroll takes its name from the O’Carroll Clan, although the village and castle owe its strategic importance to the de Barry or Barry family, who held extensive lands throughout Co Cork after the arrival of the Anglo-Normans, including Castlelyons, Barryscourt and Buttevant.

The sieges of Liscarroll and an important battle there on 3 September 1642 brought to an end to the strategic importance of the castle after 300 years, although there are few accounts of its earlier history. 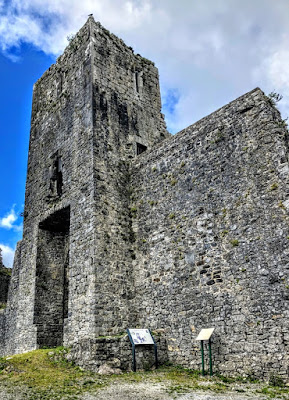 Liscarroll Castle was built by the Barry family in the 13th century (Photograph: Patrick Comerford, 2020)

Local accounts say Liscarroll Castle, like many other Anglo-Norman castles in Ireland, was built by to King John. But it seems more likely that the Barry family was involved in building it.

Philip de Barry, who came to Ireland with his uncle Robert FitzStephen, acquired extensive lands in Munster and built many castles. His son, William de Barry, had a grant confirming his father’s lands from King John in 1206.

His son, Robert, and his grandson, David Oge were the founders of monastic houses later in the 13th century at Ballybeg, Buttevant and Cork. David Oge de Barry or his descendants may have built Liscarroll Castle later that century.

The castle became the most important military building in Co Cork in the 13th century the third largest castle of its time in Ireland, after the castles in Trim and Ballintubber.

The castle stands on an outcrop of rock that projects into swampy immediately north of Liscarroll. The outer defensive walls enclose a quadrangular area measuring 62 metres from north to south.

The curtain walls – with an average external height of 8.5 metres – have strong batters below this level at the base, extending outwards from the rock foundation which is exposed in a number of places. In several places, the quarried rock makes the walls look higher and stronger.

All the towers had basements of two upper storeys, with the main entrances on the first-floor levels, and with timber floors. Circular stairways rose from these entrances to the upper floors and there was a wall-walk or allure about the same level as the present wall tops. Each of the remaining towers has three narrow loops set in wide internal embrasures at the main floor level and the presence of corbels near the top of the south-west tower externally indicates that the walls were once crowned by parapets projections in places.

The south-west tower was roofed between four gables within the allure and all the towers rose a storey in height over the curtains.

There are two other towers both of rectangular form. The smaller projects outwards from the centre of the north curtain. Its thick walls surround a rectangular well-like space locally known as the ‘Hangman’s Hole.’ 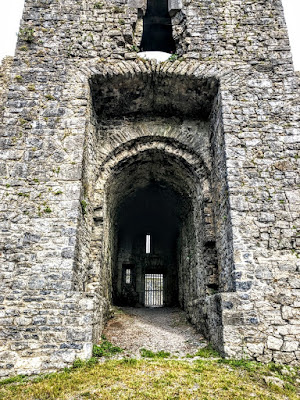 The largest and most important tower in Liscarroll Castle is the gate building in the centre of the south curtain (Photograph: Patrick Comerford, 2020)

The largest and most important tower is the gate building in the centre of the south curtain. It measures 12 metres from north to south by 7 metres in width and projects about 2 metres south from the curtains east and west of it.

This may be the lower part of the gate-building, and, although it has been altered, it is typical in some respects of the similar rectangular structures dating from the first half of the 13th century, before wide twin-towered gatehouses came into fashion.

It appears to have had an external gate set in the deep outer recess and a portcullis was set in from the exterior face. A second, strong gate behind the portcullis opened inwards, and there may have been a drawbridge too. Two ‘murder holes’ pierce the main vault just in rear of the outer gate.

While the lower part or the gate-building is ancient, the blocking wall of the inner archway and the whole upper part of the structure appear to be not earlier than about 1500.

Sir Philip Perceval loaned large sums of money to Sir John Barry in the early 17th century and acquired Liscarroll in the foreclosures and confiscations in 1625.

In 1647, 20 years after Perceval had moved to recover the debt, John Barry admitted, ‘I owed Perceval more than my estate or neck is worth. I am certain it was not so when I indebted myself to him.’

Perceval lost Liscarrol Castle again in 1642. On 20 August 1642, during the Confederate War, General Gerald Barry advanced with 7,000 men from Limerick to Liscarroll Castle. But the 80-year-old general was so slow and indecisive that it took him 12 days to take the castle, even though the force that held it was comparatively small.

Murrough O’Brien, Earl of Inchiquin, advanced from Cork with a greatly inferior force, intent on taking the strategically important castle for the Parliamentarians. In the early stages of Inchiquin’s attack, Barry’s force mistakenly thought they had routed their opponents and began looting and pillaging. This gave Inchiquin a critical opportunity to gather his men for a desperate shattered but failed to defeat the Confederate force.

Other attacks over the next few days resulted in the Parliamentarians taking control of Liscarroll. In 1645, the Earl of Castlehaven retook Liscarroll Castle and other castles in the area for the Irish Confederates.

However, in 1650, Sir Hardress Waller, the regicide, of Castletown, Co Limerick, attacked Liscarroll Castle with artillery and blew a gap in the west wall. Despite these sieges and battles, the castle remained in hands of the Perceval family for almost 250 years, and passed to their descendants, the Earls of Egmont, who held it until the end of the 19th century. 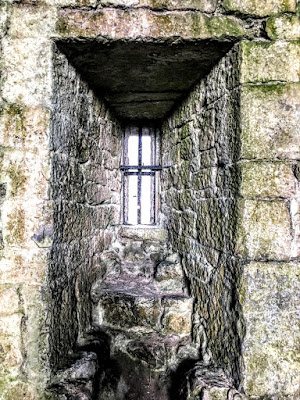 Many of the castle structures were still in existence in 1750.

Another member of this family, Spencer Perceval (1762-1812), was Attorney General, Chancellor of the Exchequer and First Lord of the Treasury before becoming Prime Minister in 1808. Four years later, he was assassinated in the lobby of the House of Commons, the only British Prime Minister to have been assassinated.

Meanwhile, the fortunes of the Perceval family and the Tierney family became entwined in the Regency period. Dr Matthew Tierney from Rathkeale, who had a practice in Brighton, was credited with saving life of the Prince Regent in 1820.

His brother, Edward Tierney, was introduced to the Countess of Egmont, Bridget Wynn, daughter of Glyn Wynn and wife of John Perceval, 4th Earl of Egmont. Lady Egmont and her son Henry later became the sponsor at the baptism of Edwrad Tierney’s son, who was named Perceval Tierney.

Lord Egmont appointed Edward Tierney as the agent for his Irish estates in 1823, including Liscarroll Castle and thousands of acres around Churchtown and Kanturk in north Cork. Tierney was an able manager and he transformed the estate with great improvements.

John, 4th Earl of Egmont died on 31 December 1835 and was succeeded by his only son, Henry, who was godfather of Sir Edward Tierney’s son. But Henry Perceval (1796-1841), 5th Earl of Egmont, was known for his drunkenness and loose living. When he died in 1841, He had no heir and he left all his estates to his agent, Sir Edward Tierney. The family titles passed to his distant cousin, George Perceval (1794-1874), 3rd Lord Arden, who became 6th Earl of Egmont without receiving one penny from his ancestral estates.

Around this time, the castle was the subject of a piece of doggerel written in 1854 by Callaghan Hartstonge Gayner that ends:

Beneath its folds assemble now, and fight with might and main,
That grand old fight to make our land ‘A nation once again,’
And falter not till alien rule in dark oblivion falls,
We’ll stand as freemen yet, beneath those old Liscarroll walls. 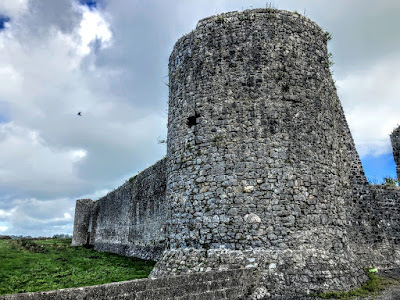 ‘We’ll stand as freemen yet, beneath those old Liscarroll walls’ (Photograph: Patrick Comerford, 2020)

Sir Edward Tierney died on 4 June 1856 at the age of 76, and left his estates to his son-in-law, the Revd Sir Lionel Darrell. The sixth earl went to court against Darrell to recover the estates in a remarkable case before the Summer Assizes at Cork in 1863. After four days, the case was settled. Egmont recovered Liscarroll Castle and his and his ancestral estates, but Darrell was awarded £125,000 and costs.

An unsuccessful attempt was made to overthrow the west curtain wall in 1920, but it remained standing, although in an unstable state.

The Commissioners of Public Works became the guardians of Liscarroll Castle a National Monument in 1936, and the Office of Public Works has carried out extensive repairs since then.

During this restoration work in the 20th century, a bronze harp-peg was found in a hole in the upper part of the south-west tower. The peg is now in the National Museum of Ireland in Dublin.

Before leaving Liscarroll, we visited the small mediaeval churchyard. Only the gable wall of the mediaeval church survives, and while there are many graves from the 17th and 18th centuries, we could find none belonging to the Perceval and Tierney families.

We continued south to Buttevant, but the story of the Tierney family seemed worth returning to and retelling after the weekend. 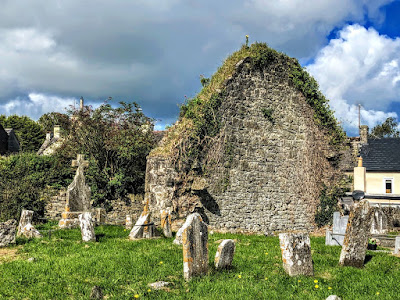 The gable wall is all that survives of the mediaeval church in Liscarroll, Co Cork (Photograph: Patrick Comerford, 2020)

That was very interesting; thank you.

I wonder whether you might spend one of your Fridays having a look at Athassel Priory, south of Golden. I've visited it https://irishwaterwayshistory.com/abandoned-or-little-used-irish-waterways/waterways-of-the-south-east/the-top-of-the-suir/the-stones-of-athassel/, but your views would be better informed than mine.