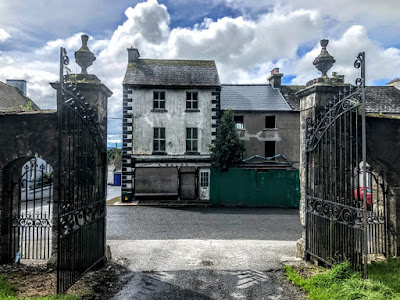 The entrance to Cappoquin House looking out on the shopfronts of Main Street at the junction with Green Street (Photograph: Patrick Comerford, 2020)

If the Market House and the Square have been at the heart of social and economic life in Cappoquin, Co Waterford, for almost 400 years, then the oldest streets in Cappoquin are probably Main Street, Church Street, Castle Street and Mill Street, which all developed as the early town expanded in the 1700s.

Main Street in particular has always been the heart of commercial Cappoquin, although trading patterns have changed considerably since I was a small child in the 1950s. In those days, the town had 22 registered grocers and seven drapers, most of them on Main Street and the streets that lead onto it.

Many shopfronts still seen on Main Street date from the early 19th century, and as I walked around Cappoquin during my late summer ‘Road Trip’ a few weeks ago, many of those shopfronts remained familiar. 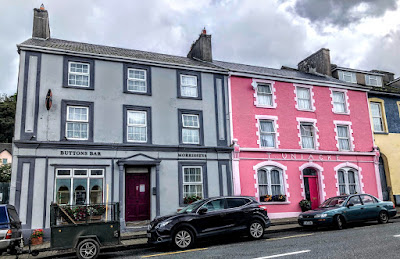 The colourful shopfronts in Cappoquin are testimony to the careful town planning of the Keane family (Photograph: Patrick Comerford, 2020)

Although some of the names have changed in the intervening decades, and many of the shops have closed, many of the people associated with them come back to life in my mind’s eye.

The three-storey grandeur – albeit it fading grandeur at many premises – of many of the façades and shopfronts on Main Street shows how wealthy the town was in the 19th century, with ground space at a premium, and the Keane family of Cappoquin House exercising a positive, benign influence on how the town and its commercial life developed. 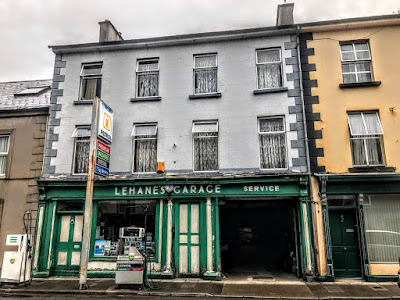 Lehane’s is the longest-standing garage and filling station in Cappoquin (Photograph: Patrick Comerford, 2020)

As the busiest and traditionally most populous street in the town, Main Street has been home to many great figures of the locality. It was here too that traditional businesses like Moores and Conway’s Hotels, along with Kingstons, Stanleys, Hicks and Mansfields flourished until the latter half of the 20th century.

Lehane’s remains the town’s longest-standing garage and filling station, and was photographed in a recent photo-feature in the Guardian (February 2018), when I was interviewed about my childhood memories. 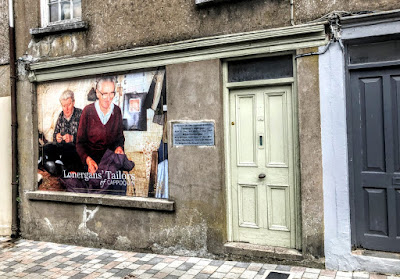 The Lonergan brothers worked in their own shop window (Photograph: Patrick Comerford, 2020)

Few families have been as synonymous with Cappoquin as the Lonergans, who set up a tailoring business in Main Street in the 1920s. The shop has doubled as a focal point for hurlers, and the brothers Thomas Lonergan (1927-1999) and Noel Lonergan (1929-2011) are remembered for sitting in their shop window as they toiled away at their trade. They were also known as beekeepers.

The premises next door was once the Jubilee Nurse’s House, maintained by the Richard Henry Keane Memorial Fund. 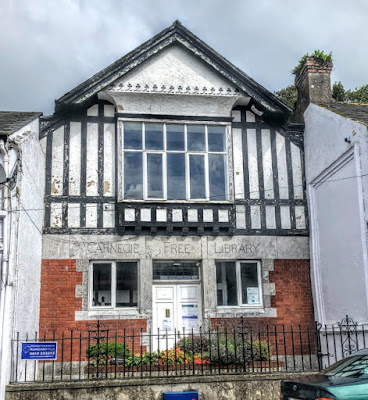 The Carnegie Library was designed in the Arts and Crafts style by George Patrick Sheridan and built on a site donated by Sir John Keane (Photograph: Patrick Comerford, 2020)

The town’s Carnegie Free Library was designed by the architect George Patrick Sheridan (1865-1950) and was built on a site donated by Sir John Keane and with funding from the Carnegie Foundation.

It was designed in the Arts and Crafts style, with a single-bay, single-storey jettied box oriel window, a red-brick English bond wall on the ground floor, an inscribed cut-limestone band on the first floor, painted rendered walls on the first floor with painted timber frame-detailing, and a painted roughcast panel at the gable with bas-relief shamrock detailing.

The library opened in 1911, and has also served as the town’s courthouse on occasion, and is now both a meeting venue and a regular exhibition centre. 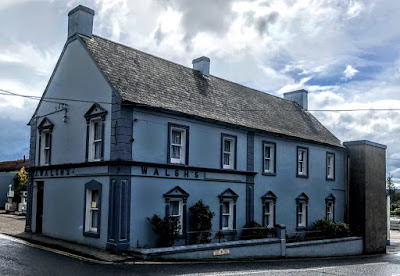 The former Walsh’s Hotel was originally the army barracks and then the RIC or police barracks in Cappoquin (Photograph: Patrick Comerford, 2020)

The entrance to Cappoquin House stands at the point where Main Street narrows and becomes Barrack Street.

The east part of Cappoquin is the newest part of the town. Yet, it is recorded in the early 18th century that the town’s military barracks was based here in Barrack Street, also known today as Allen Street.

The building later known as Walsh’s Hotel was originally the army barracks and then the Royal Irish Constabulary or police barracks in Cappoquin. The site housed a troop of horse or more and was the focal point of an attack by the Young Ireland movement on 16 September 1849. That attack in Cappoquin, which was the last action of the movement in Ireland.

Around the corner, Green Street was home not only to the village green but also to the fever hospital and the Keane iron foundry. 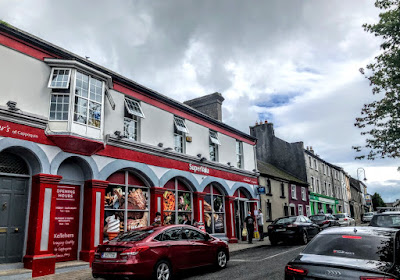 The shopfronts of Cappoquin bring back the memories of names and families (Photograph: Patrick Comerford, 2020)

At the other end of the town, Mass Lane, sometimes called Tivoli Terrace, was the route taken by Catholic churchgoers to the first church in the parish, which was built in 1750. The lane was once part of the Cappoquin-Lismore road and was then called ‘Old Chapel Road.’

Nearby, Cappoquin Bacon Factory, which once employed over 200 people, was founded by the Keane family. From 1907 to 1980, the factory was synonymous with Cappoquin and was west Waterford’s most important industry.

The company’s black and yellow vans and lorries are no longer common sights on the roads all over Munster.

The black and yellow vans of Cappoquin Bacon Factory are no longer seen on the roads of Munster (Photograph: Patrick Comerford, 2020)