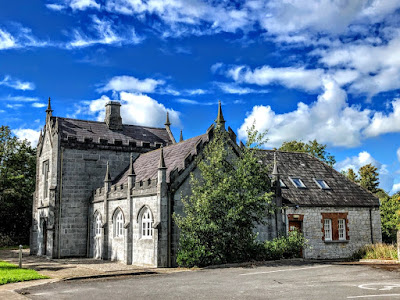 I was back in Cahir yesterday to look at three buildings designed by the Regency architect John Nash (1752-1835) that I had noticed last week during part 2 of my late summer ‘Road Trip.’

Cahir Castle, Saint Paul’s Church and the Swiss Cottage are the three main historical and architectural attractions in this Co Tipperary town.

Saint Paul’s Church and Nash’s schoolhouse stand side-by-side and complement each other, and with the Swiss Cottage, they illustrate the unique contribution of Nash to one provincial town in Ireland, and the role of a benevolent landlord in developing the aesthetic aspects of a town.

The Erasmus Smith schoolhouse was built for children of all denominations in Cahir, and was commissioned by the Earl of Glengall. It was completed in 1818 at a total cost of £1,034, making it the most costly school built in Co Tipperary at the time. The Erasmus Smith Trust provided £600 and Lord Glengall paid the balance.

The school is built of hewn limestone, with ornate embrasures and pinnacles. Each gable has a large blind Gothic window. The central part, designed as the teacher’s residence, consists of three floors and is flanked on either side by two large classrooms.

The teachers were William and Mary Wilde, a married couple, as was common at the time. In I824, the teachers had a combined annual salary of £60, as well as a house, garden and two acres of land. That year, the school had 131 children, of whom 90 were Roman Catholics and 41 from the Church of Ireland. Numbers continued to grow rapidly, and two extra classrooms were added by the 1830s.

In all, there were 17 or 18 Erasmus Smith Schools in Co Tipperary, and the best-known was probably Tipperary Grammar School.

Later in the 19th century, the building became the National School in Cahir ca 1860 and remained so until 1963. The building was later used as a sawmill and steelworks and fell into disrepair. It was thoroughly renovated in the late 1980s, and since then it has been used a museum, a school, and the South Tipperary County Council offices in Cahir.

The sites of the school and the church are separated by a curious ‘Ha-Ha’ or sunken stone-lined ditch or fence on the north side of the churchyard. It dates from 1812-1816, and was cut through the land when the site was being prepared to build church and the school.

The site chosen for the church and schoolhouse needed to be artificially elevated, because of the threat of flooding from the River Suir nearby. Two artificial hillsides were constructed, contained within a limestone wall and bisected by this stone-lined ditch or ‘Ha-Ha.’

On many large estates, a Ha-Ha served to prevent deer or cattle coming onto the lawns or into the formal gardens. In Cahir, however, the Ha-Ha probably kept schoolchildren out of the churchyard, although in the 19th century it was also used as a romantic walkway.

After many years of neglect, this central link in the Cahir Town Heritage Trail has been restored to part of its original purpose. 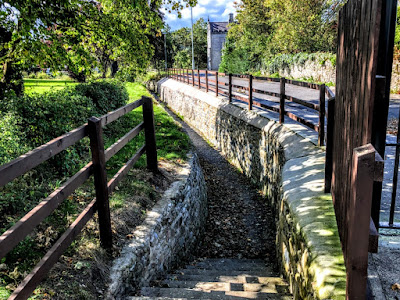 The Ha Ha in Cahir separates the sites of Saint Paul’s Church and the former Erasmus Smith School, both designed by John Nash (Photograph: Patrick Comerford, 2020)