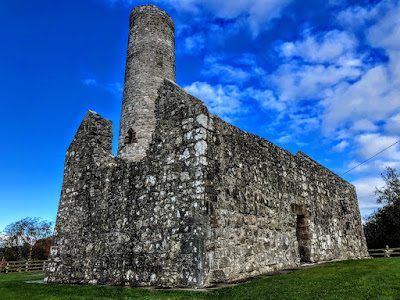 The church ruins and round tower at Dysert Oenghusa near Croom, Co Limerick, date back to an eighth century foundation (Photograph: Patrick Comerford, 2020)

After visiting Croom, Co Limerick, and its two parish churches earlier this week, two of us visited the former monastic site at Dysert Oenghusa, near Croom, with its church and round tower.

This was the site of a hermitage founded by Saint Aengus the Culdee in the eighth century, and was closely associated with the Culdee movement in the early Irish Church.

A monastery on the site was first mentioned in 1033, and the site includes a 20 metre high round tower and the ruins of a church dating from to the 15th or 16th century.

Dysert Oenghusa or Dísert Óengusa, which is now a National Monument, is in the townland of Carrigeen, 1.8 km west of Croom, near the headwaters of the River Maigue. 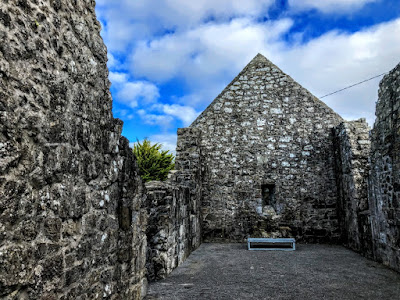 Saint Aengus or Óengus of Tallaght (Óengus mac Óengobann or Óengus the Culdee), an eighth century culdee, is believed to have founded a hermitage here in the year 780.

The Culdees or Ceilí Dé – Servants of God – were strict religious communities. Aengus came to the Croom area ca 780 and set up a hermitage at Carrigeen. He remained for only two years. He joined the monastery at Clonenagh, near Mountrath, Co Laois.

He later entered the monastery at Tallaght founded by Saint Maelruain, and was the author of the Félire Óengusso (‘Martyrology of Óengus’) and possibly the Martyrology of Tallaght. When Saint Maelruain died in 792, Saint Aengus left Tallaght and returned to Clonenagh, succeeding his old teacher Maelaithgen as abbot and he was consecrated a bishop.

As he felt death approaching, he retired again to his hermitage at Dysertbeagh, dying there ca 814 or 824. He died was buried at Clonenagh, and his feast day was commemorated on 11 March. 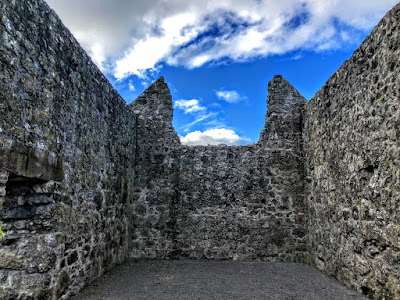 The hermitage at Dysert Oenghusa was succeeded by a monastery that is mentioned in the annals for 1033, and some early ruins on the site have been dated to the early 11th century.

The church, with antae, dates from the 15th or 16th century. It is a simple rectangle 15.5 metres (51 ft) by 5 metres (16 ft). The church was abandoned in later centuries and fell into ruin.

Later lore claimed the tower had been built in a single night by a witch. The site was visited and sketched by John Windele in 1833. 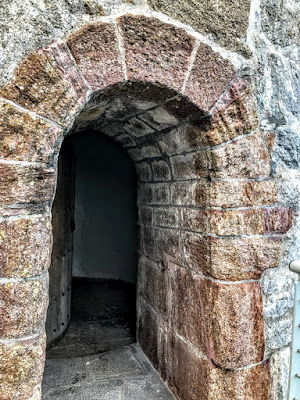 The door into the round tower at Dysert Oenghusa is 4.6 metres above ground level (Photograph: Patrick Comerford, 2020)

Dysert Oenghusa church and round tower were lovingly restored over a 9-10 year period in conservation work that cost €1.3 million.

Conservation works that were completed last year focused primarily on the round tower. During archaeological excavations beneath the tower to provide foundations for new stairs, extensive evidence was found of human remains, including 49 people who were buried beneath the surface east of the round tower.

A new steel stairs allows access to the first floor of the tower through the doorway and the internal wooden floors have been rebuilt. In addition, the site has been fenced and landscaped, signs have been put in place, and car parking space has been provided. 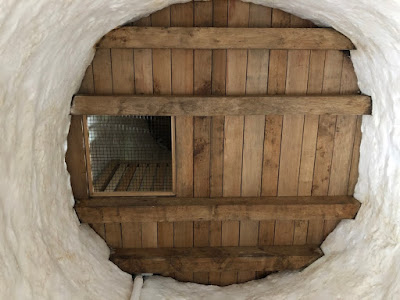 Inside the round tower at Dysert Oenghusa (Photograph: Patrick Comerford, 2020)

The tower and church were officially opened to the public last year [16 July 2019] after many years of conservation work. The tower is now accessible by the new stairs leading to the first floor, with entrance through the Romanesque doorway.

To reach the monument from Croom, follow the Church Road out of Croom towards Ballingarry; after about 2 km take a right to Eircode V35 TV05. 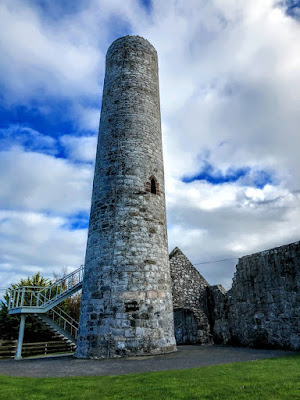 The round tower and church were opened to the public in 2019 (Photograph: Patrick Comerford, 2020)